The Rocky Mountain Coaster Company, the group behind the reinvention of the Texas Giant, are building their first coaster from scratch. Could this be the start of a major player in the industry?

The ride is being built in Silver Dollar City, home of S&S launcher Powder Keg and B&M looper Wildfire. Very little is known about the ride, but it has began construction already:

Background info on the ride:

ScreamScape wrote:
One of our readers who resides in the Spokane, WA area pointed out an interesting article in the local paper about the Rocky Mountain Construction Group. The article talked about how the group is building a new $1 million shop building in Hayden, Idaho where they will move their track manufacturing operations. This will also free up room for the group to begin building their very own roller coaster cars.

Why? Much like why GCI created the Millennium Flyers that could maneuver through their extremely twisted layouts, Rocky Mountain’s track system is simply capable of doing things other trains wouldn’t be able to do. According to Rocky Mountain, “We will be building cars we think will be revolutionary for the industry.” They go on to state that the combination of their new track and cars will be able to allow a wooden coasters to perform inversions, a feat no one has tried since Son of Beast at Kings Island.

Best of all the article also mentioned that the group has roller coaster projects planned for Silver Dollar City and Six Flags Fiesta Texas, both to open in Spring 2013. This matches up well with the reports from IAAPA where Rocky Mountain was reported as having two 2013 projects in the works. One of those was said to be a custom built wooden coaster project that would feature Rocky Mountain’s Topper Track. Could this be what Silver Dollar City has in store for 2013?

Speaking of the 2013 project, the SDCFans forum reports that ground clearing work for the park’s 2013 project seems to have started as soon as the park closed for the winter. They are working in the area just beyond the Giant Swing where the old train robbers shack was removed at the end of the 2011 season. And the biggest question is… if the park is getting a new Rocky Mountain coaster, will it have an inversion?

It seems likely that this ride will become the only operating woodie in the world with inversions.

Why not just build a steel then, if they want inversions?
Top

DiogoJ42 wrote:
Why not just build a steel then, if they want inversions?

1) There's a chance it'll have inversions, but not necessarily.
2) They already have a multi-inverting steel coaster.
3) Nearly everyone except you prefers wooden coasters for airtime and layout, and steel coasters for inversions and other "special effects" so if possible, why not combine the best of both worlds?
4) It's cheaper to build wood.
Top

Good for them I say. I know that technically this is a steel coaster rather than a wooden one but it does pave the way for someone to eventual try building a proper wooden loop. From what I heard Son of Beast's loop was fine, it was the rest of the coaster that had issues, the loops removal was just so that they could use lighter trains. I would like to occasionally see wooden coasters with a loop just for a slightly different experience.

Good luck to them I say!

What they did to Texas Giant looks great and I've heard lots of good about it. Should be very interesting to see what they can do from scratch.

This looks very good, I really like what rocky mountain did to New Texas Giant and just a quick question, didnt gerstlaurer do the trains for that? If they did then maybe rocky mountain could either go to gerstlaurer again or show off their own train design, it would be awesome if they used a similar design to gravity group.
Check my new RCT3 park
http://forum.towerstimes.co.uk/rct-and- ... ness-park/

Silver Dollar City looks like an amazing park and this is yet another reason why I'd love to go there one day.

There's also some more pictures of the new ride being built here.

Looks very different to other woodies! 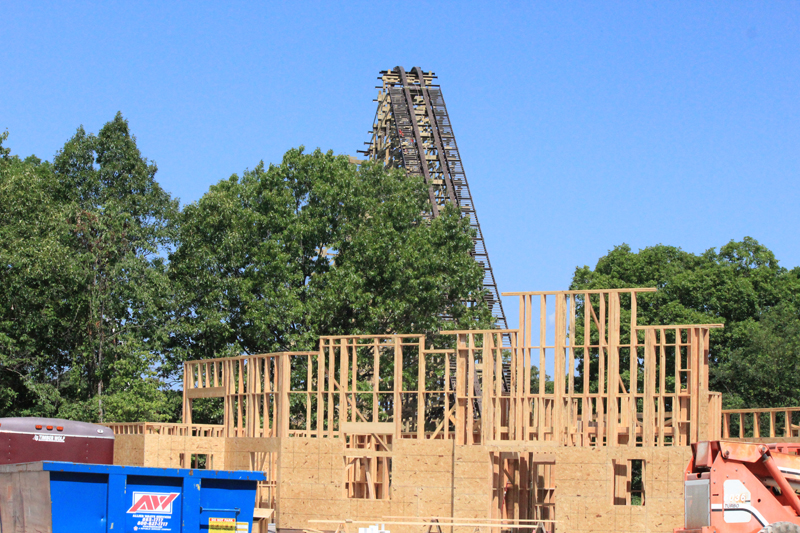 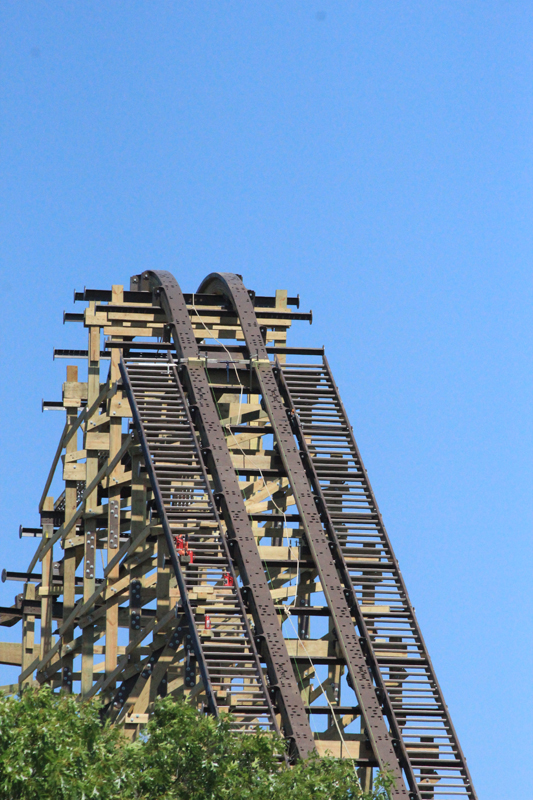 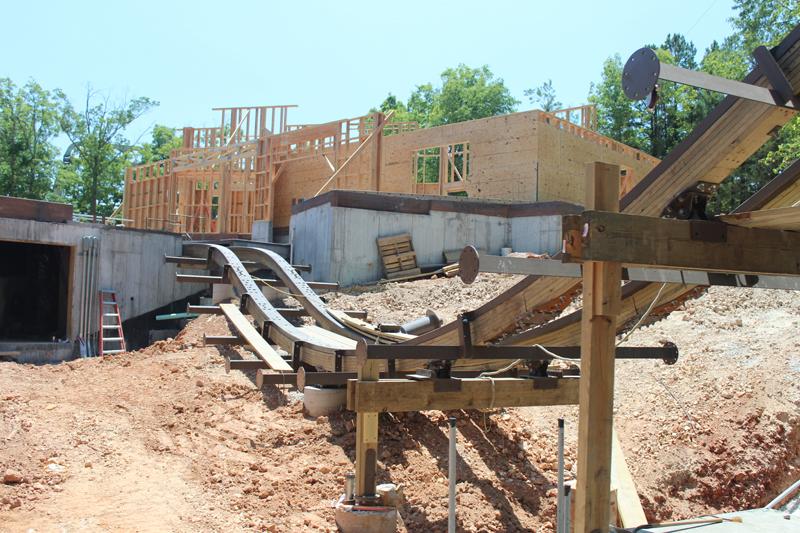 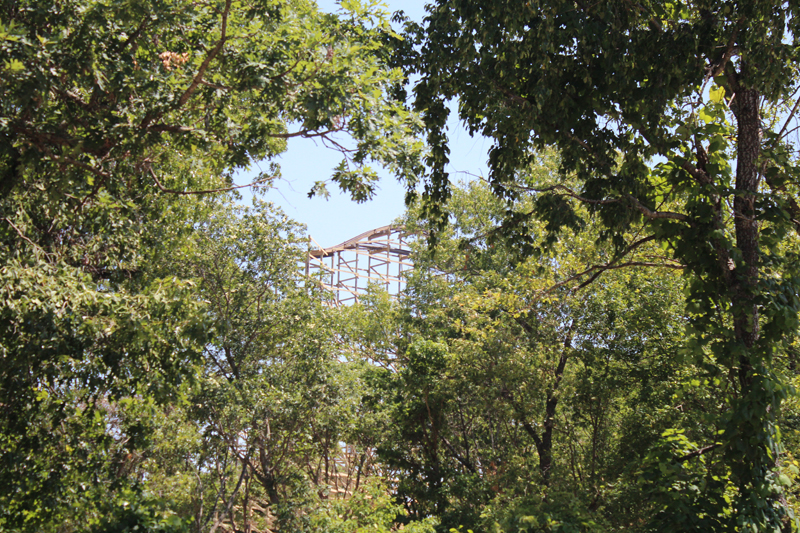 They've got that much done and still no official announcement???
Top

Just thought i would bring this up. For all you people that wants inversions on wooden coasters. This is Outlaw at Silver Dollar city.

That looks nice, but not sure how safe it will feel! Definitely has a partial inversion because you can see the brackets on the beam above the track! Have to wait and see though, will be looking forward to seeing whats going on here!

Jesus!!! Mind you it is probably safer than the looping coaster that there used to be, because that was ridiculous, however a zero G roll maybe possibly slightly better, providing there are sensible harnesses in place!
Top

That looks insane. I don't see how that could be anything other than an inversion, because of the metal cross beam. That track looks to go under it, and the only way for that to happen is to invert, or have a very nasty jolt.
Top

Don't give me nightmares, Please !!!
It sounds horrific are we having a laugh!

They is a new pic on this link. Nothing much new but shows this thing is going all the way over!!!!!!!!

Its not a zero G Roll by the looks of it, goes in and out the same way. It doesn't do a full 360 degrees so I don't think it is! Looks to be an extreme Stengel Dive like that on the new Skyrush coaster in America.

Thing is it still looks insane though!

yeah as said above if you look at the track bracing you can see the track does not go into a 180 therefore not really an inversion..more like a nearly inversion overbank. either way thats gona provide quite some headchoppers .
CHECK OUT MY FLICKR PHOTOSTREAM
http://www.flickr.com/photos/djthorpeimages/

ok so not a full inversion, but still, i never thought i would see anything like this on a woodie