This one slipped under the radar, at least for me anyway, I haven't seen any mention of it and it's been open a month!

It's the world's tallest water ride, made by Intamin, and is in the same Thanksgiving area as The Voyage. What's really interesting about it is the lift system. The boats float onto a vertical lift platform, that goes up one of two towers to the top of the ride, while the other tower takes the platform down to catch the next boat. The two towers bend away from each other in the middle so the boats can pass! It also goes upwards exceptionally fast. It looks to be that it must put massive pressure on the structure though, as the boat and platform is entirely on one side of each tower. :shock: 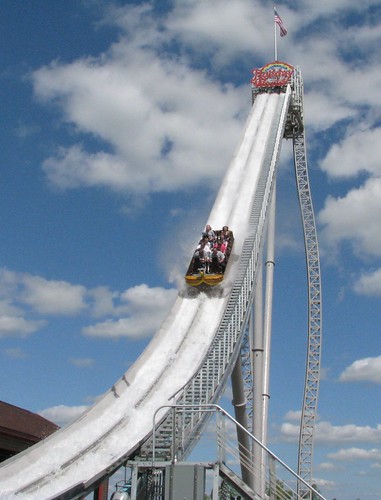 The new lift hill is the big thing here, for me.

Its going to open possibilities for parks to open large boat rides with a smaller footprint.

Bolton Warrior recently went and I have just nabbed this photo from his trip report:

You can see the lift hill in action in this one. I must say it does look pretty cool!

"Bolton Warrior" wrote:
Pilgrims Plunge, the worlds tallest water ride. It does seem to be having a few techinal problems like some brand new rides do but the ride itself is amazing. The lift mechanism itself is pretty unnerving. As for the drop, well you can tell it is as tall as it is as it goes on forever and you get really wet as well. 10/10

yes i wonder what uk park will get this first?
Top

The lift hill, whilst high, is nothing new. Mack wild mouse Matterhorn Blitz also uses a lift system which tilts so two can pass - and opened in 1999. Main difference on the Blitz is that two wild mouse cars travel up at the same time, with the rear car on the lift waiting just off the lift at the top on a block section for around 15 seconds. This allows the ride to have a capacity of just under 1,000pph which for a Wild Mouse is remarkable.

Plopsaland also have a Mack Super Splash which has a revolving elevator lift. See here.

It'll probably never come to the UK due to height restrictions - I don't really think it's much of a shame though considering Tidal Wave (Thorpe Park) packs much more of a punch.
Top

This looks pretty good to be fair, i would have though the running rails for the splash down can be adjusted for better weather to result in a wetter ride.

As for the structure, i would'nt say that massive pressure is being placed on the structure at all. The weight of that lift even with the boat on would be pretty insignificant in comparision to the strength of that structure. Hence why it was built in the first place at all!
Top

Apparently, even though the drop is huge, the splash made is really disappointing. Looks to be a good ride though.

The lift hill reminds me of the route to Thunderbird 3 (with the sofa going down to be replaced by an empty sofa). Epic.
Top

As has been mentioned by Khanage above (thanks for doing a better job than I would have by the way) I did have a couple of goes on Pilgrims Plunge while we were at Holiday World.

It is a really great water ride and has one great advantage over the UK's tallest one at Oakwood. You can ride it without the operators trying to crush the living daylights out of you when pushing down the harness. Pilgrims plunge has what looks like an over the shoulder harness at first but it is actually just a lapbar.

Some people may have seen the testing videos on harness that show only a small splash, but now the ride is up and runningg the splash is bigger and you do get pretty soaked.

As for the lifthill mechanism I have to say I found it pretty scary as did everyone else on the rides I was on as well, so in that respect I would say Holiday World and Intamin have done a great job in getting peoples adrenline going before the drop itself.

Will Koch, president of Holiday World, dies at 48

“Will was not only our leader, he was our dear friend,” park spokesperson Paula Werne said. “Our park family is in mourning for this sweet man who worked tirelessly to bring fun and happiness to so many families in the 20 years he ran the park.”

Koch died at home of what the family believes to be complications from diabetes. He was 48.

Very sad news :( Will seemed like a great guy who was very passionate about his park. He was highly regarded within the industry and by enthusiasts worldwide, for his enthusiasm and outgoing personality. Nobody seemed to have a bad word to say about him.

For me personally it is very sad, as Holiday World is somewhat of a mecca for wooden coasters, which I love, and it is very high on my 'must do' parks. Will also helped to design The Voyage, which is widely regarded as the No.1 wooden coaster in the world. It is said that he is responsible for the famous back to back 90 degree turns which I drool over everytime I see a POV.

Noooooooooo... he seemed like such a wonderful man. I wish every park owner had the enthusiasm simply for making an amazing park over profit that the Koch family had. So young as well...

He seems like a Roland Mack type figure- cares for the fun and enjoyment of guests over anything else. Such a shame to see these kind of figures go.

Holiday World already looks like one of the best parks in the world. Family run since the 1950s, the park boasts two of the best rated wooden coasters in the world in The Raven and The Voyage, with The Legend also regarded highly. The park is also renowned to have a fantastic family atmosphere, with free unlimited Pepsi offered to all guests. The park also built several years ago Wildebeast, which is without question the greatest thing ever added to a waterpark.

Here is a photo of Dan Koch, park president, holding the plans for 2012: It will cost $9 million and be announced tomorrow. Given the huge quality of the park's previous additions, even though I have never been I can't help but get excited about this. It's extremely likely to be a coaster, since they haven't built one since the Voyage and they wouldn't be making this much press noise for anything but a coaster. But will it be another woodie or will they mix it up a bit with a steel? Part of me wants it to be wood because they seem to be the absolute masters of timber, but I'd love to see what a park could do with a steel coaster.

The coaster announcement will be streamed on the park's Ustream channel at 11am CDT tomorrow, which is 5pm here (I think)...
Top

The largest single-ride investment in Holiday World’s history is announced today: The World’s Longest Water Coaster will open in Splashin' Safari next May.

“We added Wildebeest water coaster last year and it was a runaway hit,” says park president Dan Koch. “So we asked our designers for something even bigger. It’s so huge, we’re calling it Mammoth.”

Located east of Wildebeest, Mammoth will begin with a conveyor ride up the water coaster’s lifthill. Following the five-story drop at a 45-degree angle, linear induction motors (LIMs) will propel the six-person round boats up additional hills, into dark enclosed sections and through twists and turns. Mammoth will cover three acres, increasing the water park’s size to 30 acres.

“The new twist to this water coaster is the six-passenger boats—this is a brand-new design,” says Koch. “These round boats add tremendous capacity, plus riders may be facing forward, backward or even sideways. It’s all the fun of Wildebeest, plus Mammoth is taller, longer and wider. Starting next season we’ll have the two longest water coasters on the planet!”

Mammoth’s tallest elevation is 69 feet higher than its lowest drop. The conveyor-style lifthill replaces any slide-tower stairs, making the water coaster accessible to riders who might have difficulty walking up stairs.

Today’s announcement, on the 65th anniversary of the park’s opening as Santa Claus Land, marks the largest single-ride investment in the park’s history. Koch says the price tag for Mammoth is $9 million. In addition, Koch announced that the park’s 2012 season will be extended to include a family-friendly event called Holiday World’s Happy Halloween Weekends throughout the month of October.

DESCRIPTION:Mammoth will be the World’s Longest Water Coaster when it opens in May 2012. Using HydroMagnetic technology, the six-person boats will fly up a series of hills utilizing linear induction motors (LIMs). The water coaster begins with a 300-foot conveyor ride “lifthill,” followed by a five-story drop at a 45-degree angle. The drenching ride includes a total of six drops, adding up to 282 feet of total “drop.” Mammoth’s length is the greatest of any water coaster in the world: 1,763 feet, a third of a mile.

FEATURES: Located in Splashin' Safari, Mammoth begins with a conveyor ride up the water coaster’s lifthill. Following the 53-foot drop at a 45-degree angle, linear induction motors (LIMs) propel the six-person round boats up five additional hills, through five enclosed sections and around twists and turns.

TECHNOLOGY: HydroMagnetic technology utilizes LIMs to propel Mammoth’s boats up the water coaster’s hills. An alternating magnetic field beneath the slide surface propels the boats, pushing them rapidly and smoothly uphill. LIM technology is a popular feature in some steel roller coasters.

WORLD RECORD LENGTH: Mammoth’s length is 1,763 feet (1/3 of a mile), making it the World’s Longest Water Coaster. (The park’s Wildebeest water coaster will fall to the #2 position when Mammoth opens.)

DROPS/ANGLES: The first drop is 53 feet, at a 45-degree angle. Together with five additional drops, combined length of the “drops” is 282 feet.

RIDE HEIGHT: Mammoth is 69 feet tall, from the lowest to the highest heights.

SPEED: To be determined during Spring 2012 testing.

RIDE TIME: To be determined during Spring 2012 testing.

STAIRS: None! Riders begin at ground level and ride up a conveyor.

When I read Water Coaster on Screamscape earlier I was thinking Poseidon @ Europa. Not a Master Blaster. Oh well.
Top

Well, this is cool too I guess Holiday World. Sounds like fun, hope you do well from it.

To be fair, the waterslide does look rather impressive - but I was expecting a steel coaster to be honest after they asked a large bunch of enthusiasts a survey about wood vs. steel for a new addition.

Although saying that, they could design and plan a new coaster in a matter of months, so I guess a coaster could be the next big addition. Slightly off topic, am I the only person who can't seem to get onto the park's website?
Top
Post Reply