Has anyone been keeping an eye on this coaster under construction at Ferrari World?

Its Its name may be changed before opening but right now its called "F1 Coaster" and its set to be the fastest coaster in the world with a launch close to 150mph!

If Ringracer in germany continues to be delayed then F1 coaster could steal the "Fastest Coaster" title before Ringracer even opens.

Youtube:http://www.youtube.com/watch?v=HNiHpuy41W4
Are you INTIMIDATED by the new 500ft tall launched Pinfari log flume with 3 side-by-side circular loops and splashdown on fire?
Top

Interesting, although I can't help but feel gutted for Nurburgring. This looks like it will be a good coaster.

So TPR posted this video from IAAPA from Dynamic Attractions on their immersive SFX dark ride coaster set to debut in 2015. Needless to say it looks pretty decent.

Re: SFX Coaster from DA for Ferrari World Abu Dhabi (2015)

I just saw this, and it blew me away how awesome it looks! but I do hope they sort the transitions out

Re: SFX Coaster from DA for Ferrari World Abu Dhabi (2015)

This topic has went rather quiet! New information has surfaced.

Below are MAJOR spoilers to the ride.

The top speed of the attraction will be 45 MPH - this being achievable by using various LSM sections, and the ride will feature 2 inversions, a corkscrew and vertical loop. Both special elements will be supported by screen to give riders a truly immersive experience.
The 'Rocker' section of the ride will move riders in approximately 70 angular degrees - from the sloping position the ride will then speed backwards through the vertical loop, and the sideways drop will supposedly be caused by a 'movie like explosion'. The trains are rumoured to seat nine, 4 in the front, 5 in the back.

An opening date has not been revealed as of yet but construction of the track in China and ride in Abu Dhabi has started.

Here is the proposed layout - Here are some photos of the track - The track does look rather strange - made in China it is then shipped to Abu Dhbai! Im not sure on the logo or name.

Here is the map for those who care - I believe this attraction is on the right and rumours of a water ride being on the left are also circulating.
This is very exciting, and really makes me think that even though the ride is on a small site it can have a lot in it! I hope the UK will eventually get a ride like this as a second one has been rumoured to open in Asia 'not before 2016'.

Two more Intamin extreme coasters that are being installed in Ferrari World have surfaced. These are both projected to open in 2016.

The first - Flying Aces is claimed to be shattering two world records one for steepest rollercoaster drop and the second for tallest loop standing at 170ft (52M) which matches the height of the current world's tallest overall inversion found on Gatekeeper at Cedar Point. Not much else is known about 'Flying Aces' other than "Flying Aces is inspired by Italy’s “ace of aces” Count Francesco Baracca, a famous Italian aviator of the 1900s whose legendary Prancing Horse emblem was inherited by Enzo Ferrari.". This is made by Intamin. This is rumoured to be it's logo -

The second very little is known about other than it will be an extreme Intamin shuttle coaster.

Ferarri World is definately looking up! With an SFX coaster this year, another dark ride for this/next year and two more coasters for 2016!

How does this park have so much money? I know that this park is in Abu Dhabi but if they have any rivals they rivals probably won't be around much longer

NemesisRider wrote:
How does this park have so much money? I know that this park is in Abu Dhabi but if they have any rivals they rivals probably won't be around much longer

They are aiming to open 7 attractions over the next 3 years (2015-17) with 4 being announced, Mission Ferrari (SFX Coaster) [2015], The rumoured-to-be water attraction [2015/16], Flying Aces (New Coaster)[2016], and the unnamed Intamin shuttle coaster [2016] as well! This leaves 3 to be announced, from the looks of things they will likely be minor attractions such as a 4D Cinema or flat rides of some sort. I would be surprised to see another coaster with the 5 they will have by 2017, however Ferrari keep pulling surprises out of the bag, who knows what 2017 will bring?!

Although the video in this article is just about Dynamics Attractions' overall growth into the Asian market, it does feature some footage of the 'Tilt and Drop'/'Rocker' hardware that's heading to Abu Dhabi. It's certainly a big piece of kit, and puts into perspective the scale of this attraction.

That tilt and drop is huge. I was not expecting it to be that big. This project is going to be amazing.
Top

That tilt and drop is massive! The size of it makes me wonder if an SFX coaster is still viable for 2016 at Thorpe Park

WOW!! This would fit in so well at Thorpe Park, how much was this to build?
Top

Flying Aces has gone vertical, track and supports being put up. 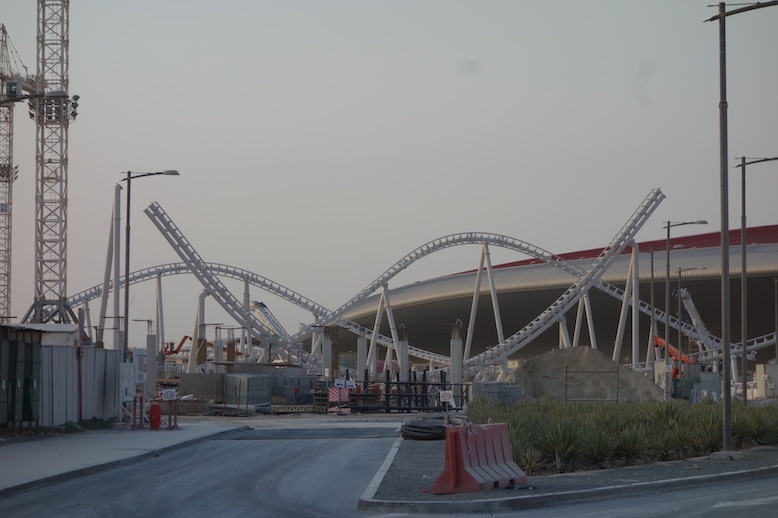 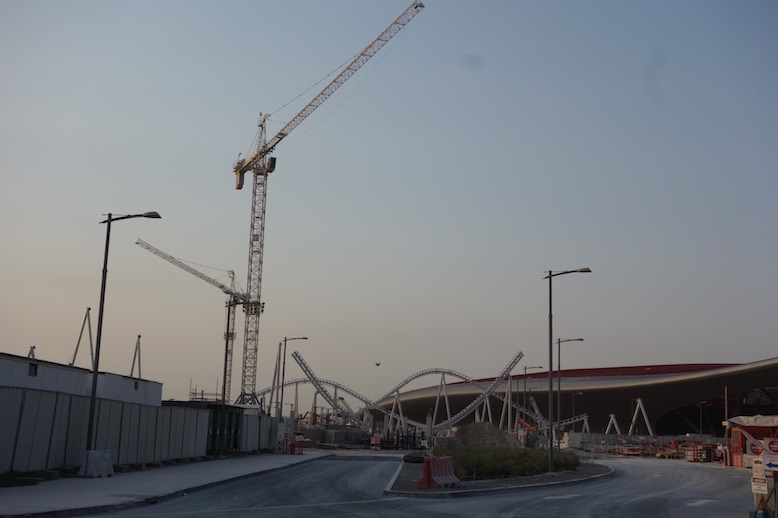 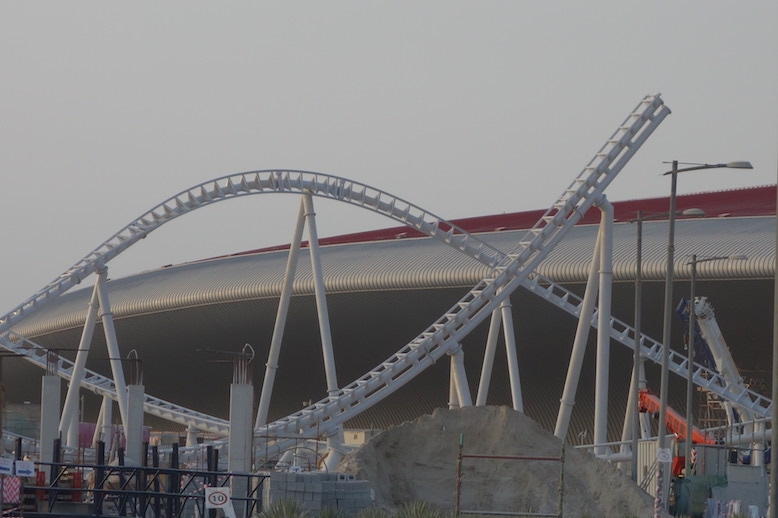 This is the winch for Formula Rossa: More of Flying Aces has gone up, as can be seen in these photos from ThemeParkReview. 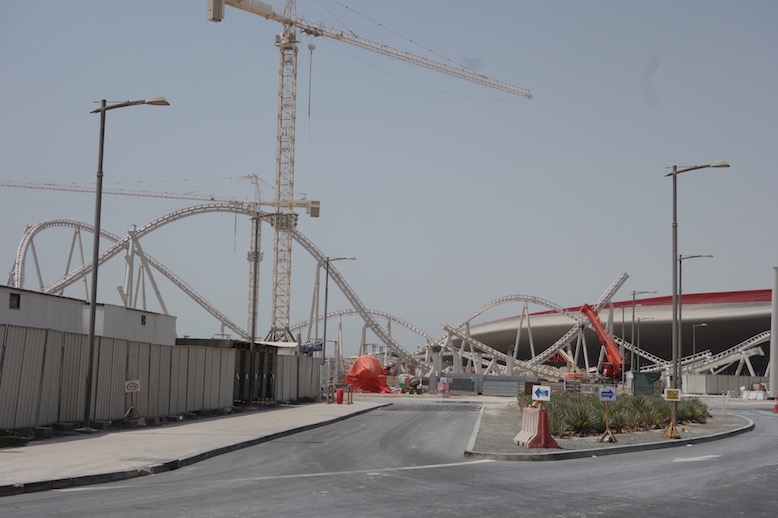 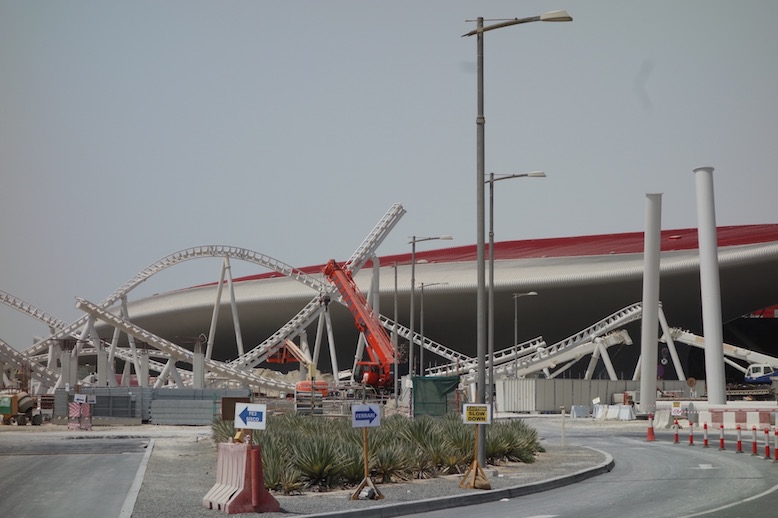 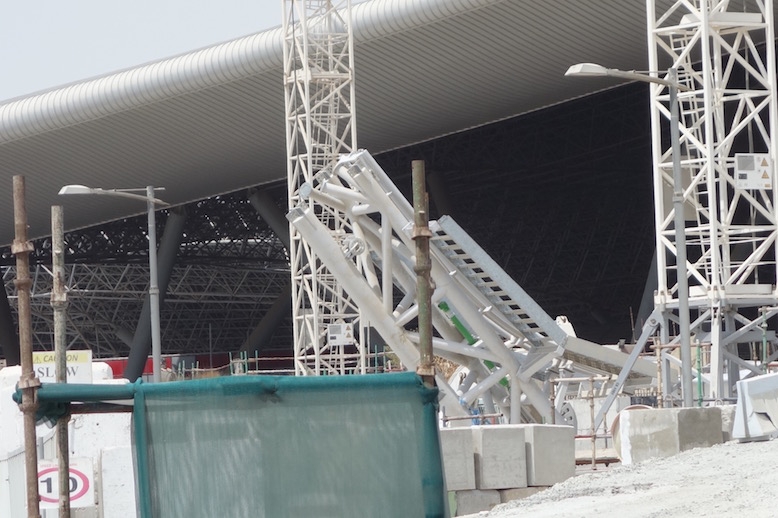 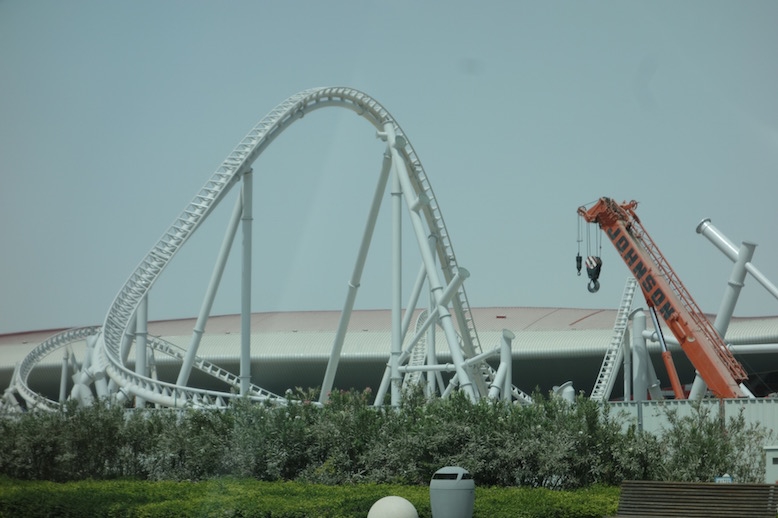 I wasn't aware Flying Aces was going to be a lift hill driven ride! If so I believe it's the first coaster Ferrari World are getting with an actual lift instead of a launch is it not? Either way it looks brilliant, looks like another quality Intamin going in!

Ferrari World have shared this absolutely stunning photo of Flying Aces...that's it - I need to get myself to Abu Dhabi! As i live in this part of the world i went to the park a few weeks ago and i wish i could of taken a few pics but i saw some black supports in a section next to GT Challange, so this might be mission ferrari?! Flying aces looked impressive and at first i miss took it for formula rossa! ( due to the track being the same color and by intamin)
Top

Some recent construction photos of Flying Aces, with the lift hill and non-inverting loop now up. This new video has now been put online stating some very interesting facts! Including the lift's height of 63 Meters and that riders will experience approximately 5G at the base of the initial drop!

It was also stated they are aiming for "new year 2016 opening".
This Intamin hyper coaster is going to be amazing!