Another potential thing to consider is any near misses with pre-existing rides... Hersheypark has a lot of rides close together in Comet Hollow, so there could be those...


But I don't see the point in having one seat in a row with a floor... This is my issue... It's just kinda pointless to me and no doubt could easily cause issues with guests arguing over where they want to sit and other crap...

Two rides in one maybe?

It will get people thinking "Whoa that's big" "Whoa hang over the edge!" So they get the people that want to be dangled by their bum cheeks over a 200ft+ drop and the others who are just there for the nice hyper experience.

Also looking at Intamin's standard train design it is most likely that they have just (in theory) stuck another couple of seats on the side increasing through put with out having to desing a whole new train.

Everybody is doing 4 passengers per row seating now. Even Vekoma have a design in the pipelines.

Vekoma already have done their 4-across. It's basically a rip-off of B&Ms design, but it is very very nice. I just don't think anyone has bought one yet.

It's highly unlikely this will have two rows of seats per car. Hypers normally have long trains, but even if this had the five cars they use on smaller rides, then that would be 40 riders. That's probably a bit unrealistic (plus the outside seats will be too close to really make the floorless feeling work), but it would be very impressive if it did have a full size train and two rows of four.
Top

"Blaze" wrote:
Vekoma already have done their 4-across. It's basically a rip-off of B&Ms design, but it is very very nice. I just don't think anyone has bought one yet.

"Blaze" wrote:
Vekoma already have done their 4-across. It's basically a rip-off of B&Ms design, but it is very very nice. I just don't think anyone has bought one yet.

Not sure how many ways there are to do 4-across seating so they are bound to look similar.

/ Leave bigger gaps in between the seats! :P

".Will" wrote:
Love the idea of the outer seats. It will make the whole ride a little bit more special especially as you are hanging over the sides over 200ft in the air that'll prove to be an experience.

The next logical step is a Hyper Wingrider.

Gawd everything will be a Windrider soon!

See thing is on a Wingrider you sit next to the tracks so making a flying version would be a little bit pointless like a Wingrider Dive Machine or an Inverted Wingrider.

To be honest though you could 6-across seating but that would be a bit too heavy. I was thinking more hyper (or as Benzin likes to call them giga) coasters featuring Wingrider trains. Hanging over the edge that high up in the air would be amazing and it would be an awesome experience almost out of your seat with no restrictions of having a train around you.

In a way Intamin are doing this I think they have been very smart with what they are doing here. It has potential and will set the bar for the future me thinks. Certainly one to watch.

".Will" wrote:
See thing is on a Wingrider you sit next to the tracks so making a flying version would be a little bit pointless like a Wingrider Dive Machine or an Inverted Wingrider.

See - I think a flying wingrider would be absolutely incredible. The problem with the current flying coasters, is that no matter how close to the flight experience they can get, you can always see this big blocky B&M track above or below you. However, if you were to put the seats on the side of the track - with just a small arm to connect the seats to the track, preferably behind the chairs - you would have pretty much unrestricted views (especially the front row), and it would be the closest to actual flying a coaster could get. You would be completely out in the open, with no track above, below or on one side of you. I think it would be astonishingly great, and I wouldn't be surprised if it happens in the next decade.

".Will" wrote:
I was thinking more hyper (or as Benzin likes to call them giga) coasters

A Mega Coaster or Hyper Coaster is a complete-circuit roller coaster with a height or drop greater than 200 feet.

:)
A Giga Coaster is a complete-circuit roller coaster with a height or drop greater than 300 feet.
Santa Clara
Top

I did think that but with the postion your in you don't see that much of the track.

As for the difference between giga and hyper I am aware it was a little bit of a joke between Benzin and I.

"Benzin"&quot;][quote=&quot;"Blaze" wrote:
Vekoma already have done their 4-across. It's basically a rip-off of B&Ms design, but it is very very nice. I just don't think anyone has bought one yet.

[/quote]
Ah yes. But can you blame me for forgetting that piece of crap? :lol:

"Blaze" wrote:
Ah yes. But can you blame me for forgetting that piece of crap? :lol:

I am a fan of the new Vekoma trains. They look sleek but just a little bit 90s. Pinfari esque! Shame they are not more like the concept now they look good.

Yeah, they do look great. Shame about the ride they're attached to.

One of the American SLCs have a four across inverted train. (As does the inverted counterpart to that junk in Asia.
Top

I think it's a bit harsh to call Battlestar Galactica crap when you know very few people who have been on it. Admittedly it doesn’t sound too great; sort of like they designed the Cylon side then added the Human just to give it something to battle with. Anyway I heard it is quite good for a mild thrills audience.

".Will" wrote:
am a fan of the new Vekoma trains. They look sleek but just a little bit 90s. Pinfari esque! Shame they are not more like the concept now they look good.

It looks incredibly dull. The lift hill is the fastest part and then they slow at the the top. Silly. The invert side looks really decent, or would if was a bit faster, but the sit down side looks really, really gash.

Everyone seems to be talking about the trains and not a lot about the actual ride which is a shame really. It looks like a decent layout albeit a little short, but when you see just how cluttered Hershey is then it's understandable. It still looks pretty neat. :)


Okay, back to the trains, I agree the gimmick is pretty awful being half as good as the Floorless gimmick which isn't even anything special either if you're not in the front row. I can see the station being an unnecessary pain as well if it needs a retractable floor for the floorless cars. I know it might be wrong or just a minor point but I could see Intamin adopting the four-across design possibly to have shorter trains which might help with sharper transitions and shorter brake runs? Probably wrong, I know but in a park where space clearly looks to be an issue, I can see Intamin catering for it as well.

Looking forward to the massive erection of it now blahblahinnuendoblahblahblah.

The track is similar to I305 track except it appears to be a little wider or is that just me?

Okay, slight bump of topic here, but this is a coaster that seems to have slipped under TTF's Radar it would appear.

Yes, here we have Intamin's 2nd attempt at a Winged Coaster, 5 years after their first generation Wing-rider, Furius Backache, flopped. This however, is a totally new take on the design and sees Intamin adding winged trains to a standard coaster as apposed to a launch. They have also made modifications to the trains, only making the outer seats winged, which is still a rather controversial decision discussed among the enthusiast community. These new trains also seem to feature lapbars of a similar style to Blue Fire going on the concepts seen here.

So, why am I bumping the topic, well in the past few days the lift and drop has infact being topped out, all be it about a month behind schedule thanks to Hershey's reputation for flooding and the fact this coaster is built over the river!

So there we have it, the tallest 'winged' coaster in the world, standing at exactly 200ft. Personally I think it could be a good ride, it certainly looks great and with the possibility of lapbar style restraints it could eliminate the roughness often complained about with the Intamin OTSR's.

Below are some more images of the current state of construction; 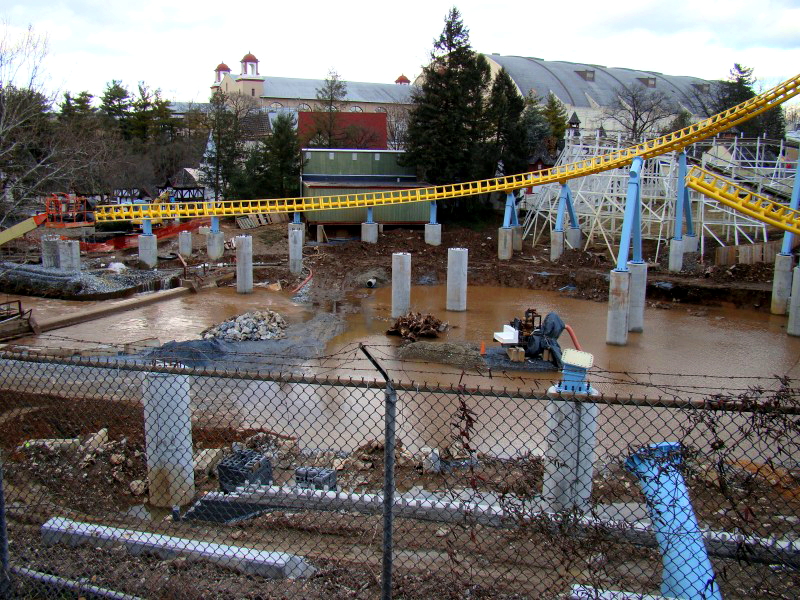 It definitely has a look of the newer Intamin layout style seen on the likes of I305, which gets good reviews, it's very, dare I say it, 'Twisty'

Anyway, on with the discussion people :p
Top

Why does the lift and the first half of the drop look like that?! Not permanent I hope...
Top

I believe that is the frame work of the structure, you can just see the start of the track beginning to be installed on top of it on the first drop. It is similar I guess to the frame on I305's lift hill structure.

Users browsing this forum: No registered users and 70 guests
×