Universal have filed for multiple new patents which may reveal plans for Volcano Bay as well as future rides that use Marvel and Nintendo IP. The full report can be found by clicking on this sentence. OK, essay time!

In terms of the patents, I love the new take on the trap door slide. As for the flying theatre, I'm not sure how such a close fitting restraint would work, or indeed be comfortable for different body types but I assume that is something they're working on.

Of course, the most exciting patents shown for me are the last two, as they may be the first hints as to what some of the new Nintendo attractions at Nintendo could potentially look like since although no IP is specified for the patent, the design of the rides seem to fit . The first is a go-kart style vehicle with room for two riders. The rider in front controls the speed and drifting while the rider in the back can push buttons to make the car bounce or affect other riders. Straight away, the ride reminds me of the game Mario Kart Double Dash!!, with one player driving and the other throwing items at opponents.
The question for me is whether this will be a track ride like Test Track or Radiator Springs Racers where drifting at the right angle increases the cars speed; or something closer to the old Rocket Racers ride at Legoland Windsor where the ride is essentially a customisable arcade game with 8 or more players. While the patent would suggest the former, the latter option seems like a more efficient option for space, especially considering that only one group would be able to race on one track at a time and that such track would have to be rather wide to accommodate for the number of vehicles usually found in a game of Mario Kart.
If they do go down the Lego Racers route, they may wish to allow up to 12 cars in one race to fit modern Mario Kart. With two riders per car and 5 races happening at once (again based on Rocket Racers), the attraction could potentially support up to 120 riders at a time, with additional riders in a pre-show. Including setup and based on an average 3 lap game of Mario Kart, each race would likely take roughly 3-5 minutes, leading to a theoretical throughput of between 1440 and 2400 people per hour (although I really doubt that second number would ever be reached.)

Additionally, a new roller coaster concept was also submitted by universal, with the vehicle guests sit in actually not run on the rails directly below them but on a lower rail hidden out of sight to appear as if the ride vehicle is jumping from track. The minecart shape of the vehicle and idea of track jumping is similar to what is found in the Donkey Kong country games so rather than go on and on about the possibilities, here's a video of one of the minecart levels from the most recent game.
1. Helix | 2. Taron | 3. Nemesis | 4. Expedition GeForce | 5. Wodan
Top

Yet more news regarding Universal, specifically The Wizarding World of Harry Potter: Hogsmeade. Insiders are claiming that Universal have been planning a brand new night time show including projection mapping for the Hogwarts castle within Hogsmeade set to premier in summer 2017. This makes sense as recently the tree line surrounding Hogwarts was trimmed, and although Universal put this down to making more room for photo opertunities I wouldn't be surprised if this was also to cater for projection mapping equipment. The event is only expected to run through Q3 (July - September) of 2017, although I would anticipate a Christmas refresh would be in order for Q4 (October - December).

This is definitely an exciting development and one I've personally wanted implemented for some time, and after seeing the work done with Hogwarts at the opening of Hollywood's Wizarding World it truely could be magical.

No other information is currently available, however you can watch the universal Hollywood show here.

The more I hear about Race Through New York Starring Jimmy Fallon the more I like it! More information has came from the man himself regarding the attraction (of which he has now experienced guving an indecatir of how finished the ride is inside), including confirming the attraction is a full immersive experience featuring 3D, water spray and specifically, the smell of pizza! He also mentioned you will dive into rivers, sewers and even fly to the moon! The ride is expected to start with you Sat as though you are about to watch a filming of The Tonight Show, and eventually the seating raises and you get into a head to head race against Jimmy, explaining why the facade looks like the filming location of the show. Speaking of which.... Now I must say compared to what was previously here this does look fantastic, with every detail thought of. Race Through New York Starring Jimmy Fallon is said to be opening in "March/April time" according to Jimmy.

I really hate the farcade. Having grey everywhere makes everything look bland and even the finished section looks incredibly boring. It is nice to have special effects but soarin and other 4d attractions have them.
Top

ThemeParkCrafter wrote:
I really hate the farcade. Having grey everywhere makes everything look bland and even the finished section looks incredibly boring. It is nice to have special effects but soarin and other 4d attractions have them.

Seeing as it's a recreation of a genuine building I'd say they've done pretty well. Not to mention it's yet to be completed. It's far superior to what was previously there at the end of the day and miles ahead of something like Frozen Ever After.

Volcano Bay has officially started hiring staff, including waiters and a restaurant greeter confirming a sit down restaurant!

We are only 4 and a half months away from the opening of Volcano Bay which mean's work is really starting to wrap up! Also, soft openings for the park are rumoured for May...

The entrance is getting some new landscaping, and also features added Volcano rocks (shown by yellow arrow). We have water slide testing! Yes, some of the slides around the park are finally testing including these... We also have some new landscaping, really showing how close this park is to being finished! A look at the near to finished water coaster station Here are the drop slides, as shown by the lower yellow arrow. Finally, the roofing for a slide complex is being finished! Krakatau is finally having scaffolding removed meaning the final texture will now have been added! I am personally very excited for Volcano Bay now. Not long to go now!

Original and higher quality images can be found on Bioreconstruct Twitter.

Except for being probably the best themed waterpark ever

Especially that big Volcano in the middle, it's really huge when you see it in person!
SeaWorld has rescued over 35,000 animals in need![/i]
Top

Nah, just a great big whopping Volcano that erupts water in the centre with the back blown out hiding 5 slides within it. Nothing new really

Plus there's plenty of slides which haven't been utilised before in the Orlando area, oh and the Tapu Tapu technology which might be a game changer for water parks

But yeah nothing new

In fact I don't believe anything has been taken from Wet N' Wild, with this being Universal's new start. Then again from what I hear many wanted a couple of the older slides to make their way over but unfortunately that doesn't seem to be the case.

Speaking of which it looks like Universal have already set plans in motion to demolish Wet N' Wild, They just don't stop do they!

They want rapid expansion of hotels. It is likely a 3rd park is being planned
Top

From whats been announced it doesn't look like anything will be used in the new park, will be interesting to see if they sell on the newer stuff or just send it all for scrap.

ThemeParkCrafter wrote:
They want rapid expansion of hotels. It is likely a 3rd park is being planned

I wouldn't say it's likely, one is being planned, they also want to have 15k hotel rooms so doubling what they have at the moment.

The word from the insiders is that it's likely WnW will hold 1/2 hotels and possibly a transportation centre.

A new theme park for Universal Orlando Resort is currently being planned to open on some land close to SeaWorld. The Wet n Wild land may be used for new hotels, a new bridge into the resort, or both. With Universal planning a new park, and SeaWorld adding more and more rollercoasters and SW/Universal working together much more frequently, Disney need to watch their backs!
SeaWorld has rescued over 35,000 animals in need![/i]
Top

The Tonight Shop has officially opened to guests today, offering a range of Race Through New York, Tonight Show and NBC merchandise!

Had this for a month or two but it slipped my mind to post it! I was lucky enough to receive an official Volcano Bay tote bag and so this gives a first glimpse of merchandise! 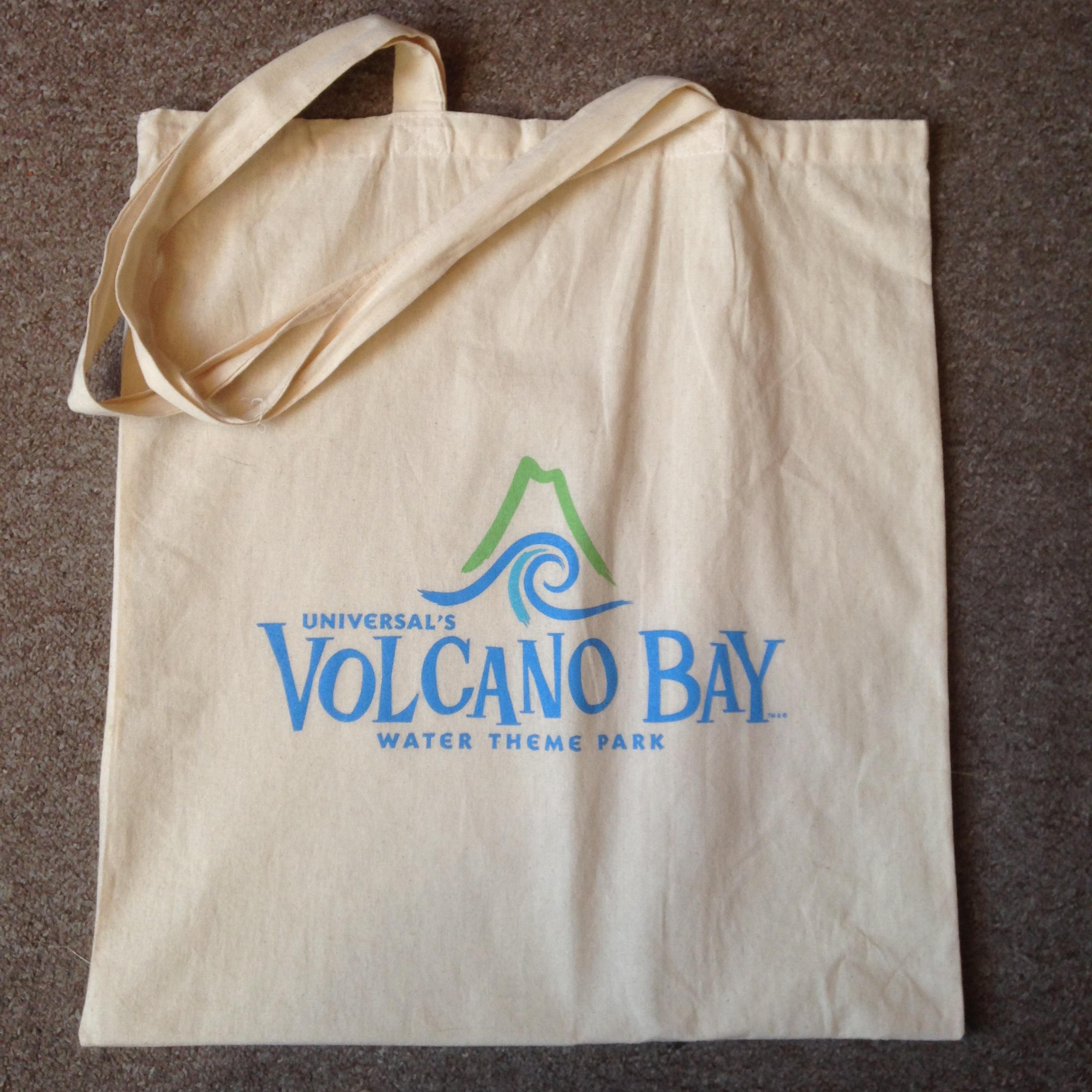 The back of the bag has no print however the one on the front is of a very high standard!