It's a weird review because it fails to mention any of the other things that were obviously operational, and doesn't actually review the park rather complains about it not being ready for a media day (which is quite common in Orlando it seems) which is completely understandable but hopefully it's sorted for the actual opening for which people are paying to enter the park. Whilst I do think all reviews have been a bit bias I'm still on the fence, it'll be today where we will see some better balanced reviews I think!

Also I wasn't going to say anything but why must everything have to bring in 'cultural appropriation' nowadays? It's an issue but is it really an issue here, in a theme park based around a fake island. These places are designed as a way to escape all that, can't we just enjoy fantasy for what it is and stop getting offended by everything?

Owen wrote:
Also I wasn't going to say anything but why must everything have to bring in 'cultural appropriation' nowadays? It's an issue but is it really an issue here, in a theme park based around a fake island. These places are designed as a way to escape all that, can't we just enjoy fantasy for what it is and stop getting offended by everything?

I completely agree there. The point of an area themed to a country or region is not to give you an accurate reflection of life out there - it's for you to get immersed in a fantasy about escaping to another side of the world.

What with Animal Kingdom, Aquatica, Busch Gardens Tampa, and other parks in the area which are clearly themed to a specific area(s) of the world, these people must find a holiday in Florida very triggering.

Ah the evil 'cultural appropriation' strikes again! Because what enriches people culturally more than telling them that they're forbidden from exploring cultures other than their own or that you can't do things because you have the wrong language/birthplace/skin colour!

My feelings about France? Well they conquered us, then we occupied parts of France later on and there are influences from France spread throughout our culture and language(and vice versa). Not a great example if they want us to be outraged, we share a lot of culture with France whilst still being distinct, that's the great thing about sharing and learning about cultures.

As for the review, I get a lot was closed but it would have been nice to learn about what actually was there.
Top

Volcano Bay is a little bit popular today, with the return times for Ohyah&Ohno peaking at 5 and a half hours and Krakatau Aqua Coaster peaking at 6 hours!

The TapuTapu service works fantastically, even alerting you when an attraction has a delay and when it reopens!

Here's a walking tour of the park, giving a nice idea of the scale of the park!

Generally I've liked what I've seen of Volcano Bay, however the back-side of the volcano itself has stood out to me as being poorly finished (unless there is more to be done). The exposed metal support structures for the stairs up to the trapdoor slides look fairly ugly really, and the portion of the action river which goes partially into the volcano on that same side seems like a missed opportunity, with guests instead being taken through a vast structure of supports and pipes for the slides above. 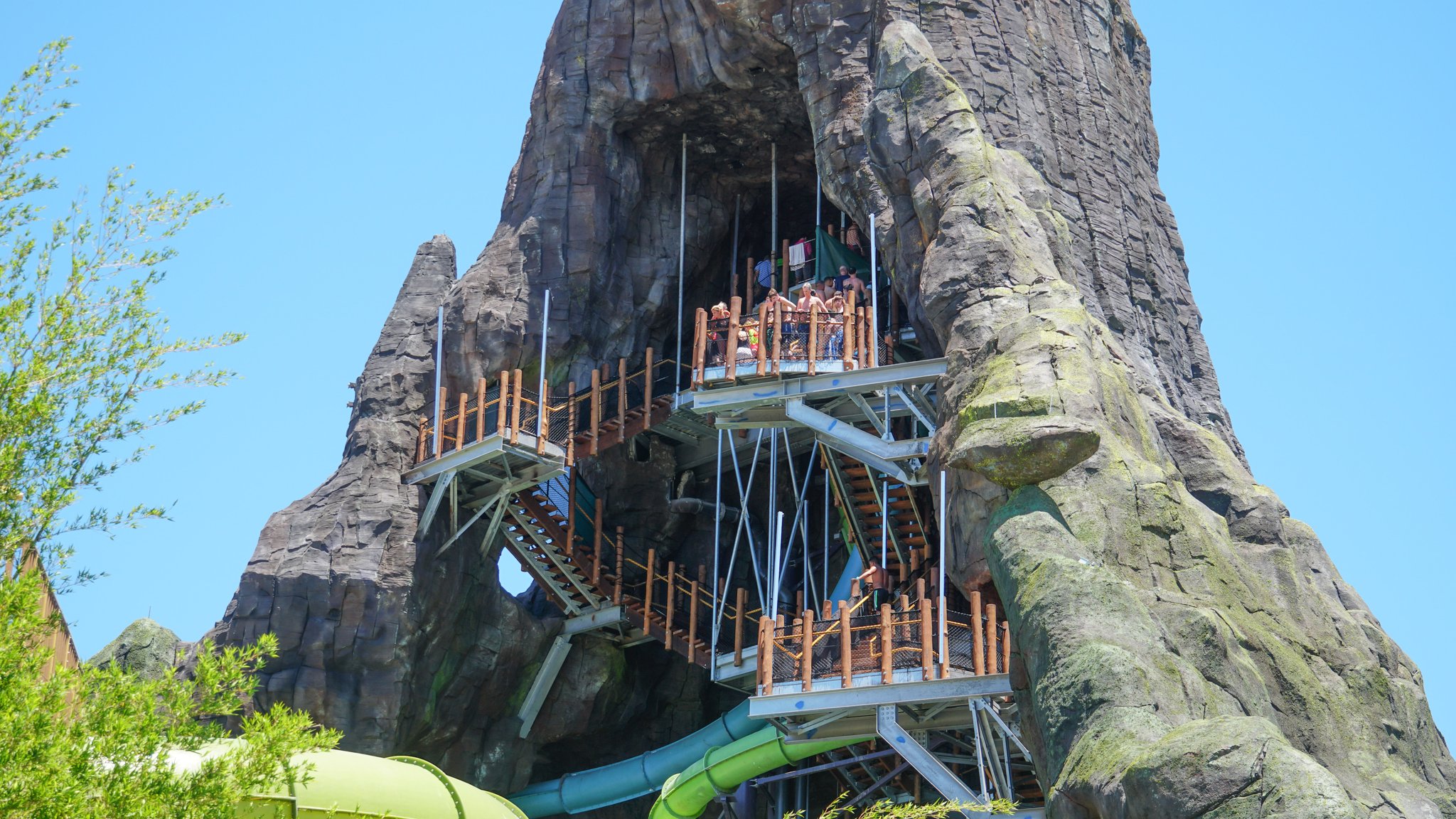 Its all the exposed metal, I mean, they haven't even painted it or clad it with wood!!

I'd anticipate they ran out of time, the park is still fairly behind schedule with various sections still yet to be complete. I'd hold off for a month to see if anything happens with that!

Fingers crossed they'll sort it out... there seems to be some sort of issue with the back of Orlando mountains being unfinished!

I'm not sure if it's been mentioned previously, but Universal no longer allow ANY items to be taken in your pockets on their big rollercoasters, and have set up metal detection scanners on entry to Hulk, Dragon's Challenge etc.
Top

A user on the themeparx found an image possibly showing the layout of Super Nintendo World in Orlando! Unfortunately this looks to be fake, as many things labelled are either not experected or confirmed as not to be making an appearance in phase 1!

We also know that the attractions are likely to be in separate buildings and be situated in the correctly themed areas, so it wouldn't make sense to have 3 attractions in one building separate from the area they link to!

Here's a possible layout if HHN27 based on what we know and rumours, created by @HHNightmares!

The Blumhouse attraction is rumoured to be based on either Ouija: Origin of Evil or Get Out. I'd expect that the final lineup and layout may differ, however it's an interesting look all the same!

theparklifekid wrote:
A user on the themeparx found an image possibly showing the layout of Super Nintendo World in Orlando!

The image is 100% real, it was the concept art that was originally pitched to Nintendo, however not all of that has made the final cut. The rides that have evidently made the final cut are Mario Kart, Bowser Mine Cart and Yoshi dark ride.
The concept art was posted on Twitter by @thatsjustgary who seems to been given the art directly by Comcast, he's also posted this image which relates to the Mario Kart ride

A new patent has been found which appears to be linked Mario Kart although insiders on IU don't think the guests will be back to back
http://www.bizjournals.com/orlando/news/2017/06/15/latest-universal-patent-hints-more-about-nintendo.html?ana=twt
Everything seems to point to this being an incredible ride, now we just need it to get built!

Everything about the Mario Kart ride sounds mindblowing so I'm trying to think of a way it can be implemented that's realistic.

Cars like the Ratatouille vehicles that are trackless and free roaming yet have Spiderman/Transformers levels of motion for spinning, jolting when hit and simulating high speeds.

Interactivity would have to be limited for the steering, both to stop it being a 'lesser' experience if you're in charge of items, acceleration or defending (which are likely the other 3 roles) and because free steering could break the ride (people could find ways to jam the vehicles). It'll be limited to avoiding obstacles and 'barging' into other karts with the occasional shortcut chance (wouldn't surprise me if this part of the patent is dropped)

I think overtaking would have to be handled automatically. You hit someone with an item or your score overtakes the leader and the cars re-arrange themselves without any steering needed.

I'm incredibly hyped for this ride, it's exactly what the park needs to break away from the over-use of projection screens; given the dynamic nature of the ride, they won't be able to ensure riders are always square with screens so they'll be forced to make significant portions of it physical.
Top

Some of the insiders on Inside Universal were saying that one person will control acceleration and deceleration and the other will control drifting. The consensus seems to be that it won't be free roaming after the issues they've had with Kong.

They are still testing the eruption but it's now sending water a lot higher, I'm not sure about the blue though!

Screamscape reporting that the dueling dragons could be replaced by a powered inverted coaster along the lines of Arthur and the Minimoys and the How to Train Your Dragon ride. Seems a good idea. The Gringotts Bank coaster showed how popular a big budget family coaster can be.

Does leave the park pretty limited in terms of intense coasters though.
Top

To be honest those coasters have been rumoured to be replaced by so many things I will believe it when I see it! Although, the Forbidden Forest area is the biggest rumour currently so  whatever they choose it will be interesting how scary they might go with it...

Just like that, the MACK rumour seems to have been pulled back. Apparently the powered coaster is expected for a 'future development' but not the Forbidden Forest.

The new rumour, one which I LOVE, is that the attraction will be a custom Intamin motor bike coaster. The seats will feature a bike and a side car and look like Hagrid's bike. The attraction is expected to have forwards and backwards  sections, as well as stop for physical set scenes to interact with the ride vehicles.

The best part about this is we could see this announced as early as January 2018!

With Disney's fantastic D23 line up things are really starting to get interesting, but insiders ensure us "this isn't Disney pulling away, it's only Disney pulling up alongside Universal". So ontop of all the D23 stuff we could see Universal deliver...

The 4th Universal Orlando park in 2021


Whilst I am unsure about the final rumour, insiders are generally fairly accurate...

Things are going to get very exciting in Orlando over the next 4 years!

Users browsing this forum: No registered users and 33 guests
×