The HHN27 scarezones have been announced!

This Halloween Horror Nights, we're inviting you to join the celebration of blood and bone at what can only be called The Festival of the Deadliest – an ancient tradition from the depths of where nightmares are born.

A gathering of the most unearthly, hellish terrors has emerged from the darkest corners of despair. It calls to those who long for the thrill of the scare and wish to have their fears made real. You'll be drawn like moths to a flame, and once you join this hallowed celebration, your nightmares will never end.

You'll find the heart of the Festival on the streets of Hollywood in Universal Studios Florida, but its claws have spread throughout Horror Nights. Here's what awaits you every night…

First up, it's time to make sure everyone understands the rules of our haunted holiday. Get a proper Halloween education in our Central Park scare zone inspired by the film Trick 'r Treat. We're excited to have Sam visit and make sure we follow the rules of Halloween.

As a longtime fan of classic horror anthology films, Trick 'r Treat is a favorite of mine that pays perfect homage to that genre. In this zone, you'll have the opportunity to come face-to-face with several characters from the film, and learn for yourself what happens when you don't follow the rules.

Next up, we have a returning story to our New York streets with The Purge. This time, our approach was to create a zone that showed how we think the events of a Purge night might play out in our streets.

There are some fan favorites returning such as our auction and a very polite gentleman. We also have some new surprises in store. For example, how do you clean up all the mayhem on the streets during a Purge night? Visit the clean-crew up crew with their trusty wood chipper to find out. Just don't get too close…

Near the front gate, on Avenue of the Stars, we have our Altars of Horror. For me, this zone is very exciting because we're bringing something to the streets for our horror fans that we have never done before.

In this zone, we're taking some of the larger than life characters featured in this year's houses, and letting them have their own scare zone. A lot of work goes into bringing these iconic film characters to life in our houses. Now you'll have the opportunity to get an even better look at them.

Set in a time decades ago, our docks in San Francisco find themselves the victim of an INVASION! Visitors from far beyond have crashed their vessel, and are now wreaking havoc on the streets of San Francisco.

They aren't just here to destroy; these invaders are also on a mission to learn everything they can about us humans. Careful, or you may find yourself on the experiment table at the mercy of an alien scientist.

Lastly, no Halloween Horror Nights would be complete without roaming hordes. This time, it's the smell of the greasepaint, the roar of the chainsaw. Unhappy with how popular culture has made clowns scary, this grotesque gang of gigglers has risen from the grave, determined to show the world that if you want scary clowns, they're going to make sure you get your worst nightmare.

But wait! There's more. The question is, "can you handle more?" I'm happy to share ACADEMY OF VILLAINS: AFTERLIFE will be returning to put on an all-new killer performance. This group of powerhouse artists will make you bear witness to what happens after we leave this life. They're going to give you one mind-blowing and shocking dance performance that will escort you from this world to the great beyond.

As you can see, the streets will be alive with plenty of horror, mayhem, and celebration. The opportunity to bring favorite horror films to life and tell our own unique horror stories makes every day a thrill. My favorite part of the event is walking the streets each night as our scare actors make these terror-filled tales a reality. Every scream I hear puts a huge smile on my face.

Wonderful article on the history of the Dragons.

So, so sad they have now gone.

Amazing read there Chris, thanks for the link, having rode them in their original form, as Dueling, back when they were allowed to, it's that I'm going to miss more than anything else. The ride that's just closed is not the same one I knew and honestly, the article says what everyone's thinking, it was inevitable once the retheme took place and the dueling was lost.

Another childhood memory from Florida bites the dust.

As sad as it is I am glad it's gone. On closing day the attraction was walk on - literally. I had to wait longer for a locker than I did to go on both sides of the coaster. I have some photos to upload once I have arrived in the UK.

Construction had already begun behind the station a few days before the closure so I can see these going pretty soon...

It seems that it is 'Hasta la vista, baby' to Terminator 2 3D at Universal as the Resort have confirmed that the attraction will be closing on Sunday October 8th to make way for 'an all new live action experience based on a high energy Universal Franchise'. The press release was posted by Thrillgeek on Twitter.

I can't say I'm surprised by this announcement, it is perhaps somewhat surprising that the attraction has managed to remain at the Resort this long and it it wasn't for the more recent sequels then this would have gone a while ago. Of course, now the question is what is the 'high energy franchise' that will be replacing it?

Sad to see it go because of the memories but its aged too much now (when I went last year the 3D hadn't been set up properly and got double image the whole time).

It's kinda hard to know what 'high energy' franchise they could go with. How to Train your Dragon? Would be a bit dissapointing that being a show compared to the neat looking inverted coaster based on it elsewhere. Hope they really emphasis the live action stuff whatever they go with Universal doesn't need another 3d attraction.
Top

Apparently the three rumours are currently Bourne, Bond or Pitch Perfect - Pitch Perfect being strongest due to the popularity of the street show and it being a Universal franchise.

Unless they expand the theater size to at least double the capacity I can't see it being Pitch perfect. A show every 25 minutes would destroy the performer's vocal cords and 700 seats is too small for something every 90 minutes.
Top

Insiders are now claiming Pitch Perfect too, I'd imagine the cast of vocalists would be able to rotate. It's also interesting that there is a rumour that this new show will implement Dynamic Attractions motion theatre product, which could see the show having the audience rotated and moved whilst watching the show!

The deconstruction of Dragon Challenge has begun, as shown in this update from Midway Mayhem. 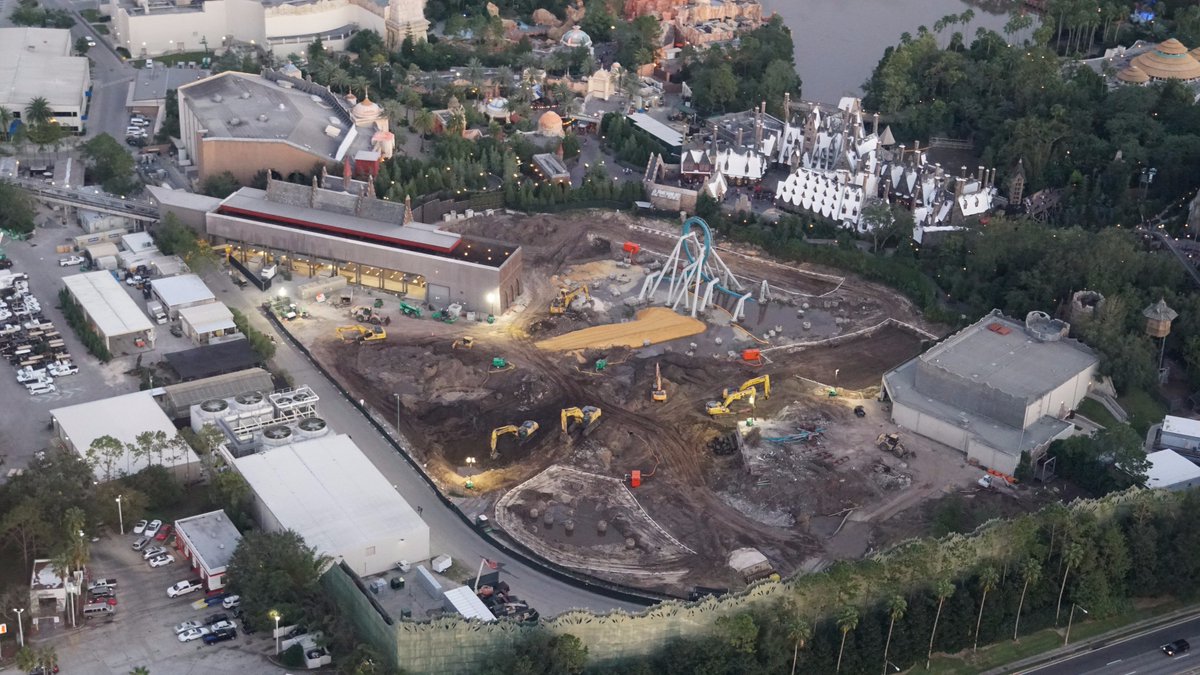 One more loop to go

At least it gives us a good idea of how large the new attraction(s) is going to be.

..and all of a sudden the train station is in a really annoying position!

Wow! They've got quite a bit of space to play with! I can't wait to hear what is happening with it!

While it's very sad to see the rides almost completely gone, it wasn't until seeing that photo that I realised how much space this gives them. Just look at it next to the whole of Hogsmeade! Definitely looking forward to seeing what happens for 2019 now that the initial sadness of the coasters closing is over.

Of course, that doesn't change the fact that the rides could have been saved by relocation, but oh well ...
Burniel | Great at theme park knowledge, not so great at designing signatures.
Top

Is the work by the diggers new groundwork or just removing and filling in the old foundations?

Can't see it being anything other than a family rollercoaster. The question would be what kind. A Powered flying coaster or Hagrid's bike still seem to be the most popular rumours. Hope they get the balance between screens and physical set pieces right this time. The only mistep of the otherwise amazing Gringotts coaster is that it needed a more impressive set piece for the finale (maybe a projection on a real flame would have worked).
Top

Hagrid's Bike makes me think it's gonna be the lovechild of a Vekoma booster Bike and a B&M Wing. Currently it’s looking like a launch coaster may be on the cards, themed to the Ford Anglia or Hagrids bike!

The experience is rumoured to feature Hagrid heavily as well as large AA’s, immersive scenes and outdoor sections!

Well that's certainly a sad sight, although onwards and upwards and let's hope we get another high quality ride. I have faith in Universal, and if the rumours are anything to go by, it sounds exciting

It seems that Universal Orlando have just made a purchase of a piece of land, 101 acres to be exact, near the resort for the cost of £21 million. The new purchased land is apparently bigger in size than the current size of Univresal Orlando entirely. It'll be interesting to hear what may be happening with this new development opportunity in the future.

Robert.W wrote:
It seems that Universal Orlando have just made a purchase of a piece of land, 101 acres to be exact, near the resort for the cost of £21 million. This is apparently bigger than the current size of Univresal Orlando entirely.

It’s the same size as Islands of Adventure

Currently the entire resort sits on approximately 541 acres, and with the previous 540 purchase the addition of this 101 means that the Resort has essentially doubled in size in terms of owned land.