Nice gesture but it's one that risks being misinterpreted.

Rather than the "just in case you're worried..." message they intend, a lot of people will take it as "you're in so much danger we have to give you this!". Fuels hysteria.

Still, all the Zika stuff means there's a good chance of cut prices holidays and as I'm not planning on having kids in the foreseeable future it's not really something that worries me.
Top

Star Wars Land has had more details revealed, with many bring about the second attraction guests will be able to experience - Stormtrooper Escape.

This will be a first for Disney as it will be a multi layered experience. Guests will experience part of the ride but then get off and explore a physical scene. Riders then board the ride vehicle once more and finish on a 'huge finale'. There was also mention of VR technology being used in one attraction at the Land in a Merlin presentation - however this cannot be confirmed for obvious reasons.

I think many of you will now understand why it's only a first for Disney as a company have done this already - a little closer to home too!

With the Great Movie Ride is due to close next year, there's going to be a significant period where the park is going to feel a bit lacking in things to do.

Wonder if they'll add more Star Wars shows to make up for it. Would be a great chance for them to properly revamp Fantasmic, outside of adding a few more modern villains to the water projection scenes, it hadn't changed since I last went over 15 years go. Too much reliance on water projection and not enough live action scenes (choice of Pocahontas as the only movie to feature seems increasingly weird as time goes on)
Top

I've got to admit I am a bit concerned about this for two reasons. Firstly, surely it's a bit early to say a solid opening year when vertical construction is yet to start, especially one that's just over (I'd expect a winter opening) 2 years away. As well as the fact that this land looks as though it has more to build than Avatar (albeit far less complex) and they seem to think it'll take almost the same time

Either Star Wars land isn't as indepth as it seems or Disney have finally gotten into gear as I don't know if another delay will be appreciated. That being said I'd personally hold off planning any trips specifically for this based on insiders still claiming this is more likely for mid-2020 and just in case we do end up seeing it taking a bit longer much like New Fantastyland.

Looks like a fair amount of the first half of Slinky Dog Dash has now been installed. 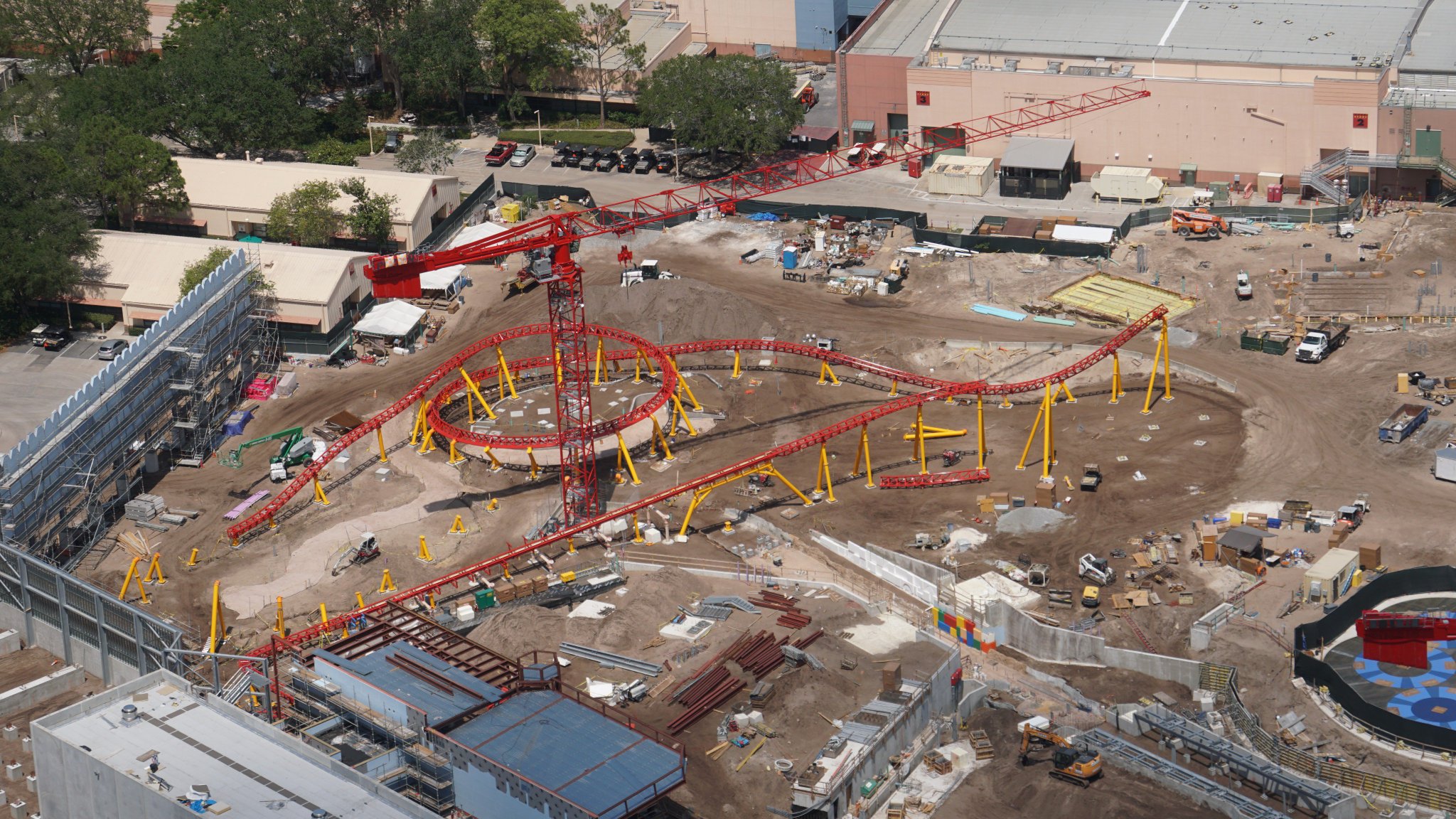 I wonder what the blue circles to the right hand side of the picture are?

Robert W wrote:
I wonder what the blue circles to the right hand side of the picture are?

That's the base for the 'Alien Swirling Saucers' attraction.

Robert W wrote:
I wonder what the blue circles to the right hand side of the picture are?

That's the base for the 'Alien Swirling Saucers' attraction.

I did suspect it was "that" ride but couldn't think of what it was of the top of my head! I've only see no few of the concept art fit this land.

Here is a photo update from Attractions Magazine! Some great views of the Alien Spinning Saucers ride. Ariel view of the whole land! Apparantly this is the launch segment! Lots of progress made on the framework of one of the buildings!

The first of the D23 announcements have now been shown off, in the form of a Star Wars Labd model...

(The following images are from Attractions Magazine)

You will step aboard the Millenium Falcon and pilot it through space. Think Mission: SPACE but with screens surrounding you and a more 'simulator' style movements.

This appears to be a trackless dark ride which pits you in the middle of a battle between the dark and light!

There is also a street markets and canteens!


I really hope this is done well, as it'd be amazing to have two of my favourite franchises have their own fantastic lands within 20 minutes of each other!

It's certainly an ambitious project! That model is incredibly detailed. I do however have some reservations on how it will feel to walk around though... it's rather "rusty" and industrial looking in some areas and the amount of trees in other areas isn't going to convince people of being in a "galaxy far far away"... if I'm honest, I wasn't quite sure what I was expecting though!

The name of Star Wars Land has been leaked! It has had a lukewarm response however I'm sure it'll grow on people...

Star Wars: Galaxy's Edge will open at Disneyland California in early 2019 and Hollywood Studios in mid to late 2019!

Mickey & Minnie's Runaway Railway confirmed as the replacement for the Great Movie Ride. Going to be styled around the current Mickey Mouse shorts and will use some neat (probably projector based) technology to make the world around you look like a cartoon, but in a real 3D world.
Top

The first ever attraction built about the mouse himself will have an original story and soundtrack just like Pirates of the Caribbean. This attraction will take you through the screen into a Mickey Mouse cartoon short, expect the unexpected with surprising twists and turns and stunning Visual effects. The ride begins with a cartoon short where you will see Goofy pull up in a train, then suddenly you will be able step into the screen and into the train. The ride will not require 3D glasses and will be '2 1/2 D' by inventing new technology! On top of this, the ride will feature the most hidden Mickey's anywhere in the world!
This attraction will replace the Great Movie Ride, which will close it’s doors on August 13th.

In summer 2018 you will be shrunk down to the size of a toy to explore Andy’s back garden. The new land will feature Slinky Dog Dash, a high-speed family coaster where you will travel along a track Andy has laid out to test Slinkey Dog to his limits. The other attraction is the Alien Swirling Saucers attraction. Inspired by the first film, you will find yourself trying to be caught by the aliens with the claw!

Star Wars: Galaxy’s Edge will see you venture to a remote trading port at the edge of the galaxy. Here, you will find many familiar faces including BB-8, Chewbacca and even Rex – the pilot from Star Tours. You may also find many new faces, including in the cantina where you can get a drink with new faces from around the galaxy. You will alsoo be able to visit a marketplace selling all kinds of items from a galaxy far far away…
The land will feature two attractions.

Battle Escape
This attraction is the largest that Disney have created, the scale is fantastic. You will feel like you are in a Star Destroyer inside a hanger bay whilst a battle between the Resistance and the First Order ensues around you.

Millennium Falcon
This attraction will see you and you team pilot the iconic Millennium Falcon. You may be piloting the ship, shooting blasters or preparing for hyperspace all whilst being on a highly important mission. Be sure to do well and you may be rewarded with ‘galactic credits’, do badly though and you may find yourself on the list of a bounty hunter. The way you fly the ship will directly influence your experience in the land!

The Star Wars adventure doesn’t end outside of Star Wars: Galaxy’s Edge though. A brand new fully immersive Star Wars themed hotel is also being built and it truly takes vacationing to the next level. The moment you step into this hotel you will be immersed in a whole new story, you’ll even be able to dress the part. Characters and fully themed spaced will truly make this an out of this world experience. Why not look out the window, because every single window within this hotel will show you outer space. This is truly a breath-taking hotel.

The trains for Slinky Dog Dash have been delivered to Hollywood Studios today. I have to say that on first look they look pretty good and I'm looking forward to seeing how they look on the ride itself. 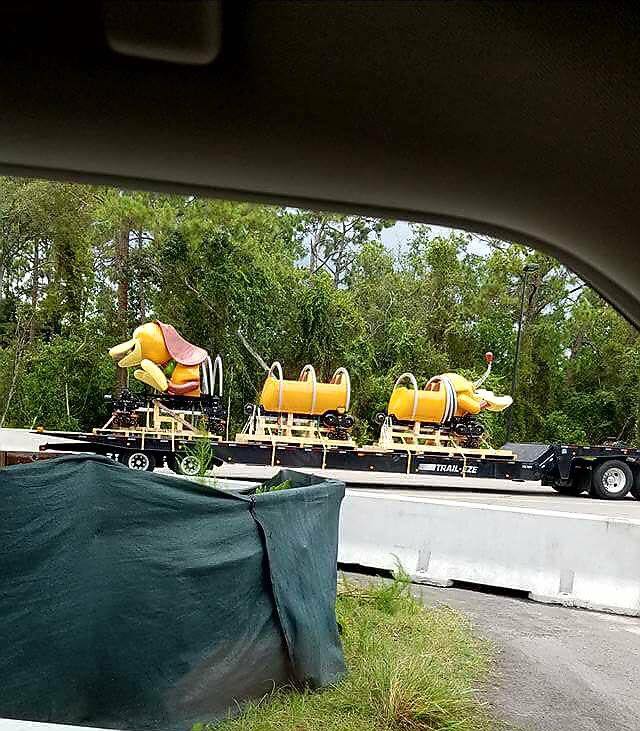 Credit to @Eftelflags on Twitter and Ziggy Knows Disney
Save
Save

Wow! They look great! A little shorter than I imagined.. perhaps there will be more carriages in between.

Robert W wrote:
Wow! They look great! A little shorter than I imagined.. perhaps there will be more carriages in between.

They should definitely be longer (shown by the concept art). It is most likely a promotional video is taking place, which would explain why nothing was covering the train.
Top