Maybe this project will turn out to be great if people remember that they are building a family coaster. I gathered from the plans and the early marketing, they were aiming for an aggressive thrill ride; obviously I am wrong so that's why I'm a little bit disappointed now.

Zierer seem to be very excited about the project, and didn't really want to talk too much about it at IAPPA this year. The enclosed building looks exciting, but at present, I am left less than inspired with the outdoor section. We will see how everything pans out...

Nightfall wrote:
I have to say I'm also disappointed. Not by the ride, I just believe that drop had more potential. What they've done is built the supports of a sit down coaster on top of those of a suspended coaster. As results the footers now look huge and the drop is no longer as far out over the river due to the way the suspended carts leaned away from the supports. As I said originally I think a B&M flyer would have been a much more impressive replacement and really would have made use of that drops location.

Nightfall wrote:
I have to say I'm also disappointed. Not by the ride, I just believe that drop had more potential. What they've done is built the supports of a sit down coaster on top of those of a suspended coaster. As results the footers now look huge and the drop is no longer as far out over the river due to the way the suspended carts leaned away from the supports. As I said originally I think a B&M flyer would have been a much more impressive replacement and really would have made use of that drops location.

I never said the B&M flyer should be this project. I'm not disappointed that this is a family ride. Some of my favourite ride types are family rides and Verbolten is shaping up to be one of them.

The point I was making is that I don't think they should have used that drop for this ride. I'm all for the re-use of the BBW's footers but as they were designed for a suspended coaster. I feel a suspended/inverted/flying replacement would have put them to better use. This could have meant the site remained unused until this next project came along.

As it is they have huge footers with a small track running across it which lacks the grandeur of the sites former attraction. While overall it makes Verbolten a better ride it has stopped them from building something which I feel would have worked better on this site.

Once again I am back to defend this coaster

Okay, so, I will go about 4 weeks back to start off. BGW Fans did a picture update of the construction, and upon seeing the photo below, I will admit I was slightly concerned!

The image shows the track starting to work its way up towards the drop over the river, and if you look in the far background you can just see a support in place for the accent towards the bridge. Now to me at the time this support didn't look anywhere near tall enough to be able to give enough height on the bridge to produce a decent drop, which really did worry me quite a lot!

However a few weeks later this picture emerged; 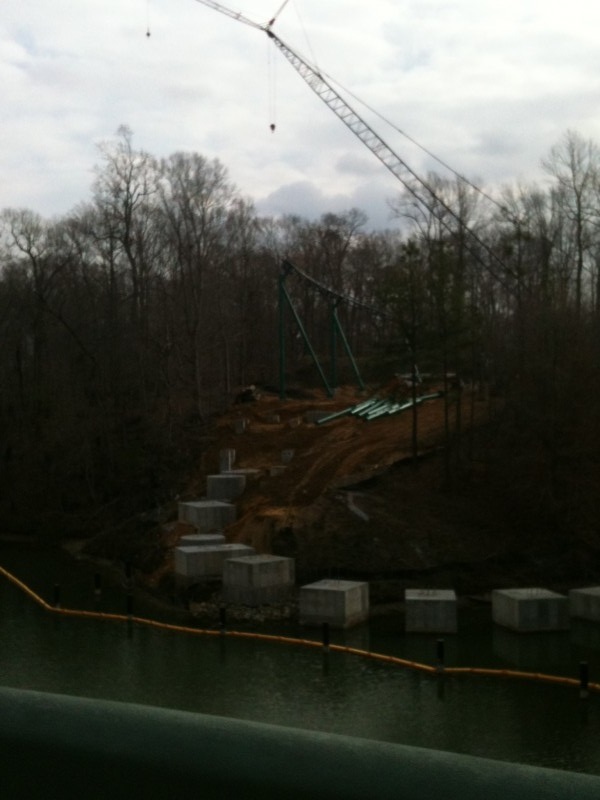 Which filled me with hope, the angle of the track onto the bridge feature was a lot steeper than I was expecting, thus making the drop a fair bit taller than first imagined!

So now we have the pictures of the completed drop, which many seem to have a problem with;

Also, I think it does depend which angle you view it from as I personally think that it looks rather imposing in the picture below.

And not forgetting the track after the drop remains very low for a while with a few good twists in it, which should give some good speed! But as with any coaster, it is best to reserve judgement until it it ridden, or at least until we see some movement on it to get an idea of the speed. So just be patient people!

I think it speaks volumes about interest in this ride when there is more discussion on ttf than for the new B&Ms at PortAventura and Asterix. It is highly anticipated whether people like it or not.

I look forward to this but am not massively fussed by it, either. I would have rather gone on Big Bad Wolf!

Not reeeeally that massive an achievement is it, it's like comparing pizza to piles!
Top

I think that the coaster is shaping up to be a great family attraction. The ride-type is clearly popular and has provided something that was needed in the family-thrill market. The success of Th13teen (yes, I said success) combined with the two up and coming drop coasters could see this ride type growing for years to come.

It's such a shame that once again, Alton had to be the prototype builder for a rise type that has so much promise and available expansion (such as the launches that will be on this ride).

I think one of the reasons Big Bad Wolf's drop looks good because of the trees around it, hopefully some trees will grow around Verbolten and the drop will look better

To be honest though, 50mph for a family coaster does seem rather on the high side, might be just me, but then again there is Test Track! Anyway looking forward to the finished product.
Top

Well it's been a long time since an update, but I now have one for you all.

First of all a video can be seen here.

Then there have been some construction pictures released by the park, a selection of which I shall post here:

Overview of the event building area

Final piece of track being put in place

More photos can be seen here.

That last one looks just like Th13teen's first drop!

I have to say, it looks like it'll be a lovely family ride.

I like the way BGW seem quite proud of it.
Top

Looks good. I must say though that once it's all finished it'll be fun to trawl through construction pictures and find all the Th13teen references. Nearly every new piece of information has had at least one link to th13teens construction, now including the drop picture

Are all of the launches on this coaster rolling launches similar to Cheetah Hunt? Looks like a pretty good family coaster in every way, the complete family experience that Th13teen missed. And those rolling launches are ideal for a family coaster, a nice sense of speed without excessive force. Thrill coasters should stay well clear of them in my opinion though, Cheetah Hunt was a total yawnfest! A fantastic looking coaster but it felt more like a steady amble across the park than a world class thrill ride.
Top

A fairly accurate recreation I made to give a feel what the ride will be like. Also includes some of my first ever Custom Scenery Items.

Not sure if this has been mentioned already, but I found a promo video for the ride:

It's quite cool, and really funny as well!

Some new Verbolten pictures from BGWFans.com.

More can be seen here.

Looks fantastic so far in my opinion, the theming is top class and it's not even finished yet!

I was going to post the other day. Really is looking brilliant!

Sounds like there was a very bad accident involving Verbolten.

That sounds pretty bad. And besides the injured truck driver (thrown from a truck

!?), there's also a damaged support and the yellow train has apparently been obliterated. How on earth did that all happen?

I hope the truck driver is okay, that's just terrible!