DPR have released statements on how well the parks have been performing from its opening to the end of 2016. The resorts budget was $2.7 billion (9.9 billion AED), so if it made 74.5 million AED ($20,283,147), considering they make the same amount all the time, they only need to do it another 133.11 more times until they break-even! Which, if you do the maths will take them 22 years!

Hopefully they will get more visitors in the future though and considering that there were moments where not every park was open, its guaranteed this will change.

They have also released an opening schedule for the remaining attractions at the parks, I find it a bit mean how they have completed 2 attractions in the How to Train Your Dragon area yet are refusing to open it until April!

theparklifekid wrote:
DPR have released statements on how well the parks have been performing from its opening to the end of 2016. The resorts budget was $2.7 billion (9.9 billion AED), so if it made 74.5 million AED ($20,283,147), considering they make the same amount all the time, they only need to do it another 133.11 more times until they break-even! Which, if you do the maths will take them 22 years!

Unfortunately that's revenue not profit so they've not actually recouped any of the cost of the resort as they made a loss during the period!

But they really need to get the remaining rides open as the customer satisfaction can't be that great considering the entry pricing. You can literally do all three parks in a day still, and there are maybe 3 or 4 rides for teenagers in the whole resort.

At least the rapids is now open! 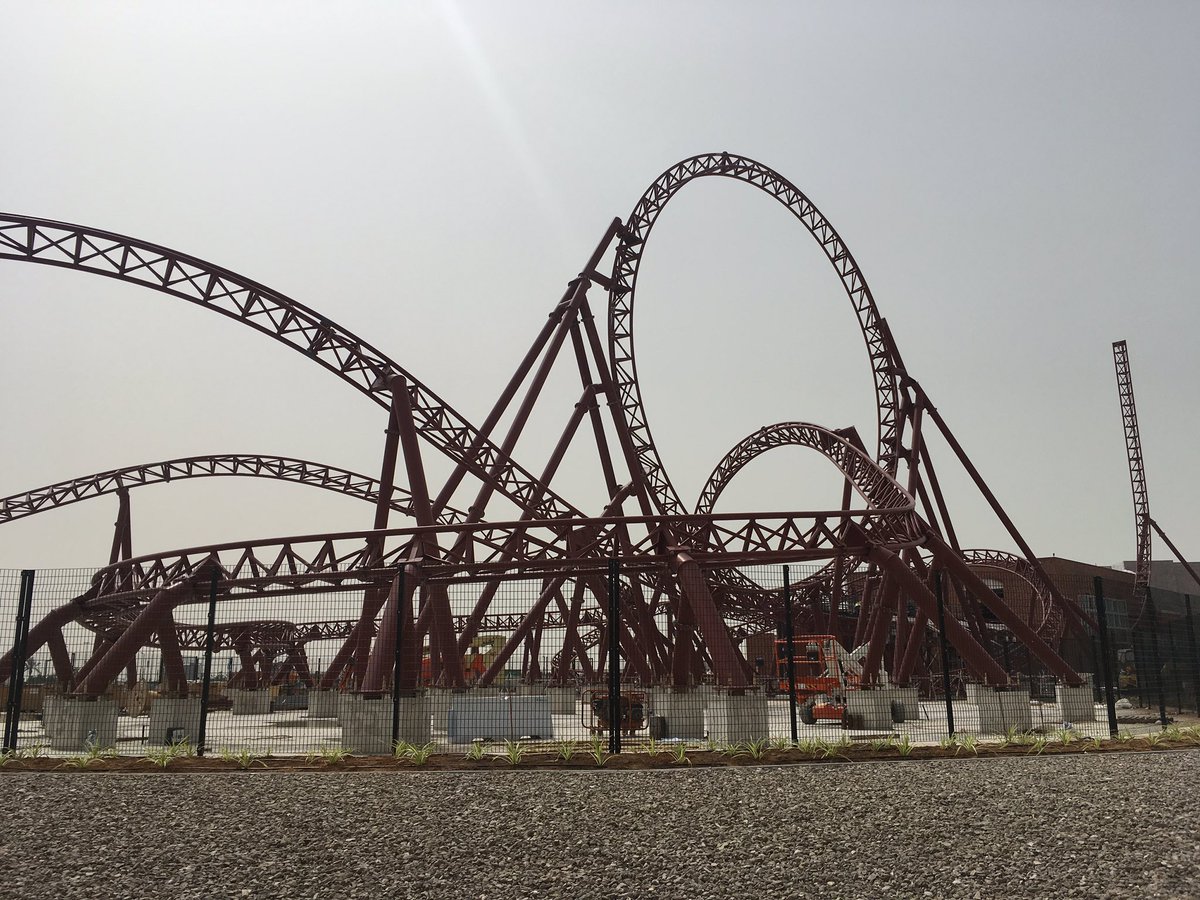 View of the ride 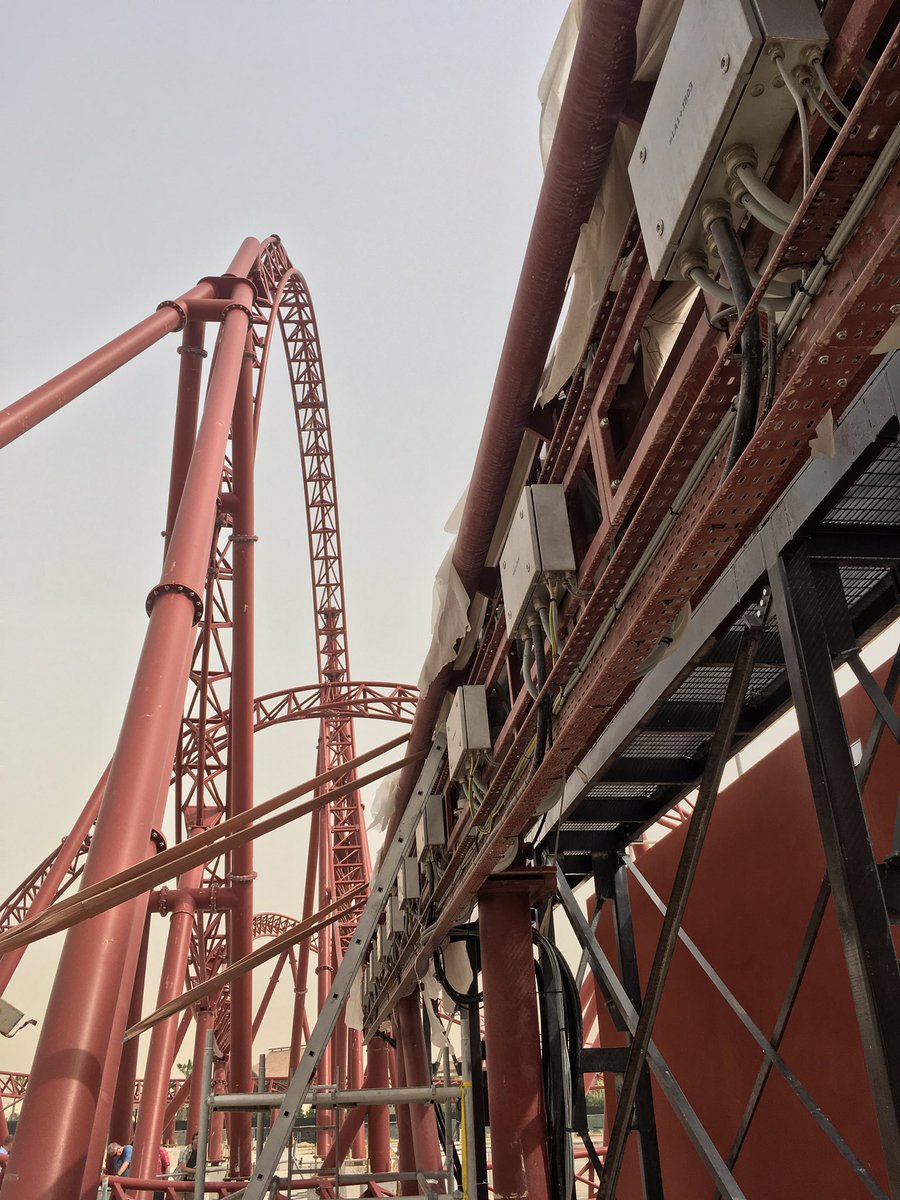 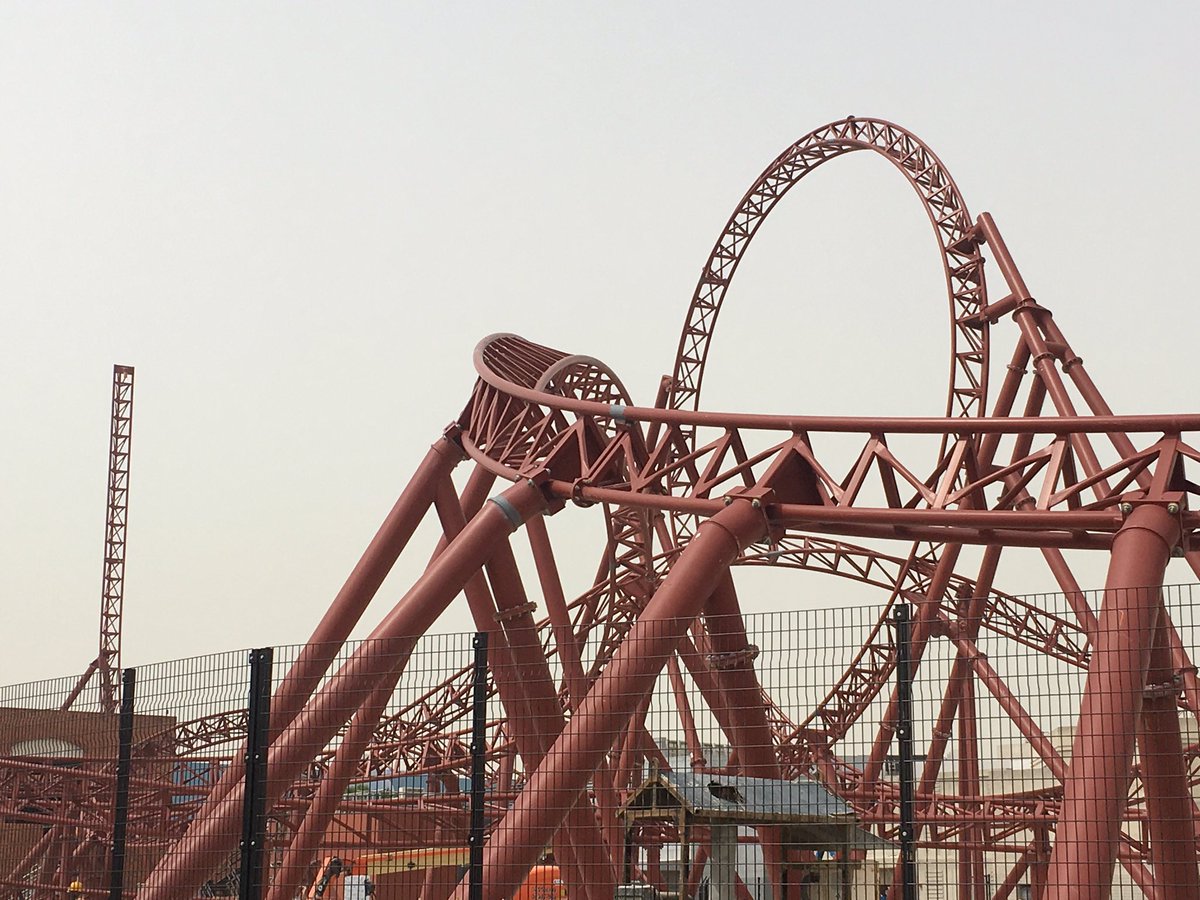 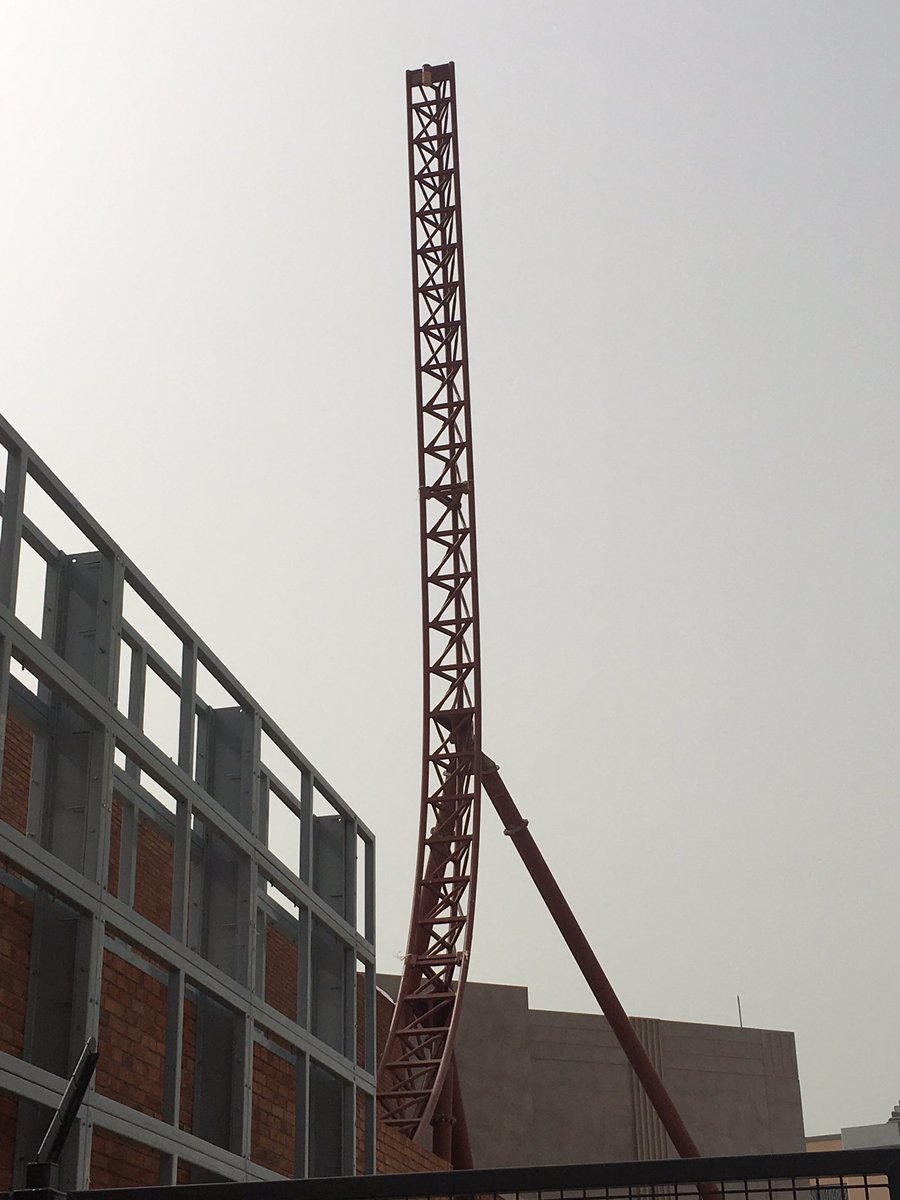 Quick update on the Lionsgate/Hunger Games area of MotionGate, from my last trip to the park. 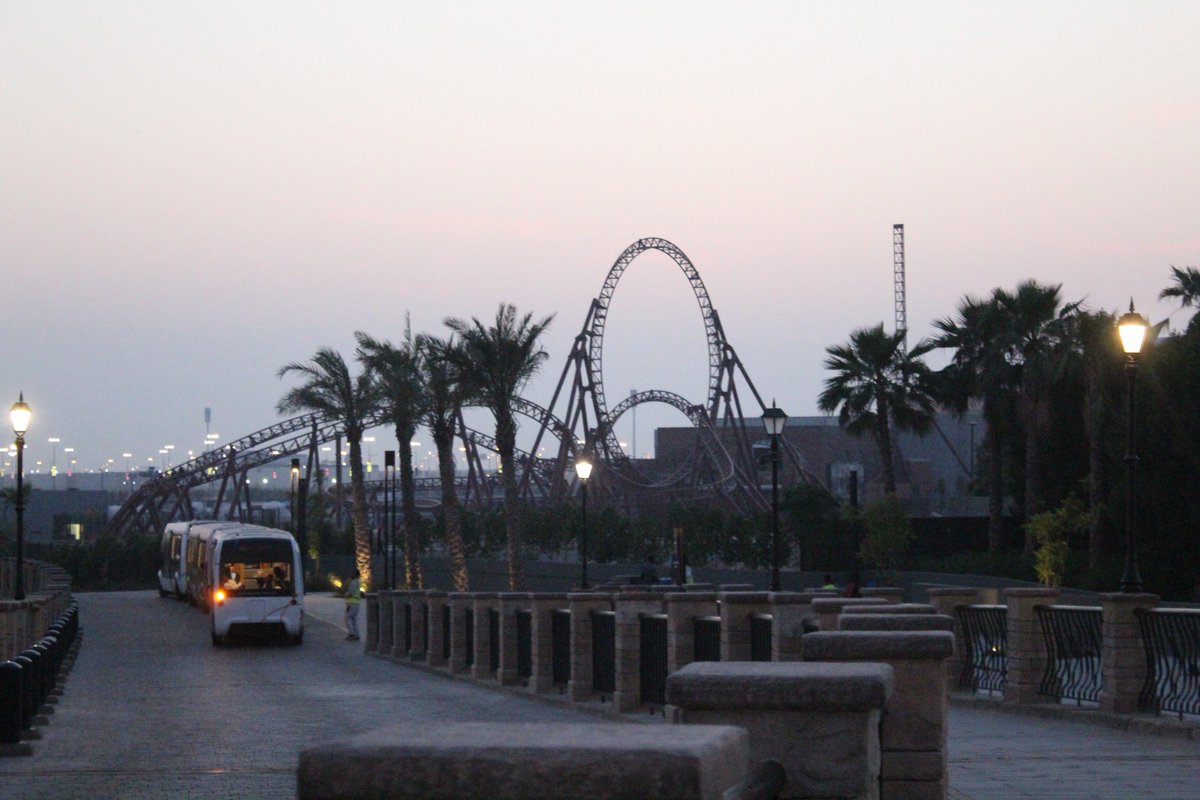 This is a good view of the coaster from outside the park. 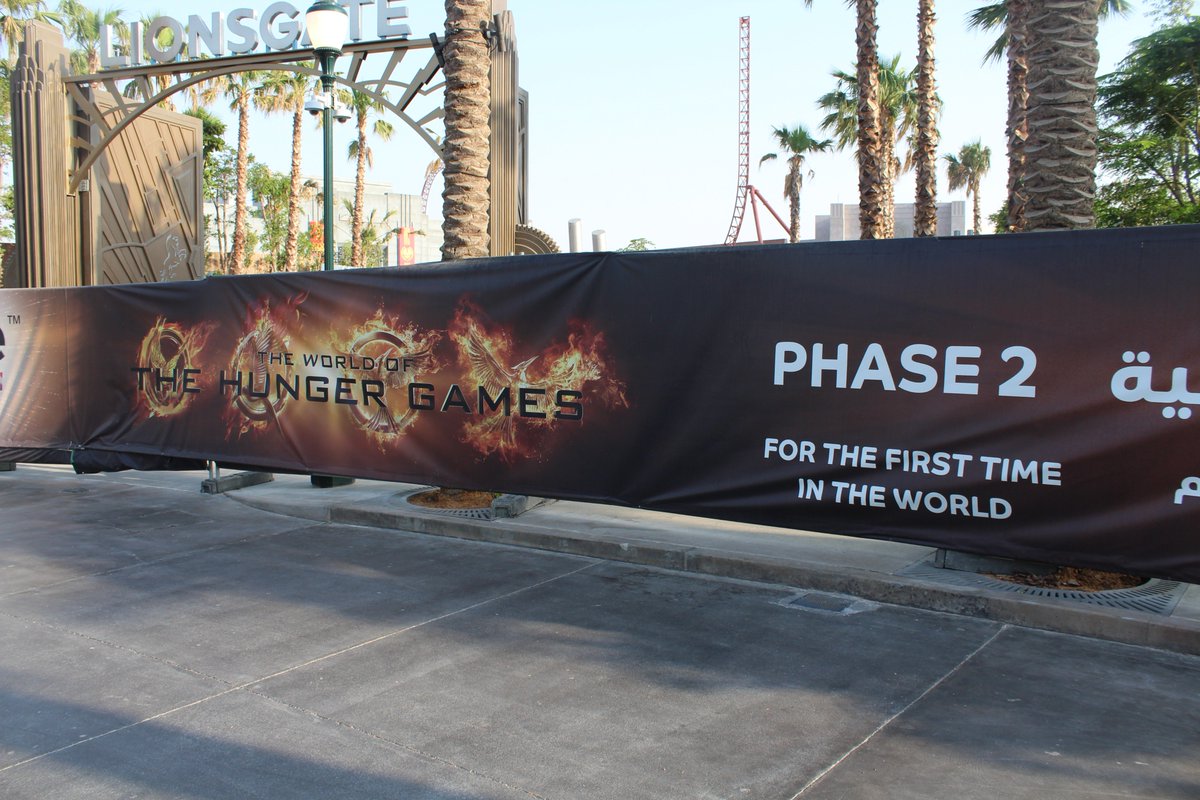 On the inside of the park, this banner is now blocking the entrance to Lionsgate. 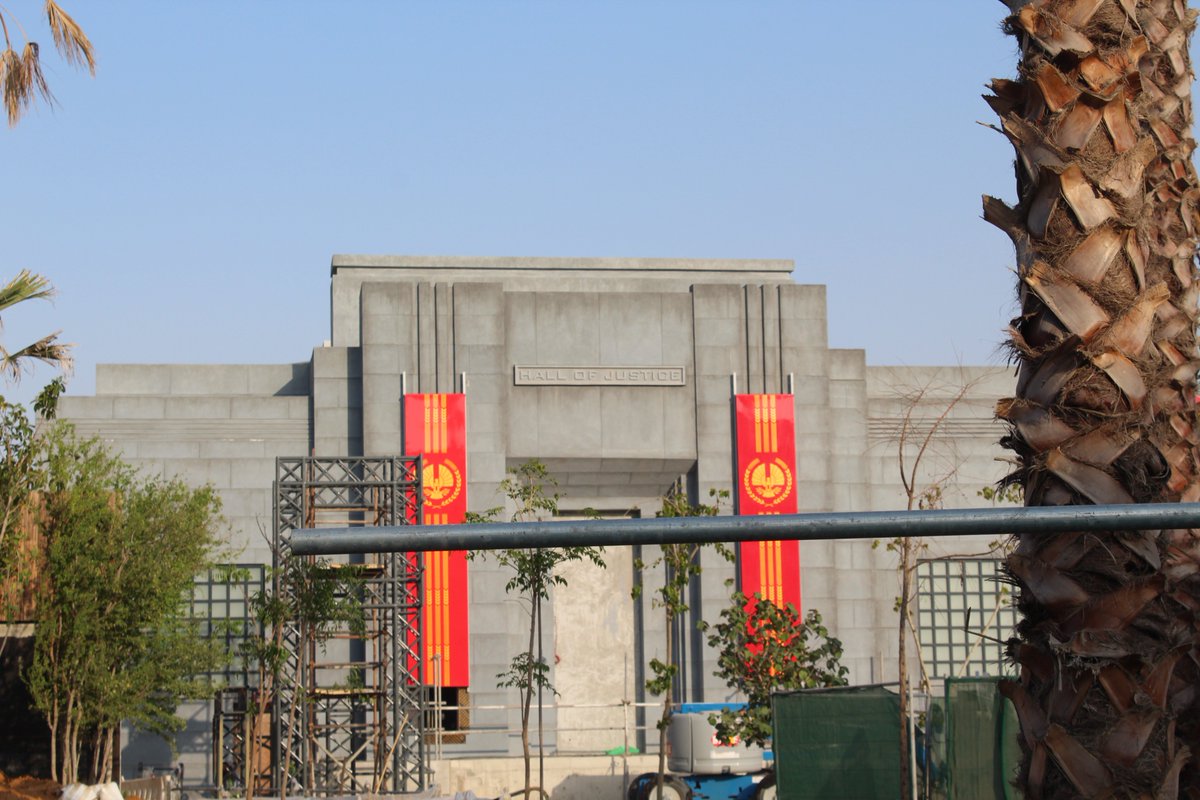 However, if you watch Step-Up, you exit to a path with a better view of the area. This building will be where the Panem Arial Tour ride is going. 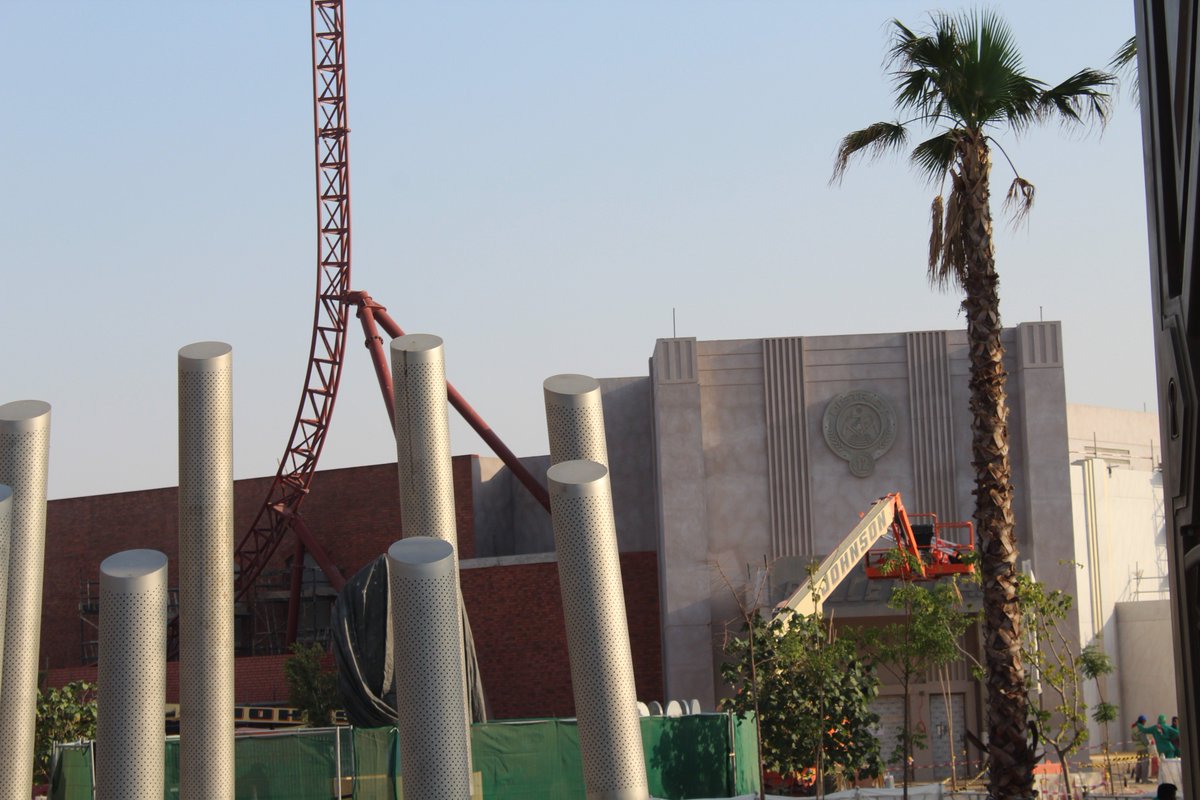 Maybe this is will be the entrance to the Capitol Bullet Train coaster. Also I believe that those steel beams will hold a massive Mockingjay Pin.

Coming together very nicely and should be ready very soon!

Thanks for the update. Not long now.

Loving the look of the air conditioned trams by the way - much better than the temporary coaches!

A few snaps I took the other day. 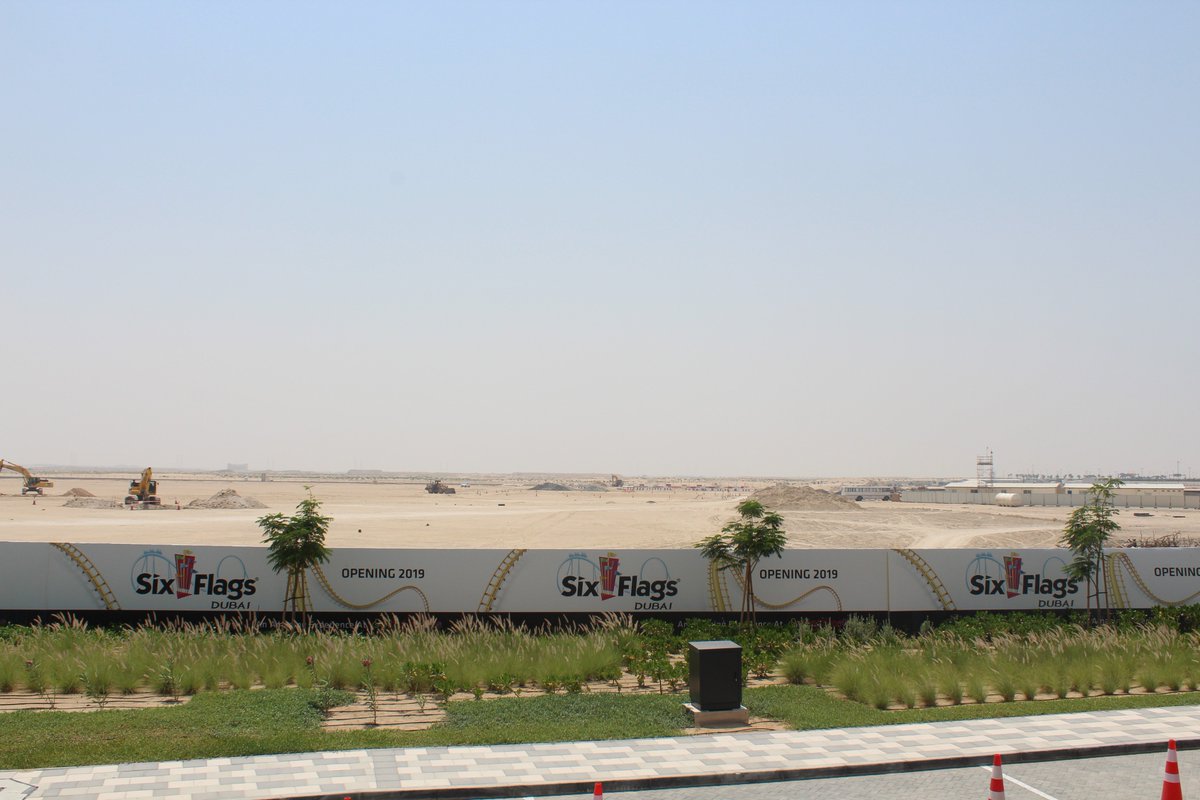 Various diggers doing some digging near the Pulsar clone area. 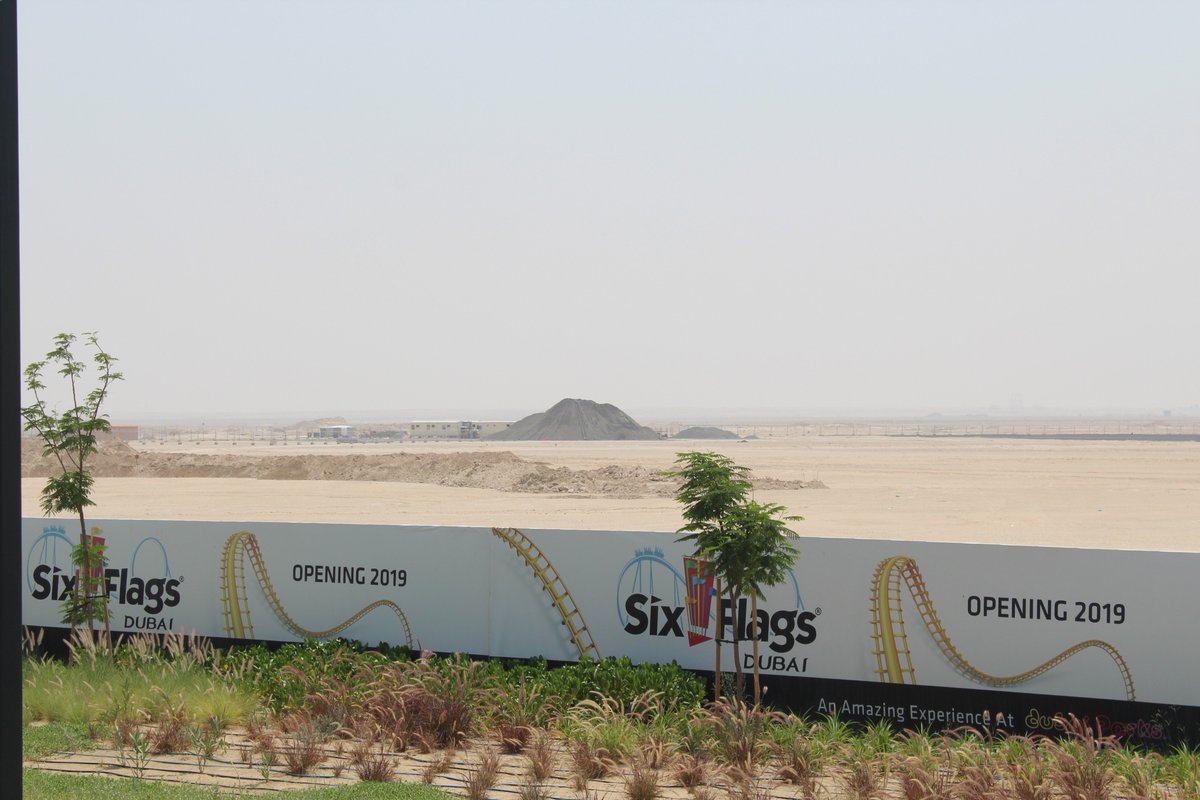 Big pile of granite in the distance. 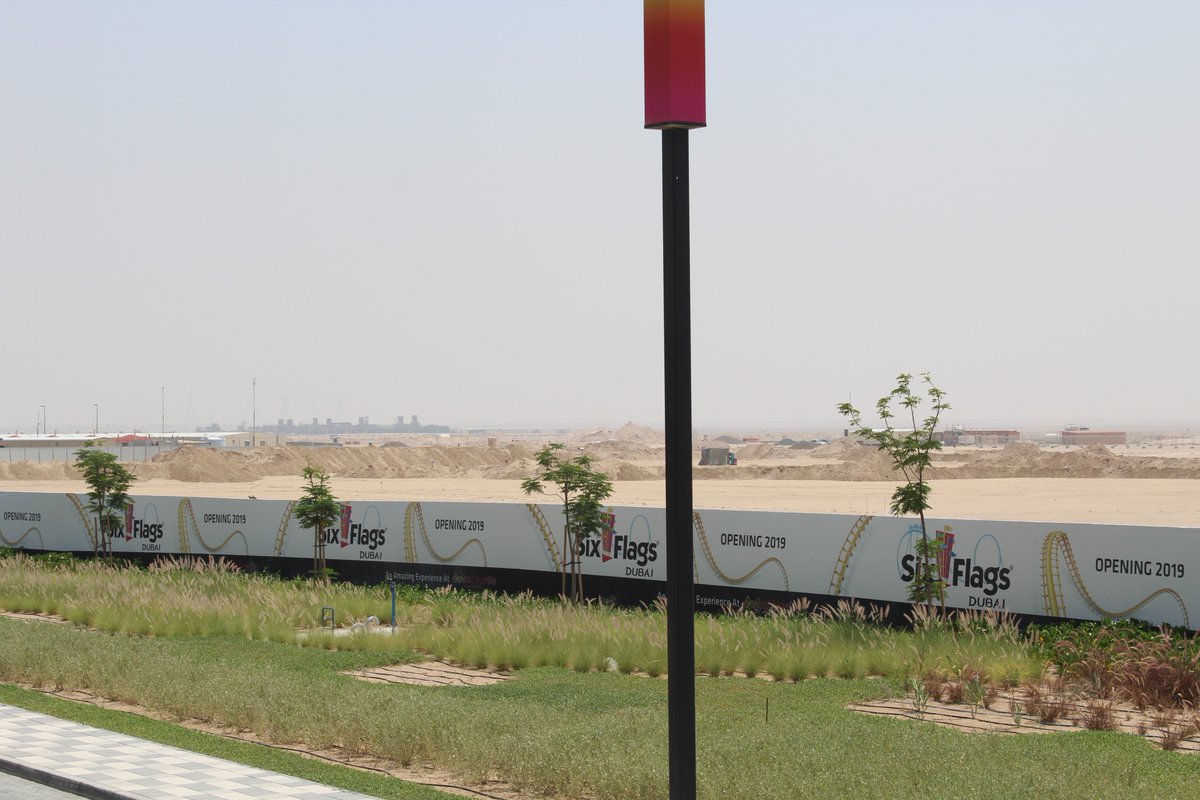 The shape of the entrance plaza is being dug out.

Exciting! Will certainly be the most interesting park out of the four to watch go up. 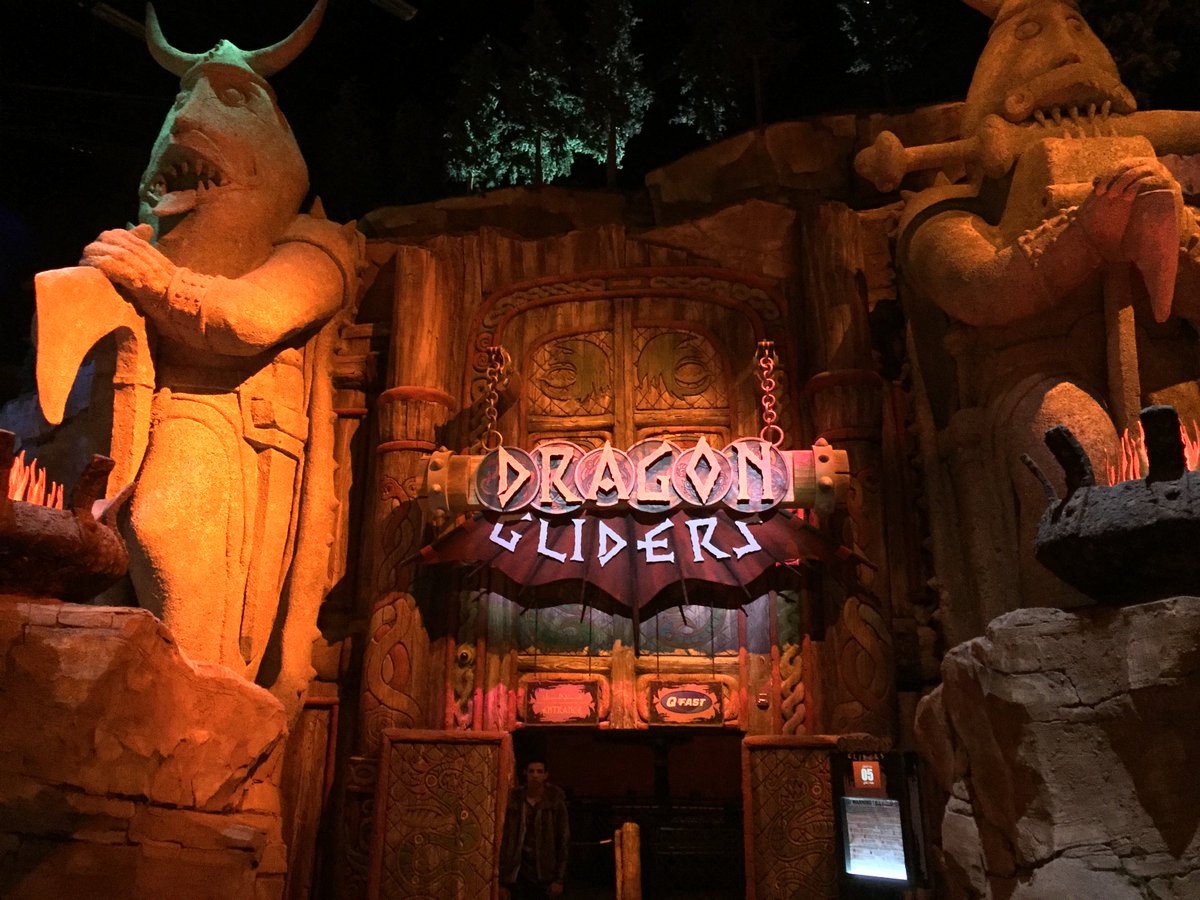 Dragon Gliders has opened along with the How to Train Your Dragon section of MotionGate. The Shrek dark ride has also opened as well. Meanwhile in the Bollywood Park, 'Don: The Chase' had also opened. This means that all of 'Phase 1' of DPR has nearly been completed, just Hunger Games to go!

https://www.youtube.com/watch?v=FQgaf5Sigo4&t=0s
MotionGate have also released this video on Dragon Gliders.

A friend of mine went on the ride and he said it was a 'game changer' and one of the best rides in DPR! Not sure when I can make it down to the park, but hopefully soon!

Good to hear. Arthur at Europa is superb so hopefully this will be too.

Construction on the Six Flags theme park is progressing per plan and it is expected that DXB Entertainment will start drawing down on the available finance facility for the project towards the end of this year. At the end of the quarter seven ride agreements had been signed, and close to 90 per cent of the design works completed.

There is currently a rumour going around that Universal Studios is in talks with Meraas, (developers and owners of DPR) to return to Dubai, in DPR.
This is suggesting one of 2 possible things.

1. Universal Studios Dubai will open up as the 5th gate in Dubai Parks and Resorts (which I find unlikely considering Motiongate is the movie park of DPR)

2. Universal Studios will be part of an expansion for Motiongate, having its own dedicated section of the park (slightly more likely).

I guess time will tell, however this is a rumour so just take this with a pinch of salt.

The POVs for the final rides in phase one of Motiongate have been released! I haven't actually watched them because I want to save the surprise for when I next visit, as I've heard it looks really good! What do you think?

The Hunger Games/Lionsgate area of MotionGate is finally due to open soon, most likely at the end of this month. This area home to 2 rides including a Mack launch coaster, and means that Phase 1 of Dubai Parks and Resorts will finally be completed.

Clearly they have delayed the opening so they can advertise it as a new for 2017 attraction already.

Someone has managed to get a video of the Capital Bullet Train coaster testing, not much on the 'bullet' aspect of the name as you can see, however that hangtime on the loop looks good and it looks like a nice fun ride!

Evening guys, I am off to Dubai in January and not knowing much about the parks I am after some opinions on what park/parks to visit, Its just me and my partner both mid 20s who tend to enjoy the thrill and dark rides.
Top

Ibizarocks16 wrote:
Evening guys, I am off to Dubai in January and not knowing much about the parks I am after some opinions on what park/parks to visit, Its just me and my partner both mid 20s who tend to enjoy the thrill and dark rides.

Ohhh just the question for me! I'll go through the main parks in Dubai and Abu Dhabi

MotionGate Dubai
This park is the so called 'Flagship' park in Dubai Parks and Resorts, its home to 5 rollercoasters. 'Madagascar: Mad Pursuit!' is a Infinity coaster (like Smiler) and is the parks fastest ride, its indoor and a lot of fun. 'Green Hornet: High Speed Pursuit' is a family wild mouse style coaster.  'Smurfs Village Express' is a cute and quite fast family coaster. 'Dragon Gliders' is a family suspended coaster with (from what i'm told) fantastic special effects and lots of cool moments. 'Capitol Bullet Train' is the latest coaster about to open, its a multi launched half pipe coaster with a few inversions.
In terms of thrill and dark rides, you have 'Zombieland: Blast-Off' a shot and drop tower, 'Unstoppable Awesomeness' a 3D simulator, 'Panem Arial Tour' a 4D flight simulator, 'River Expedition' a river rapids, 'Hotel Transylvania' a trackless dark ride, 'Shrek's Merry Fairy Tail' and 'Smurf's Studio Tour are dark rides and 'Ghostbusters' an interactive dark ride.
I'd say that this is a must visit park.

Legoland Dubai
A park in Dubai Parks and Resorts, this park hasn't much to offer, sure the lego models are cool, but it only has one good ride and thats 'The Dragon'.

Bollywood Park Dubai
This small little park has great theming and a lot of charm, no rollercoasters however, but it does have cool dance shows and a great flying theatre ride 'Krrish: Hero's Flight', this park does have tickets which are a bargin so its worth it.

IMG Worlds of Adventure
The worlds largest indoor theme park is IMG, the park is located just outside central Dubai, it has a 3 coasters, a Blue Fire clone, a Euro-fighter and a spiderman spinning coaster all of which are awesome, thrill rides include a thor top spin and an air race. Dark rides include 'Avengers: Battle of Ultron' which is one of the best dark rides i've ever done, 'Forbidden Territory' a ride quite like dinosaur and an interactive ride called 'The Amazing Ride of Gumball'.  Highly recommend this park.

Ferrari World Abu Dhabi
This park is part of Yas Island, which is an hour away from Dubai but is well worth the drive, its a must do for car fans and thrill seekers. Its signature ride is 'Formula Rossa' the worlds fastest rollercoaster and has an incredible 149mph launch. 'Flying Aces' is the other big ride at the park, its a winged hyper like Skyrush (but it inverts) and as of currently, is my all time favourite coaster, its incredible. You also have 'Turbo Track' a fun shuttle coaster and 'Fioranno GT Challenge' a duelling family launch coaster'. As of dark rides there are a few, my fav is 'Speed of Magic' a 3D dark ride.

Yas Waterworld
Just thought I should add this as this waterpark is home to 'Bandit Bomber' a cool family suspended coaster and a great selection of waterslides.

Even though Six Flags is well under construction, due to stuff going on behind the scenes at DPR, its rumored that Six Flags Dubai will have an early 2020 opening.

It's hard to tell from the photo - but is there clear signs of ongoing construction? Seems like there isn't much difference compared to your January photo.

Users browsing this forum: No registered users and 94 guests
×