By the looks of things F1-X Dubailand has restarted construction!

On my way back from school the other day I saw the cranes, but diddn't know It was on this site, but hey looks like we may have Dubailand 2.0 coming up very soon!

Created its own topic as it is a different attraction and company to DP&R.

Hopefully F1-X Dubailand will contain some alternative attractions that Ferrari World does not. We all know how long it took for that to establish itself..

The waters around the iconic Burj Al Arab look set to be transformed by a huge new Dhs6.3 billion project. The 'Marsa Al Arab' project is will be developed by Dubai Holding (responsable for Dubailand) and managed by Jumeirah and will include 2 new man-made islands and a massive expansion to Wild Wadi and a marine park

Wild Wadi Waterpark will be relocated closer to the beach. The new location will more than double Wild Wadi’s size, adding new rides and record breaking attractions, according to the statement.

The ara will also house 'Marine Park', a marine life educational and entertainment centre. With a 1,000 seat theatre, the park will feature shows that showcase various elements of marine life, allowing its visitors to interact with exotic aquatic animals and fish.

Together, the enhanced Wild Wadi and Marine Park will cover an area of 2.5 million square feet. The new family destination will house a dedicated theatre with a capacity of 1,700 seats, which will become home to Cirque du Soleil, a professional theatre troupe.

The project will break ground in June 2017 and will completed by late 2020. Its also going to be located literally 5 minutes away from where I live, so expect lots of updates!

Location of the new islands.

Concept model for the Wild Wadi expansion. (Do I see a coaster in their?

View of the expansion from behind. Also the venues for the marine parks are shown here.

Here's a video going into the expansion

Sad news coming from Sega Republic, the indoor park located inside the Dubai Mall. The park home to a unique set of flat rides and a Gerstlauer Spinning Coaster 'Spin Gear', had closed its doors to the public, not sure just yet if it's closing permanently or having a rebrand, hopefully it will reopen soon. New and updated models of F1-X!

Don't know how this managed to get past me, but it appears that the seasonal Epcot style park 'Global Village' (where ATs old Beastie has been spotted) has put together a Vekoma Junior Boomerang (same model as Paultons Velociraptor):

Today I drove past the Dubailand Sales office, this thing:

This was where everything Dubailand related was being planned, however today it was having its models taken down so the building could get ready for demolition, this is kinda the final nail in the coffin for Dubailand 1.0 and a reminder of dreaming too big. RIP Dubailand 1.0

Quite a coincidence, I was reading about Dubailand last night... I bet if the financial crisis of 2008 hadn't happened, much of Dubailand would have actually been built, but I guess no one knows for sure... it's kinda sad as the project was so ambitious, and could really have happened. I know many of the parks have moved over to Dubai Parks and Resorts, but it would have been amazing to have seen them as part of Dubailand. 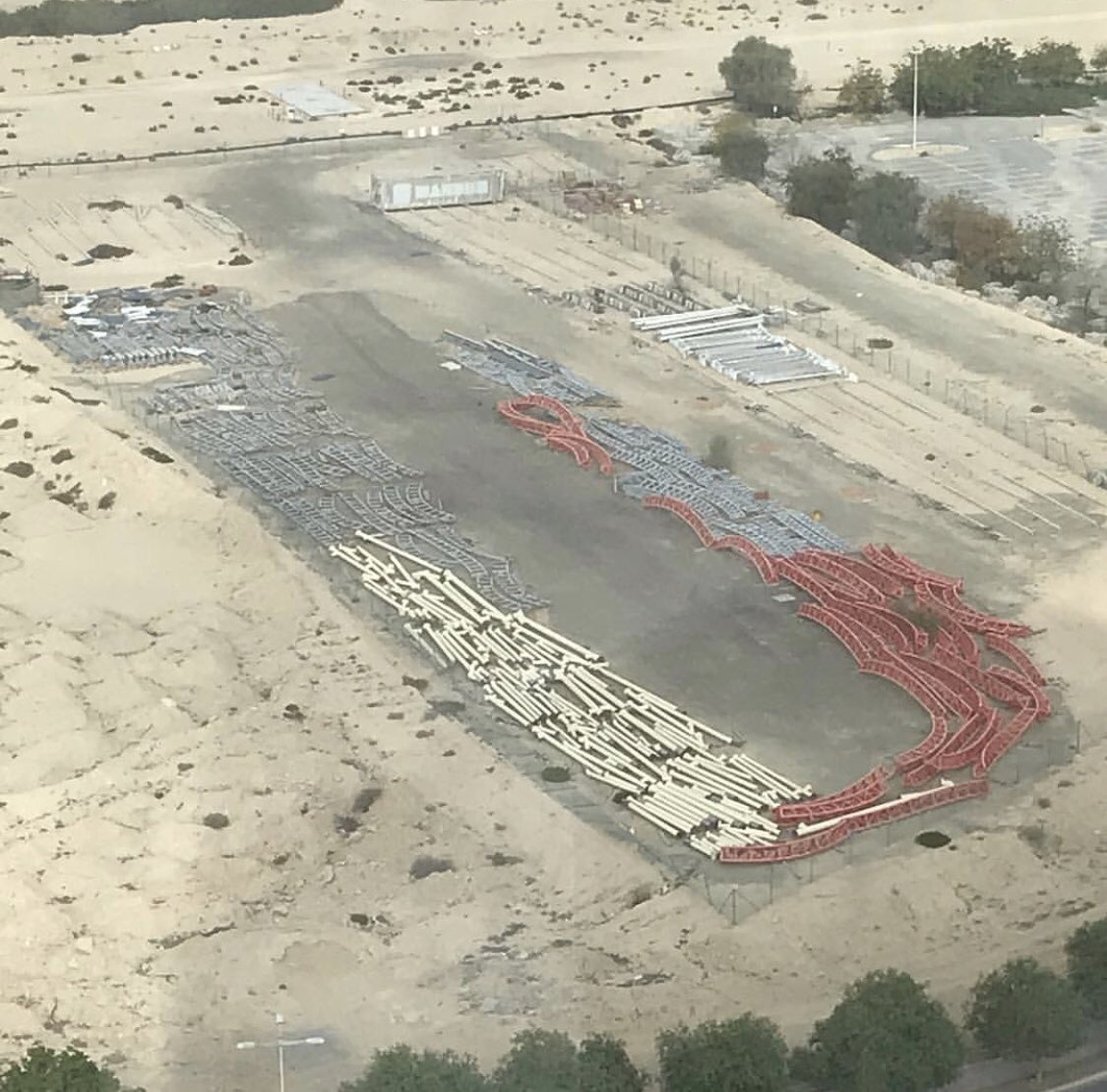 Progress on F1-X has pretty much stopped once again, with the cranes not present anymore. However the track for the 2 of the 3 planned coasters, a red Euro-Fighter (Same layout as Huracan at Belantis), and Premier Rides 'drifting' dueling coaster has been moved out of a junk yard piled with sand. This time they are all piled together next to a car park near the F1-X site, waiting for a home after being abandoned for nearly 10 years.

Whether F1-X will come about anytime soon is up for debate, the park is still a prime objective for Dubai Holdings, so I guess we will see.

What, So there's a Eurofighter that's never been used just sitting there idle?

If that went up for sale I'd imagine it going quite quickly.
[Insert Signature Here]

Bert2theSpark wrote:
What, So there's a Eurofighter that's never been used just sitting there idle?

Well, half a Eurofighter. I'm told that not all the track was shipped to the park due to the failure of Dubailand, so Belantis in Germany ordered the rest of it and paid for the construction of the rest of the track.

Ambitious plans for a 20th Century Fox World theme park in Dubai are on hold due to concerns about oversupply, according to Mohammed Khammas, CEO of Al Ahli Group. It was due to be completed by 2020, but work has yet to begin.

“We've realised that there’s now a serious supply of theme parks in Dubai,” Khammas told Arabian Business, in an exclusive interview.
“The developers have done an amazing job, and the existing offering is perfect, but right now people should stay away from developing another one, at least for the foreseeable future.”

Users browsing this forum: No registered users and 87 guests