You'll probably find it'll be sometime mid beginning or mid December or so.. when was the first picture reveal for the Structure? Because if it was after the first week in a December when it snowed we can start to build a timescale of when it was taken, with the helix sound walls off.

Just pointing this out, that turn out of the second airtime hill sound tunnel looks absolutely insane.. quite sharp and banked compared to other sections.. surely it'll be doing a bit of speed for such a degree of banking?
“A surprise to be sure, but a welcome one”
Top

I think the tunnels either side of the maintenance building may be to block the light - so whatever in there is kept in the dark..

Nick Streak feels really short so I hope that whatever is in that maintenance shed prolongs what is going to be a very short ride experience.
SeaWorld has rescued over 35,000 animals in need![/i]
Top

MakoMania wrote:
I just realised that Nickelodeon Streak actually has a longer track length than this ride

Nick Streak feels really short so I hope that whatever is in that maintenance shed prolongs what is going to be a very short ride experience.

Wickerman is only going to be about 100m shorter than nemesis... so never underestimate what you can fit into a short track!

Also Nick Streak is a basic out and back coaster with very little in the way of thrill, the more thrill the better the experience will be
Top

Dan wrote:
The below photo has been posted on Instagram by @therollercoasterproject and shows us a view of the Wicker Man from ground level. It looks mighty impressive! 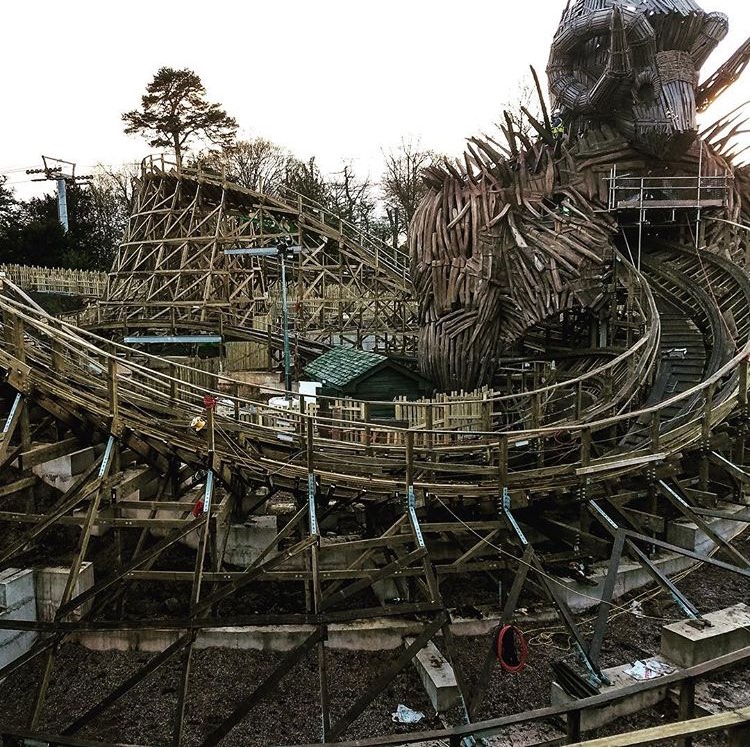 Wow, that really is going to be some headchopper (you have to remove the scaffold in your mind but it's still looking close- the banking makes it look even more so) - could this be like Oblivion's impossible chasm- that great illusion of being too tight a gap to get through- imagine approaching it at speed (if indeed this is the 'in' side of the aperture). Looks to be similarly intimidating with the lower one too.


Absolutely love the colour of the buildings too- it works so well visually. You get a nice variation of colours rather than just one which looks good too. Great choice of materials and palette.
This coaster is shaping up to be one stunning beast.


And agreed, sound tunnels round the station is interesting- for darkness? as there's audio/ effects in there? to avoid spoilers for the preshow? #Whatsinthesoundtunnels

Nick Streak feels really short so I hope that whatever is in that maintenance shed prolongs what is going to be a very short ride experience."-


Nemesis looks quite small length-wise on a photo and is 'only' 2349 ft but what an awesome 2349 ft they are, 2028 ft does seem a bit short changed for a wooden coaster being opened in 2018 - it will be one of the shortest wooden coasters globally and all the well-known UK ones are longer- but Nemesis proves size isn't everything as lots of people like it more than longer rides of the same type- a short ride can pack a lot of power.


The odd thing is looking at the construction pics I don't immediately think 'oh that's a bit short' which i think is a sign that the many twists and turns are the more important factor, look at some of the longer coasters and they do have that 'oh that looks short' factor as the layout's quite simple as Phild94 (who seems to be thinking similar as they've posted similar thoughts whilst I was typing!) has pointed out.


Hopefully people love it and Merlin go for another, bigger woodie in future.

The way that picture is taken, the track that comes out of the chest, the train will go through that towards the camera.. it does looks very close on those 2 openings we can see.. however I am looking forward to the first headchopper which we can't see, as it looked incredibly close on the construction pictures.

If you look at the station with the concrete still there, it looks like they are going to do something with it before opening, as that will be the only concrete section of the ride we can see, plus it doesn't look right as the rest of the concrete walls have been themed, and the building with the concrete doesn't go.. think AT will know this already.

As for the length, yes it looks a little short I think aswell, but it will pack a good punch, this is also a family coaster after all, but I don't think we will have anything to worry about.

As for a future woodie.. I think AT will have one being enough.. however I do think Thorpe will take on the feedback of Wicker Man and pursue a GCI or RMC.. just have to wait and see!
“A surprise to be sure, but a welcome one”
Top

Off the topic slightly, but if THORPE do have a wooden coaster, then we are certainly not looking at 2019/20. It would be likely to come after that. I think it is very likely for them to add one though, especially around 'Old Town'.

I personally think Wicker Man will be very well received!

I also notice what seems to be the ORP Booth too. If I remember correctly from the plans the building circled will be HB Leisure games stalls. I expect the ORP will most likely be at the point where you enter the shop after exiting the ride.

If I remember correctly, you enter the main shop and the ORP’s are right there on a raised platform area (may have been scrapped and is now on the same level) then the shop took up the rest of the room!

If I'm honest, it'd seem like a bit of a design flaw to have the ORP right at the entrance of the ride, and not near the exit.

One thing I was wondering, does anyone else think that we could be seeing some trees / more vegetation planted around the ride area, or are they just going to leave it to grow back naturally? I'd at least like to see some trees planted, but that's if they've got enough room I suppose.

I'd imagine the ORP's for Wicker Man will be available in the shop itself as I can't just see all of that area just filled to the rim with merchandise!

On the subject of the shop I hope it is like DBGT's current shop because that's awesome.
[Insert Signature Here]

Robert.W wrote:
One thing I was wondering, does anyone else think that we could be seeing some trees / more vegetation planted around the ride area, or are they just going to leave it to grow back naturally? I'd at least like to see some trees planted, but that's if they've got enough room I suppose.

Checking the planning approval document, there's a condition on there which states that the shrubs, trees and planting shown on the plans need to be planted before the ride opens, and maintained for 5 years. These are likely to be one of the last things to go in on site.

you can have a look around the planning application regarding the planting here: http://publicaccess.staffsmoorlands.gov.uk/portal/servlets/ApplicationSearchServlet?PKID=111996
Top

The latest aerial pics do show that trees/shrubs have been planted in the area between brake run and drop out of the second sound tunnel and also at the top of the site at the bottom of the first drop.
Top

Thanks Joe for pointing out that they have to plant trees before it opens. Should make the area look quiet nice once they grown a bit!

Also, I did notice that some vegetation had already been planted in some areas, I was just wondering if we would see any actual trees planted at some point (which it appears that we will), and maybe some more larger vegetation in the areas around the ride structure.

According to the planning there will be wild meadow planting and trees going in (albeit <2m tall). When mature it should look great, but that’s a long way off and assuming it isn’t neglected by Merlin.
Top

Tyrant wrote:
According to the planning there will be wild meadow planting and trees going in (albeit <2m tall). When mature it should look great, but that’s a long way off and assuming it isn’t neglected by Merlin.

I think this is one of the rare occurrences where a little neglect wouldn’t be a bad thing! Some overgrown bushes and trees would look great on this ride.

As long as they keep the effects going I’m happy!
Top

A friend was at the Resort today and saw Wicker Man testing.
Top

Very interesting! Is your friend able to give any more details?