https://www.youtube.com/watch?v=ma6IJTcSfsM&t=0s
We were born to fly...
Top

Nice video update. Anyone else think that it is actually has a very similar first drop to Nemesis..

Chris wrote:
Nice video update. Anyone else think that it is actually has a very similar first drop to Nemesis..

Yeah, that has actually crossed my mind too. I guess that must have been John Wardley's influence

You know what else SW8's first drop reminds me of, The Smiler's first outdoor drop minus the inversion.

It's funny how 2 completely different coasters can compliment each other so nicely! One one hand we have on coaster built wth concrete and lots of steel and the next coaster built out of dirt and wood!
[Insert Signature Here]

The Smiler's first outdoor drop minus the inversion.

It seems to dip down, flatten out, then dip down some more, anyone else think that that could potentially carry some airtime?
Top

The Smiler's first outdoor drop minus the inversion.

It seems to dip down, flatten out, then dip down some more, anyone else think that that could potentially carry some airtime?


But also, as previously mentioned, SW8's first drop also looks similar to that of Nemesis'. (0:41)


Personally, I hope that this is something on terms of thrill level just above TH13TEEN and hopefully SW8 packs a punch for it's size!
EDIT: It turns out that SW8 is the same size as Rita, Just a fun fact there.
[Insert Signature Here]

In what way do you mean size? Height of the ride or track length?
Airtime Machine, Shambhala!
Top

OhShambhala wrote:
In what way do you mean size? Height of the ride or track length?

Ahh, I should of been more specific, I meant height, both rides are 21m high but obviously SW8 uses it's terrain whereas Rita's lowest point is station height.
[Insert Signature Here]

Bert2theSpark wrote:
both rides are 21m high but obviously SW8 uses it's terrain whereas Rita's lowest point is station height.

From SW8's lowest point to its highest, the ride is 22M (main ride). The station is also only about 4.3 meters higher than the main ride's lowest point so don't expect it to 'use its terrain' much

Thanks to DeadJack5, a number of photos from today have just been posted on TowersTimes Facebook, with recent progress seeing the bents for the entrance to the helix around the site of what was formerly The Flume's station going in.

Was on site in the afternoon for a few hours today so wanted to get an update on SW8. Will be doing these updates for the next few months hopefully as often as possible.

It's been amazing to see how much progress has been made in just under 2 months since my last visit.

Enjoy these photos! (these were the better ones of the bunch taken today) 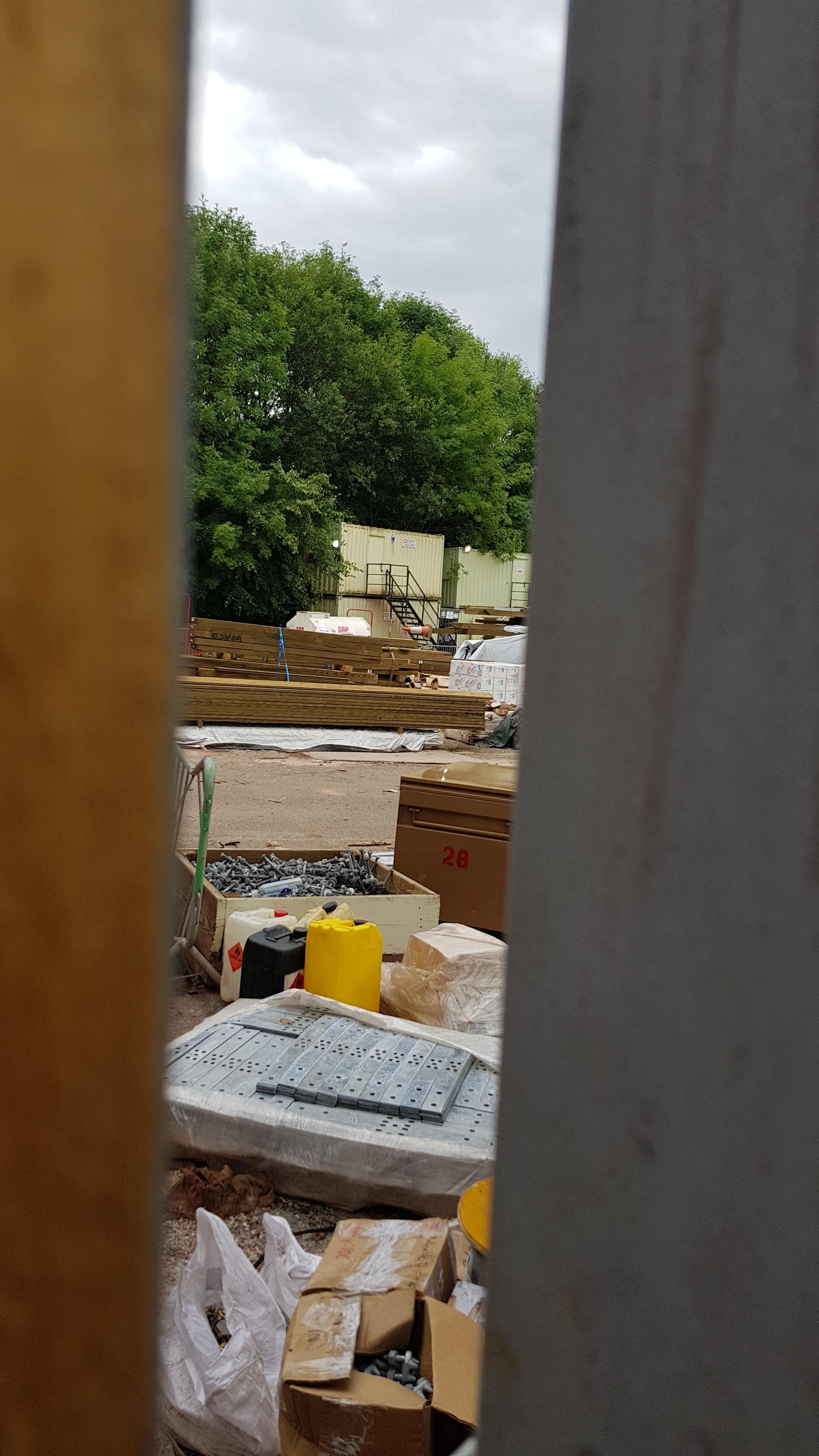 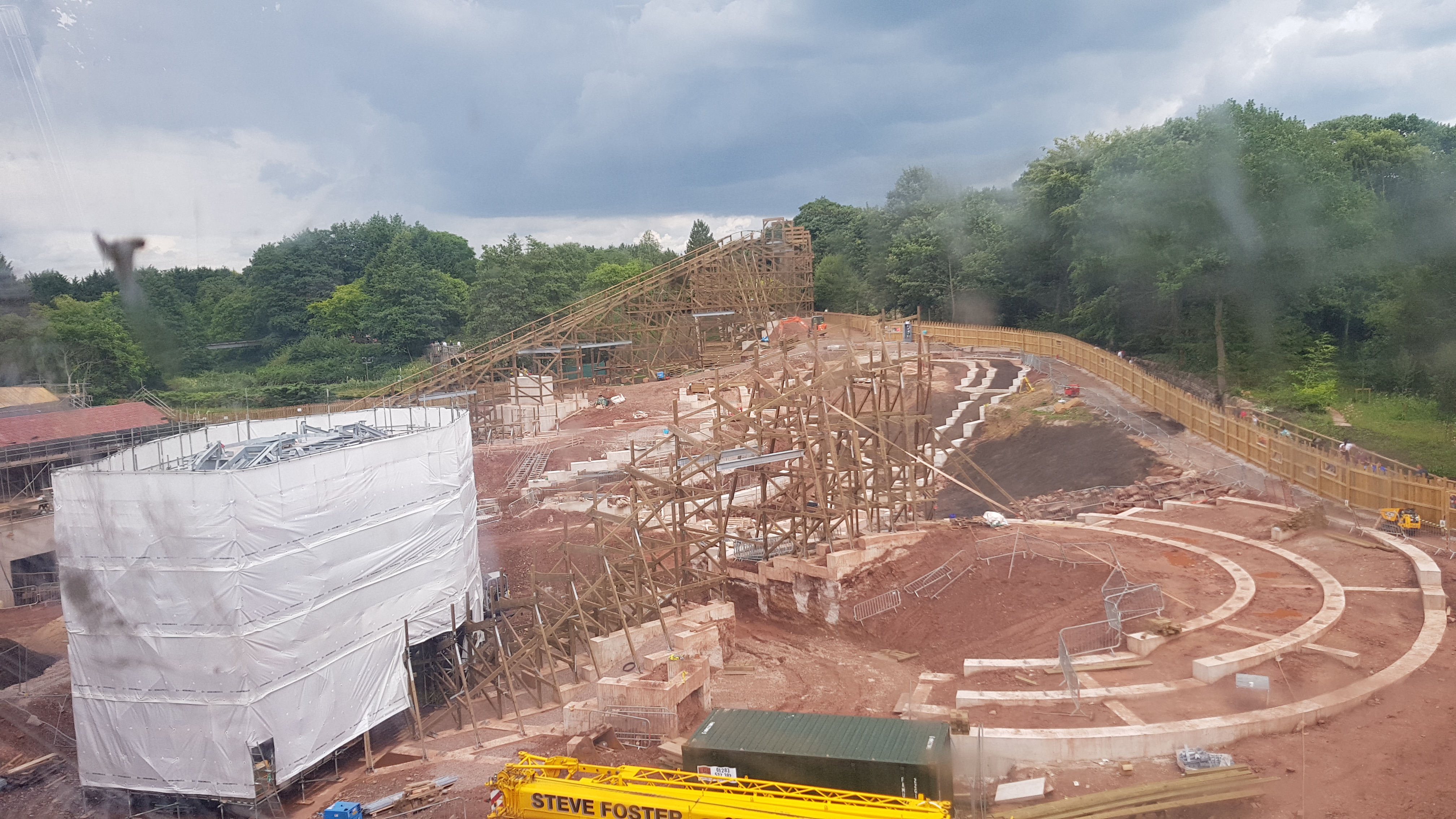 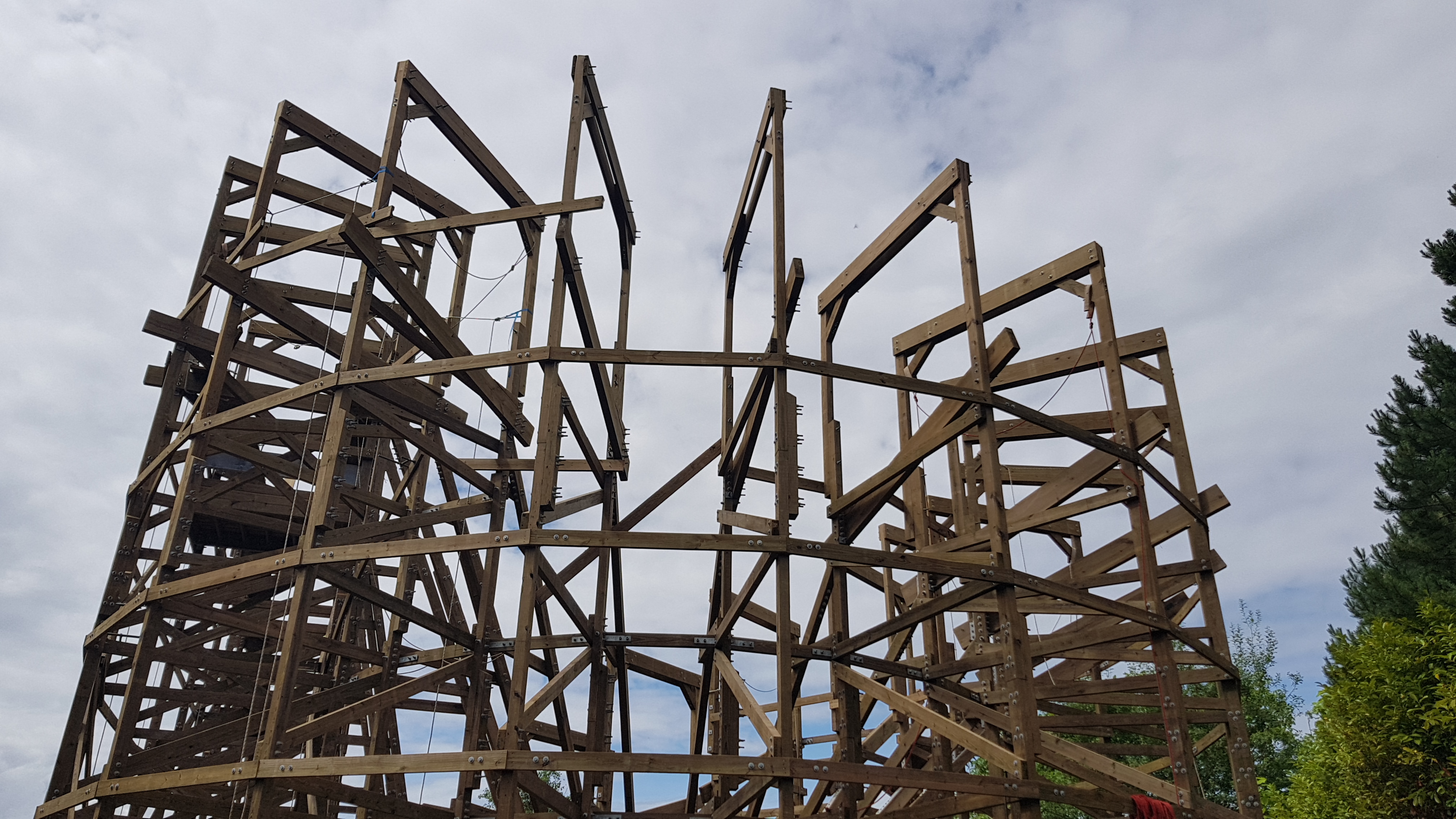 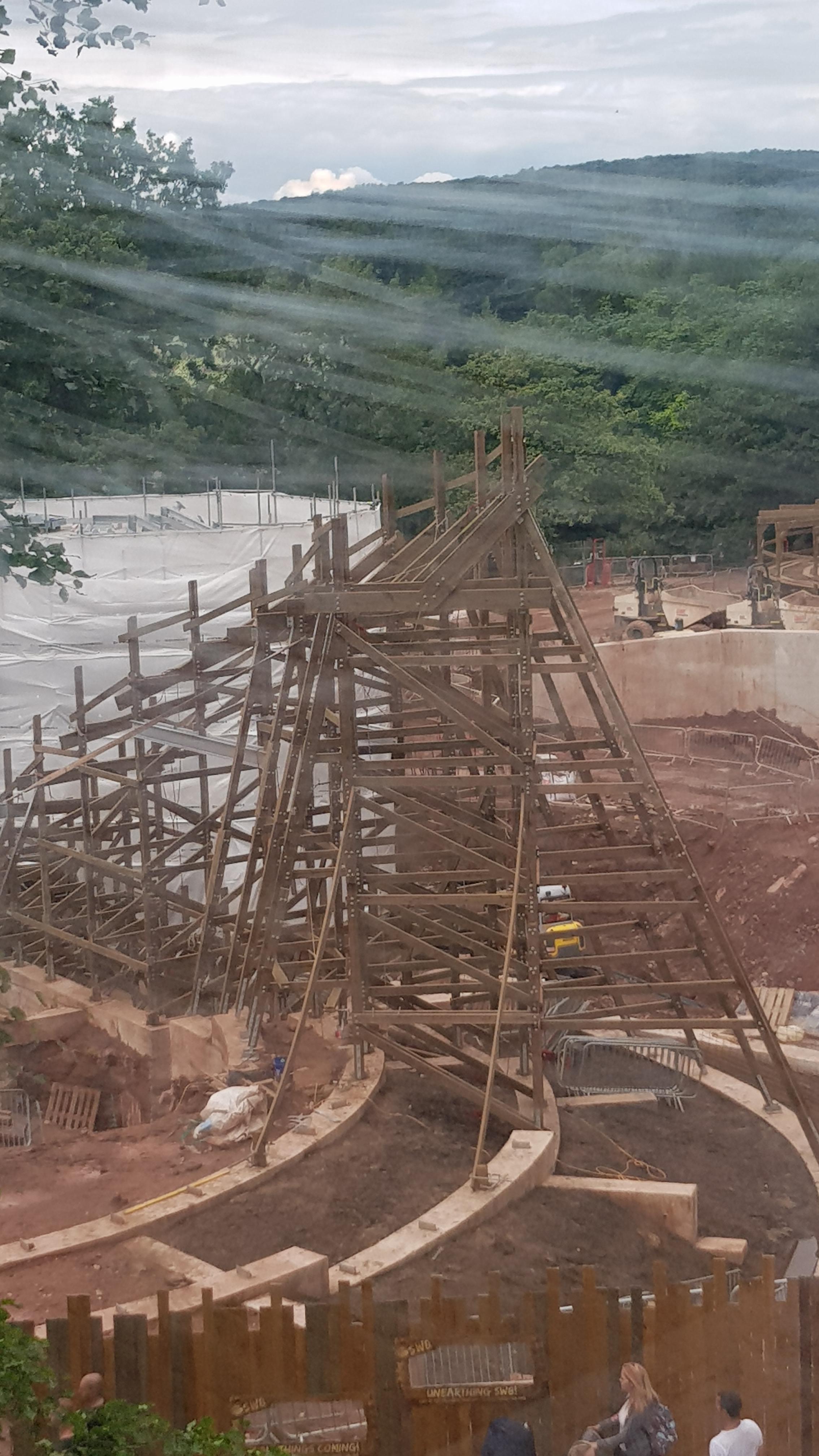 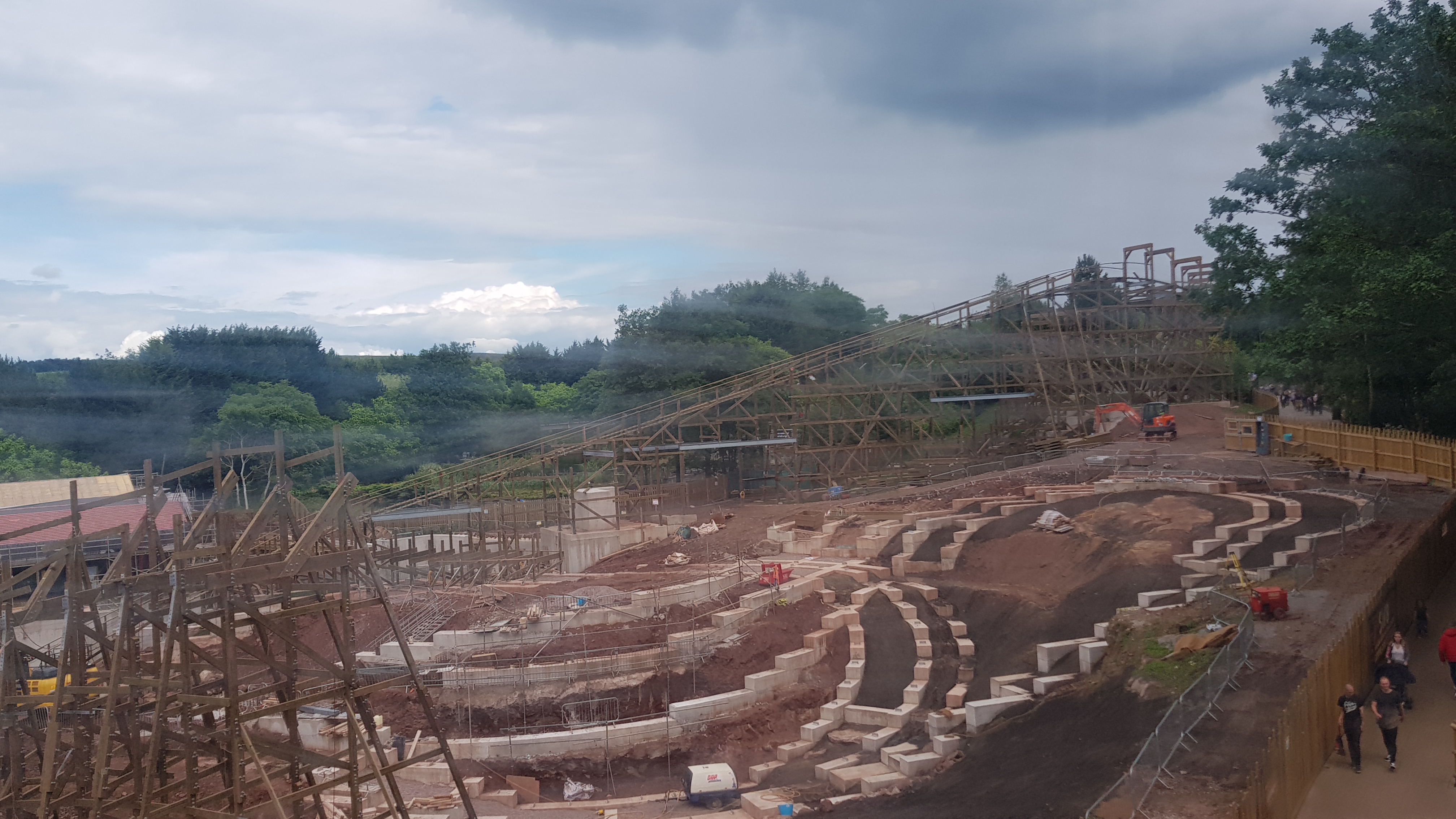 Looking very nice, getting more excited by the day!
Top

In this image supplied by Towers Times Facebook, you can see how there is a gap in the wooden bents and a clear pathway through it! This will most likely form a part of the queuline or a pathway to get to the ride. Its very exciting to see now everything is begining to take shape. The queuline should be one of the best at towers, going under the structure and watching the coaster go through the course will make it very interesting,
Airtime Machine, Shambhala!
Top

The drainage report does indicate that trench and it leads to a small plaza in the middle of three concentric turns, the small area that still needs foundations making.

If there's one thing that surprises me more than anything, it's how much height clearance they've allowed for with the support structure. makes me wonder if that pathway will be used for vehicle access if any large plant needs to be used from the plaza. Again, having seen it for myself, that trench is DEEP.

Yeah that path could just be for easy vehicle access to the site. I've heard wooden coasters need a lot of maintenance so maybe they're just planning ahead for that.
Top

Do people think they will paint the steel support beams brown? They kinda stand out.
SeaWorld has rescued over 35,000 animals in need![/i]
Top 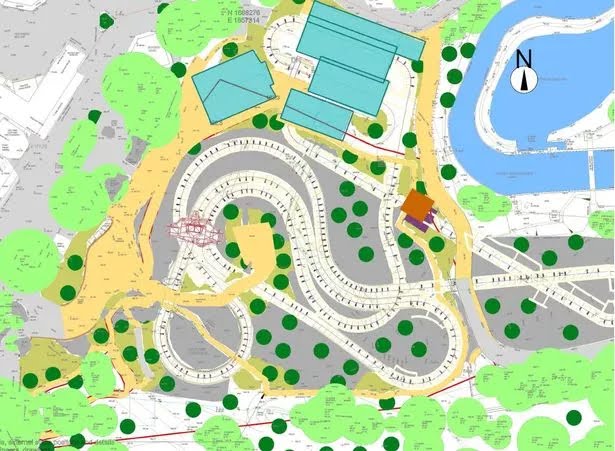 (EDIT: I have no idea how to insert pictures

MakoMania wrote:
Do people think they will paint the steel support beams brown? They kinda stand out.

MakoMania wrote:
Do people think they will paint the steel support beams brown? They kinda stand out.

I also doubt this, as you look at other wooden coasters from GCI, or RMC and the beams are the colour as they are.. Personally this looks more modern compared to other wooden coasters, and can be quite interesting to see the engineering behind it.. being an engineer myself.
Top

Personally, the steel beams don't bother me that much, I'd be more bothered if the majority of the structure was steel rather than wood - such as on Invadr (which looks very ugly).
Top
Locked

Users browsing this forum: No registered users and 1 guest
×