Maybe they'll take a leaf out of BPB's book and have an animated POV of the ride playing.

They appear to include speakers. Will that interfere with the heritage soundtrack already playing?

Might get some proper official hints at a theme soon instead of speculation from planning applications and the like. Or we could just get some more misdirection...

For some reason, I feel Scarefest will play a part in some way.  Be it a link with the theme, switching on of the screens or push in marketing. On the other hand, I'm hoping they are on when I'm there in August! 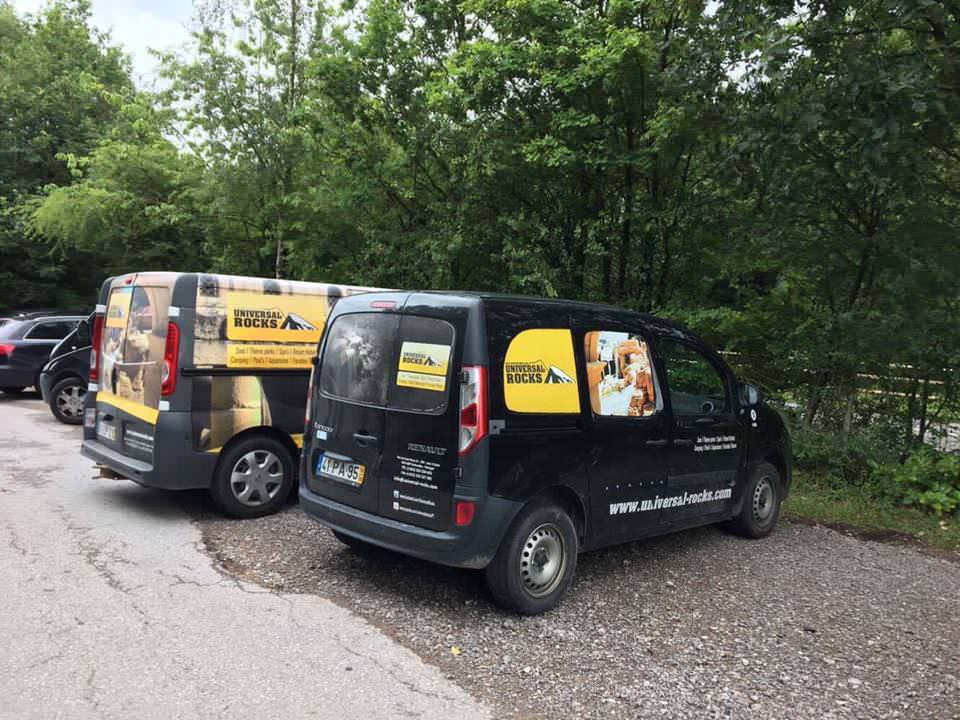 The same company that did the rock work for Taron at Phantsialand have been on park today!

That's interesting, and at the same time very encouraging. Whilst we won't yet know exactly where this rock work is going to be, having a specialist come in to create and install it suggests that there is going to be a substantial amount of it, and that it will be high quality theming. It's entirely possible that they may have been on site today simply for a consultation, however I do wonder if they are looking at potentially having some rock work on the metal structure that's recently been covered and this work is about to get underway. Perhaps we'll soon have another different element of construction to keep an eye on?

Getting more excited for this with each day! I was at the park 2 days ago and the amount of earth that has been moved is huge! It's not quite on par with Nemesis' terrain alterations, but it's not a million miles away!
SeaWorld has rescued over 35,000 animals in need![/i]
Top

AltonOperator wrote:
They appear to include speakers. Will that interfere with the heritage soundtrack already playing?

The heritage soundtrack is probably only supposed to be temporary on the SW8 path, until they have got theme music for the area in 2018! It will still be played in other areas like the gardens and fountain square though.

I have a feeling that said rockwork will be for the lower station/preshow areas which are currently concrete walls. Certainly interesting stuff!
Top

You could be onto something there, that little preshow bit done up to look like it's underground would fit in with the 'groundbreaking' bit people were speculating about
Top

Given the company's name, it seems the assumption has understandably be made that they are on-site to produce themed rockwork, however after having a look around the portfolio on their website there are also examples of them producing 'timber themed render'. This is in line with the proposed materials submitted to the local council earlier this year which stated that the theming features would consist of "timber themed render and steel" (and there's obviously no disputing the latter now).

Now obviously this doesn't mean we'll not also see some form of rockwork, as the descriptions about the materials being used are limited and brief, but until we see what's going behind the scrim we can't know for sure...

This certainly adds fuel to the fire. I checked out their website yesterday, although not in much detail, and it is encouraging to see what these guys can do, although Taron speaks volumes! Hopefully, more hints will be given soon!

The path that runs alongside SW8 is reportedly closed today as more bents are being added. Perhaps that's why we saw so many of them being built over the past few days, so that they could all be installed at once and allowing for the path to be closed for the shortest amount of time possible.

I believe (But could be very wrong) that the path was only closed for a few hours and reopened that same day once the bents had been installed.
Top

Okay now I am confused.. the plans state the queue line goes off to the right and under the track..

But due to recent pictures from TPW.. this doesn't look the case anymore?

The screens are working but it doesn't look very interesting. Hopefully something more exciting will come in the future.

No doubt, this is a holding page!
We have similar screens at work, which can be operated remotely (Onelan) from any PC. Presentations can also include sound.

Definitely. Once they have them all ready, they'll do something good. Otherwise they were a bit waste of money for a graphic that could have been displayed non-digitally for practically nothing.