by Dom
This is your main port-of-call for any discussion relating to Mutiny Bay and Katanga Canyon, and the effects SW8 will have on the areas.

For discussion about SW8 itself, then head over to our Ride Speculation and Discussion topic. Also don't forget our SW8 Construction topic to discuss any of the construction happening at the park. Once the Alton Towers Resort marketing machine gets into full swing we will also have our Marketing and Viral Campaigns Discussion thread.

by Liam.W
Personally I see SW8 being classed as Katanga Canyon. A tribal theme on a wooden coaster is something that really appeals to me so I'd love to see it in KC!

by S.J_O'Grady
I'd really like to see KC and MB combined into one large area, not that I think there's any chance of that happening. If it does end up in KC then I just hope its theme isn't too "sinister", that could ruin it for me. I like to see some intense thrill coasters that don't have that theme of apocalypses and dangerous experiments. Avalanche, for example.

by MakoMania
I'm imagining what the SW8 ride area would look like in my head presuming it's in Katanga Canyon and I'm getting some major Skull Island: Reign of Kong vibes. Like this but on a smaller scale obviously: 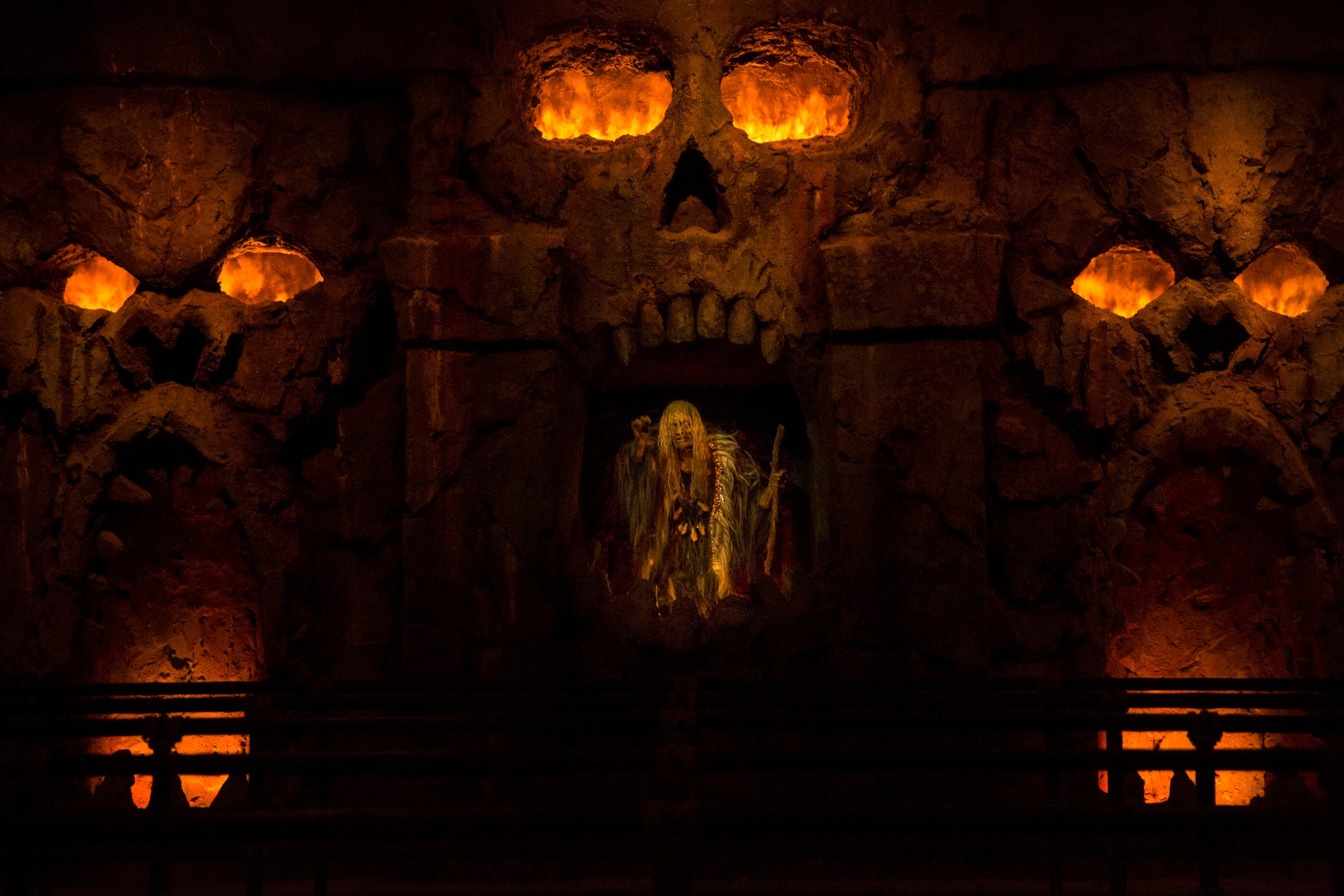 A tribal voodoo (spooky but not overly intense) theme would be really great I think. If they went for an intense theme, I wouldn't be complaining as I love dark horror themes, but at the same time I do realise that aside from Galactica and possibly Rita, there isn't a major coaster on park without at least a partially dark theme. An African voodoo/Wicker Man theme on a wooden coaster really has a lot of potential, especially given that the ride will include a pre show and some sort of indoor section. It could be the thing that makes this attraction!

I could also envisage the renaming of Katanga Canyon to Voodoo Village or something to the same effect. I think this would really help the area fit well with SW8 and wouldn't require any major scenery changes to the rest of the area. Having said that, I don't think keeping the Katanga Canyon name would be a huge issue either.

by Chris
Nice idea. I am just not sure Merlin really need another dark, scary theme. Almost every major attraction in the last few years is dark and gloomy. Let's have some colour for once!

by Sawboss
I agree, I love dark themes but you do reach a point where you think, 'Sooooo... is this purely a halloween theme park?'.
Having said that, I like the idea of a voodoo themed ride.

by RedStar98
I'd really like to see a Mutiny Bay/pirate themed ride, I know many people are thinking it will be themed around Katanga Canyon, but it would be interesting to see if there's any crossover between the two areas, especially as both are considered 'family' areas, the apparent target for SW8

by Stan.H
Not sure how this'd work, but I'd quite like to see like a Tribal invasion theme, like Tribes taking over Pirates property, so theres a mixture of voodoo, tribal and pirate theming. Would be quite interesting to see!

Stan.H wrote:
Not sure how this'd work, but I'd quite like to see like a Tribal invasion theme, like Tribes taking over Pirates property, so theres a mixture of voodoo, tribal and pirate theming. Would be quite interesting to see!

It would be, at the least a very unique and interesting theme. I would love to see Merlin try this out.

by jaybee85
I'm not sure what I think about how the area is likely to be themed, or even if it should be. The nearest existing ride of this sort is Megaphobia at Oakwood, and one of the reasons I feel that ride is so great is because the ride itself IS the main event; riding a woodie is so much fun, without needing any other off-ride distractions. But let's face it, this new ride at AT is highly likely to have some sort of storyline and be integrated into a themed area. In terms of already existing areas in the vicinity, I'm not a huge fan of the Pirates theme at AT, mainly because it's aimed at a much younger demographic than myself (I'm a single thirty something with no kids or desire to have kids) and I don't think that it can ever truly compete with what Disney do Pirates-wise. I kinda feel the same about the Mine Train theme tbh. Since Chessington has really expanded on the African theme in recent years, I always assumed that Merlin would begin to phase that out of Towers and that Katanga would morph into something else. Don't get me wrong, I love most of that landscape, from the rock-work to the waterfalls, to the lush vegetation, but it'd be relatively easy to overlay different elements to alter that environment with a new theme. But again, that probably won't happen. So I'd quite like the ride to be linked to the Haunted Hollow / Gloomy Wood areas somehow.

by T0mPr1ce
I've seen a few people suggest that the map shows SW8 is in Gloomy Wood, I was under the impression it was comfirmed as part of Katanga Canyon? I feel like this is just because the map has been designed to not include the path from Mutiny Bay to KC. If anything, the map shows SW8 is closest to Mutiny Bay!

by MakoMania
I guess the queue will have to lead from Gloomy Wood through the woodland where The Flume was then. Very strange indeed!

by T0mPr1ce
I didn't expect this at all, I guess the wickerman theme does fit with Gloomy Wood.

Will the ride entrance be switched to the opposite side of the ride area then? So you actually have to go on the Gloomy Wood path to get on the ride rather than the entrance facing Mutiny Bay?

by S.J_O'Grady
Perhaps SW8 will see a retheme of GW? That way the map is correct in saying the ride will be in that area, but the area will have a different name. Could Duel be removed and an accompanying flat ride in its place maybe?

by Owen
Surely they must be having a laugh? Trying to trick people or something. Then again with all this conflicting information coming from the park maybe they aren't even sure on where to put it yet.

Just for reference, taking the most recent plans these are the routes that directly link the main Gloomy Wood area and SW8 entrance together (drawn somewhat poorly). To me that seems like confusion waiting to happen as any new or rare visitors are likely going to head to Gloomy Wood anticipating to enter the ride here, not a 8 or so minute walk in the opposite direction. Not to mention really, if this is a pagan/voodoo inspired theme it really doesn't work with the haunted forest of Gloomy Wood...

On the other hand, if the attraction were part of Mutiny Bay, the area where I personally think the alleged theme would make more sense (albeit very Pirates of The Caribbean) the route would be something more like this... I really hope Alton is just pulling our leg here, as otherwise I've got to admit I'm getting more concerned about this rather than excited...

by S.J_O'Grady
I can honestly say this is the most confusing build up to any new attraction ever!

I'm right in thinking that the plans have already detailed materials that will be used to construct the buildings, yes? Didn't these perfectly match the style of KC, or possibly MB? Certainly not GW. The way I see it, they've got an area of land and a rollercoaster. They can choose any theme they like, so surely they won't choose a theme that's almost identical to DF?

I had a feeling that the release of this map might give us a clue, theming wise. Maybe give us an idea of what to expect and answer some questions. Oh how wrong I was!!

Still, they have been known to do some odd things with their maps in the past. I have a copy if the 2009 map and it says on the back that the Towers are in FV!

by TheDuke
I think it could be cool to have an expanded gloomy wood area as long as the themeing fits after all it is the smallest area in the park. The the theme also isnt a dark theme in my opinion. Also if there is preshow or show area in the ride it could fit the theme well

by T0mPr1ce
I'm very sceptical about the location of SW8 in terms of MB, KC, GW. I think it will be rather strange to be stood in MB and seeing this largeish woodie a few steps away from you but for it to be a completely different theme. Baring in mind that Sharkbait Reef is literally a few steps away from the original queue entrance on the plans. It will also be very strange to walk past the coaster from MB to KC and and the ride to have a theme that doesn't match either of these areas. Furthermore you'll be able to see the ride quite well on the rapids due to how close they are! If it is to be GW my guess is that the queue entrance will be in a different location to the entrance on the plans. However, having this ride practically in Mutiny Bay and on the KC boundary and claim it's in the same area as Duel really doesn't make sense to me - I'm sure it would confuse most visitors.
All times are UTC
Page 1 of 8
Powered by phpBB® Forum Software © phpBB Limited
https://www.phpbb.com/