I completely agree with you, but from their point of view they cant stick a new advert on TV showing off a newly painted tunnel thats gonna pull in a load of new visitors.

They could really do with missing out on SW7 and spending the next £15m on park wide clean ups like the Air Tunnel, perfecting theming, and stuff like proper park lighting. But they won't do it, because of greed!
Top

"PeteB" wrote:
They could really do with missing out on SW7 and spending the next £15m on park wide clean ups like the Air Tunnel, perfecting theming, and stuff like proper park lighting. But they won't do it, because of greed!

No, they won't do it, because, like you said a newly repainted park isn't going to bring visitors in. It's just simple business. New coasters bring people into parks for the first time, these nice touches provoke re-visits..

I would love the park to go all out on making the park a nicer place, but I think they are slower exceeding. The park of 2010 is so much nicer than that of 2007..

I think next year is an opportunity for a large number of little touch ups, as the park is coming off the back of a great season and will be having a quiet year in terms of investment so the budget could be there.

Lightwater Valley proved you can do a lot with a modest budget, the Air tunnel doesn't need much doing to it to make a real improvement, they just need to hide the concrete.
Top

I agree and Scarefest proved how just one small blue light can make a difference. It didnt hide the mess in there, but it was an improvement. I hate the yourday/Alton Towers DVD equipment in there too. It just looks so out of place its unreal.
Top

Some metal panels and blue lights is all it needs and also a decluttering, and once again, it doesn't surely cost too much.

I think it could look fine with some of the metal paneling on the walls or the floor (like is on the floor when you get on the ride), with that they wouldnt have to ever replace it unlike paint which would need re-painting every few years. And with some nice blue lights it could look quite futuristic.
Top

Also, just looked at the original theming concept art for the for first time over at Towers Almanac. Cripes (that's right; cripes. Deal with it 8) ), the actual outcome really was quite a let down. The water features certainly would at least have helped for a smoother transition between Air and Nemmy. Also, I'd love to have seen some of those crazy birds from mutant racers appear somewhere else in the area.
In the coat you wore to Alton Towers is still the way I see you now...
Top 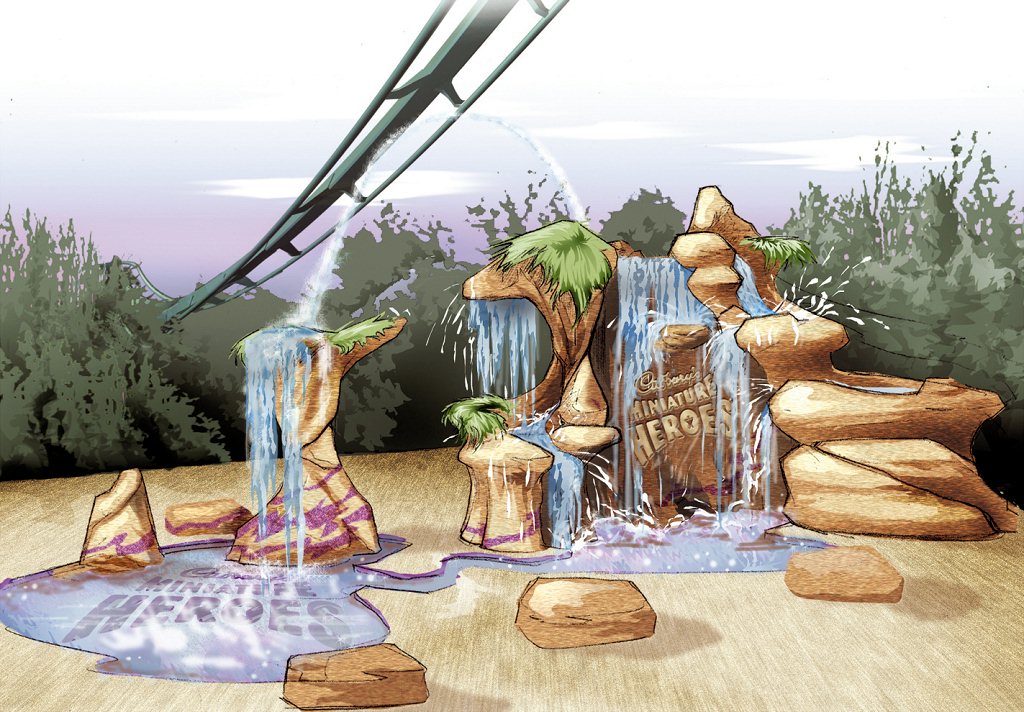 I believe Airs entrance was always meant to be the giant fin. However the Cadburys Heroes sign is remarkably similar to the rocks and waterfall at Mantas entrance.

After the main drop several geysers were supposed to spray up towards the rider’s feet. The effect would have been similar to Mantas water skim. 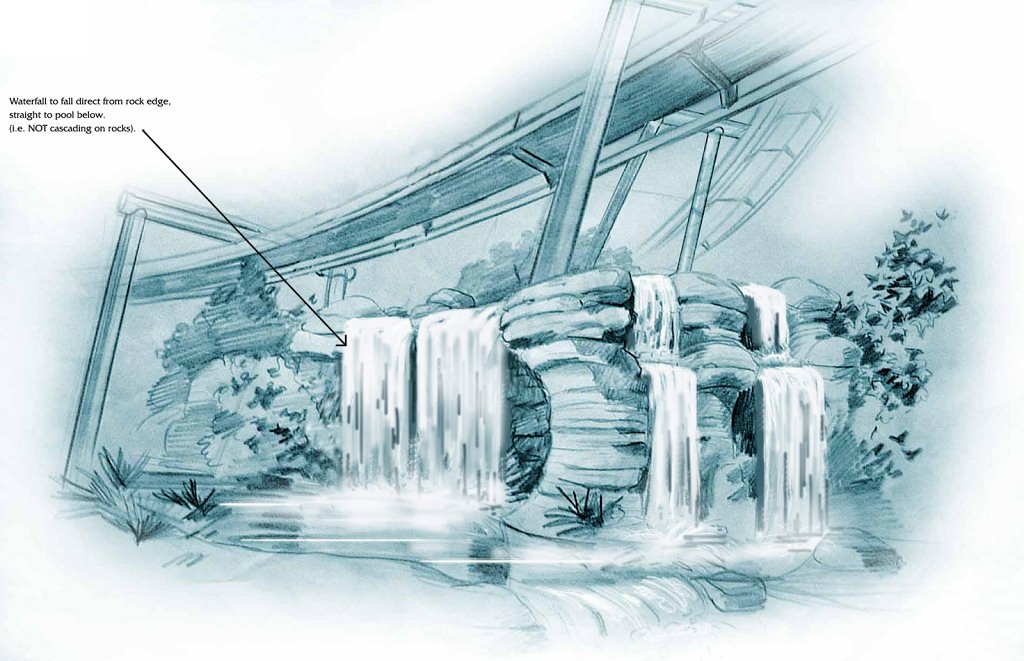 Manta fly’s very close to a waterfall just like this but I can't find any images.

Although the track isn’t shown this waterfall was going to be as the train fly’s out of the tunnel towards the station. Manta effectively pulls the same trick before the final inversion. 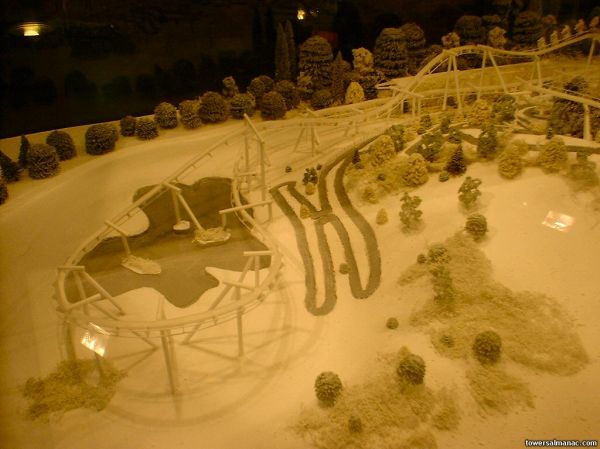 There was also a plan to excavate a lake under the final turn, much like Manta. Instead they opted for a concert path.

As Sea World has demonstrated all of these ideas would have worked brilliantly for Air. It was such a shame they were pulled from the final design, pulling down the rides true potential. I live in hope that one day Air will need a re-theme and the old plans will be brought out again.

I seems to be going of the topic of the tunnel but if this theme was to return then they have a new option. Add the rock theme on the walls and have a water trench on the floor for fountain effects much like the ones under Ripsaw, except that these will never get close to riders, just to worry them that they might spray higher. The tunnel becomes a cave, adapting Airs Oasis theme and the current Forbidden Valley rock work. It wouldn’t be a cheap conversion but it would open up the option to add lights and mist for a really atmospheric start. Of course the tunnel would have to be waterproofed but this is more a “what if” suggestion rather than something I expect to happen. Possible but not probable

The floor of the tunnel has to be solid, flat ground in order for staff and maintenace to walk around in there in the case of an E stop or something, I'm afraid. But that does not excuse the fact that it is completely bare, they could certainly put something on the floor, and themework to the sides.
Top

Bill, I think people mean using this kind of flooring:

Yes, that would be fine to use metal grating, as long as there was still enough clearance between the trains (when in the lowered position - in the case of an evacuation) and the floor. However, fountains like the ones Nightfall suggested may be a bit much! :P
Top

I was thinking more of very small fountains that only just pass through the grating. Like those under the Vienna Wave Swinger at Europa Park (A kind of toned down version of those on Chessington’s Monkey Swinger. very toned down)

"electricBlll" wrote:
Yes, that would be fine to use metal grating, as long as there was still enough clearance between the trains (when in the lowered position - in the case of an evacuation) and the floor. However, fountains like the ones Nightfall suggested may be a bit much! :P

I think having the fountains through the gratings would be a great idea, and would add quite a bit of uncertainty to the riders (ie the Ripsaw effect) as they were going through the tunnel. You could easily raise and lower the fountains as the train passes through to give the effect that people might get wet.

The E-stop problem could be avoided simply by having the fountains turn off when the ride is stopped. Also, having gratings kills two birds with one stone, because it can be used for drainage of both the fountains and any water which runs into the tunnel.

I'd love to see this happen, however unlikely it may be that things get changed.
Top

Loving the idea of the fountains through the gratting. They would look good if they had underwater lighting benieth them. They would have to be blue naturally and what you said about them raiseing and lowering, they could rise as the car approaches and lower slightly when it is directly infront so they just pass under the riders. If there were two, one either side of the tunnel rising in pairs they could light up as they rise, working down the tunnel as the car move along.

"Jordan" wrote:
and any water which runs into the tunnel

Even the variety of water like substances which leave the mouths of chavs? Surely it may dissolve the grating due to all the rubbish in it :P

I love the sound of fountains, but aren't we all just dreaming again?

Fountains would cost quite a bit to install, Alton haven't bothered doing anything to the tunnel for this long, so the chances of fountains, lighting and other things seems very unlikely. Hopefully they will shock us one day and actually do something to the tunnel, as it does look dire and like a car park, not exactly what you'd expect to see at the UKs number one theme park is it?
Top

Unfortunately they have no intention of doing anything with that tunnel any time in the near future. The only thing air will be getting besides craft parts and a maintained ride is a new floor platen.
Top

Ah well we can all keep on dreaming :)

"BrettS" wrote:
Unfortunately they have no intention of doing anything with that tunnel any time in the near future. The only thing air will be getting besides craft parts and a maintained ride is a new floor platen.

Is this the "Tatsu grooves", and will it be done for next season?
Top

I'm not keen on the grooves. Manta has them and while it is an absolutely fantastic coaster, Air's boarding method is far cooler. But then, y'know rubbish tunnel. So if it just had the concrete grooves and no sound and light maybe the fact that the tunnel is bare wouldn't bother us all that much.
In the coat you wore to Alton Towers is still the way I see you now...
Top

"Sam"&quot;][quote=&quot;"BrettS" wrote:
Unfortunately they have no intention of doing anything with that tunnel any time in the near future. The only thing air will be getting besides craft parts and a maintained ride is a new floor platen.

Is this the "Tatsu grooves", and will it be done for next season?[/quote]
Indeed, thats what i hear anyway. Not sure if they will take a tatsu or manta groove style though, or go a different way. As both do the same thing but designed slightly differently.

It will get rid of quite a few major problems, along with taking away the common break down cause for Air.

EDIT: Sorry Sam, I'm not sure when it's due. I've heard very slightly from the grape vine that it COULD be next year. Don't hold me to this though! :P After all, it is Towers we're talking about. The lift chain has been needed TLC for years but still remains zero-priority.
Top
Post Reply