The World of David Walliams - *Delayed until 2021*

I think the inflatable arch is just to get people excited for the area, a bit of advertisement. If you look behind the archway you can see the actual entrance archway which is made up of books piled up on top of each other.
Ride count since the beginning of 2015: 2133!
Ride count 2020: 360!
Cred count: 117!

Yes there is the archway held up by books behind it so the inflatable arch will be for the opening ceremony I think when it opens. Maybe they'll do like a VIP/Media Preview Day on the 20th.
Top

Those inflatable arches were there at the resort promoting The world of David Walliams  briefly towards the end of last season.  They were in-between Spinball and the Smiler, the same stretch of path where they used to have the Carnival of scream scare zone.
Top

Hello Tom wrote:
The lack of posts in this thread demonstrates how uninterested everyone is in this.

They can make rides and family areas like Hex and Sharkbait reef - really good. But now an inflatable arch is deemed ‘on point’?

I’m not the intended audience, nor do I have children. All I can say is that, for everyone else, this looks like ‘cheap tat’ for UK’s supposed leading theme park. I do hope it exceeds expectations and can be enjoyed by all. Children are smart and aren’t going to be amused with crap that has been plastered with their favourite characters to ‘appease them’. If you’re going to make a whimsical ride you’ve got to shoot for ‘Splash Mountain’ not Kadabra.

Again, fingers crossed this is actually awesome. But I won’t be heading to AT this year.

I'm of the opinion it's a nice addition rather than a mindblowing one. It's definitely good the park is increasing it's range of rides.

I've been moaning for a while that AT has been in dire need of rides that aren't horror themed and are ones that an entire family could ride together. It's no fun having a member of a group going to a theme park and only going on ~4 rides, not because of queues but because those are the only ones they can go on.
Top

I’m glad that the area is having some investment, it was rather a dreary place before this season. I take school kids there so we always go into the area to get to the education centre and it was in need of money spending on it. I still think they could do more, too many facades with empty buildings behind for my liking!
Top

Mr_Gibson wrote:
I still think they could do more, too many facades with empty buildings behind for my liking! 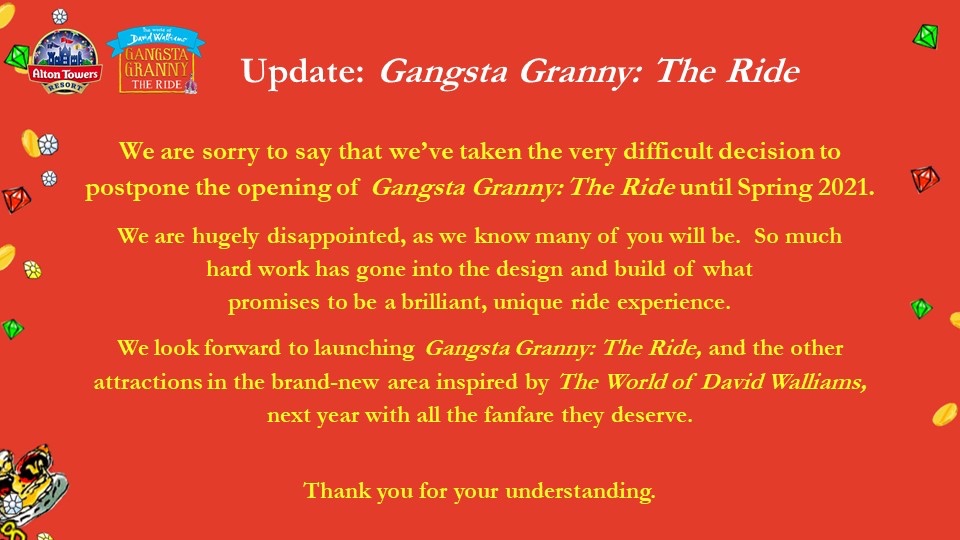 As reported on TowersTimes social media; Alton Towers have announced that the opening of Gangsta Granny: The Ride and other attractions in The World of David Walliams is to be postponed until Spring 2021.

The new area was originally due to open at the start of the 2020 season, but was delayed, alongside the closure of the Resort, due to the ongoing COVID-19 outbreak.

It's quite terrible that they've had to postpone the opening but I kinda saw it coming since they obviously want the full popularity that this area and ride can bring. It'll probably draw people back in after the current crisis. Anyways, yet again Alton Towers has made my little sister even more excited for our possible visit in 2021 or whenever everything gets back to normal.
~S.W (SilverWisp) A.K.A MJ
Top

Makes sense. They want it to boost visitor numbers but either the Merlin parks will be ghosttowns when they open or they'll hit their likely drastically reduced capacities very quickly.
Top

I think there is a PR angle to this as well. Open it for short socially distanced season in 2020,  and you can only do limited PR for the ride / land to start with. Meanwhile peoples opinion on the attraction is going to be tainted by the social distancing, that is a bad thing to have thing to have Year 1 for any attraction.

Also on the more cynical side, I dont believe there is anything new coming for 2021, so this helps with that
Top

Ultimately this was the correct decision for the park, you don't want your latest attraction open when it'll only be accessible to a certain amount of people until social distancing and restrictions have been eased.

Its a great shame as being Towers's 40th anniversary it is certainly a dampener, but fingers crossed that the rest of the season can go on in some form and 2021 be the year they can truly celebrate this new ride and area.

If anything, this may help them out in the long run. If they could somehow get families in to test the ride out and give their opinions, then they could tweak things and really make it something that's pretty great

That's why Disney soft opens a lot of their stuff before and then have a proper grand opening a month or two later.
Top

A video would be great. I mean, this is not a serious ride, it's for families/kids so it's not sacred.
Top
Post Reply

Users browsing this forum: No registered users and 147 guests
×