I think Sub-Terra is a brilliant addition to Forbidden Valley. Personally, I would love to see the attraction reintroduced as it is a nice story telling ride. I understand that it has apparently had technical issues, which I have experienced, but if these can reasonably be solved then it should come back. Reintroducing this attraction will also add a something to the top of Forbidden Valley, which at present is lacking something!

Ideally Sub-Terra needs to re-open, with the enhancements that it needed since day 1.. was a good ride don't get me wrong but I'd of preferred something coming into your face and visuals, instead of something stabbing me in the back

Nemesis needs to stay where it is, however, I do believe it is time for an upgrade.. so.. with what Universal Studios: IoA did for The Incredible Hulk.. the same thing needs to happen with Nemesis, new track, new trains, a remix of the soundtrack by IMAScore, and the return of the red water!

Galactica in my honest opinion doesn't need to be touched, as right now it is fine.. but I also believe this will be the first SW ride to go.

The blade is a good family ride in that area, so possibly a bit of TLC on the ride, but with the old site of Ripsaw.. I would love to see a clone of Rush from Thorpe in that area, or some form of new concept ride shown this year.

Either way Ripsaw deserves a successor flat ride to replace it.
“A surprise to be sure, but a welcome one”
Top

Please, no. No remix of the soundtrack. It's perfect the way it is. Atmospheric and fits the theme of the area very well. As for Nemmy herself, at the moment I think she's in a fine condition, however in the future, I too would like to see an overhaul so that the ride can be kept at the park, and yes I would love to see the return of the blood rivers!

I believe I'm correct in saying that the blood rivers were recoloured because the colourant leaked into the local water sources around Alton and Farley. However, if Alton are able to do anything, I'd also love to to see the return to coincide with the completion of the station repaint.
Top

I'm sure Alton could do something in terms with the water supply and sewage system around the area of Nemesis to allow the blood river to come back, however, I'd imagine it would cost a significant amount of money that they don't have and a lot of work done, so in my opinion it isn't worth the time or money - as good as it would be.
Top

Robert.W wrote:
They'll just have to wait till scientists invent a red dye that dosen't harm the environment if leaked into the water supply

Scientists: Hold up, the cure for cancer can wait - Alton Towers needs a new red dye, do you think we can get funding?
Top

Please no upgrades to Nemesis soon, It's fine as it is after the refurb it's got at least another 10-15 years before it'll start to grow old, and then they'll consider if it's worth the money to do a Hulk style refurb.
[Insert Signature Here]

Nemesis isn't even rough yet, I don't feel like there's a need to retrack it for a while now.
Reassess your modern lives and ignite your senses.

Excuse the picture quality but this is interesting. New show maybe? Mr Sanbrooke said it looked like some sort of rehearsal was going on. 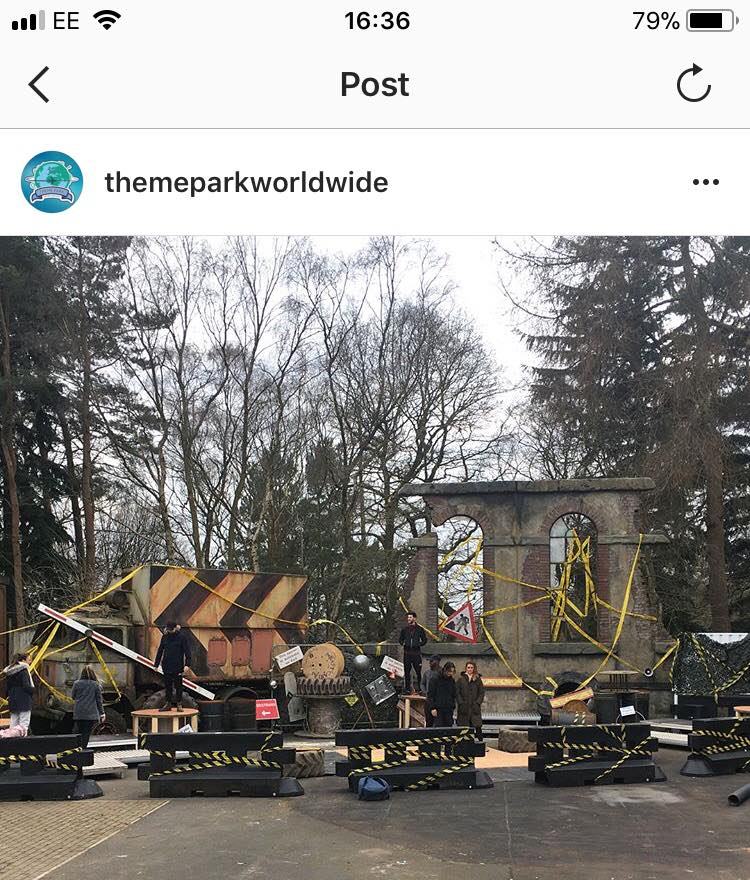 Interesting, definitely looks better than Forbidden Sweep whatever it actually is.
Reassess your modern lives and ignite your senses.

Some new live entertainment would be a great addition to the park and would work well in Forbidden Valley with the loss of two attractions.
SeaWorld has rescued over 35,000 animals in need![/i]
Top

I went in for Saturday and there were some actors near that stage thing. I only remember that one was a woman carrying a golf club and one was a man with a bullet chain ( I dont know what they are called) over his shoulder. I think this is most likely a show.
Top

It will be a drance show. Some photos of the actors can be found here, along with further discussions.

Someone has posted a photo on Instagram of what they claim is a new pivot for The Blade:

Slightly unexpected if true. Especially as wasn't it the motor that had a slight issue one Saturday in October?

I'd feel happier if we could get visual proof that Black Buccaneer is still at Chessington though...

It’s good to see they are spending money on maintaining such an old ride instead of removing it. (Blade and Gallopers are last two rides which were at the parks opening if I’m correct?)

I've been pretty disappointed this closed season with lack of TLC updates.

I was worried after Wicker Man and the boost in attendance this would happen. It's still good they're cleaning track and maybe performing maintenance on The Blade.
Top
Post Reply

Users browsing this forum: No registered users and 132 guests
×