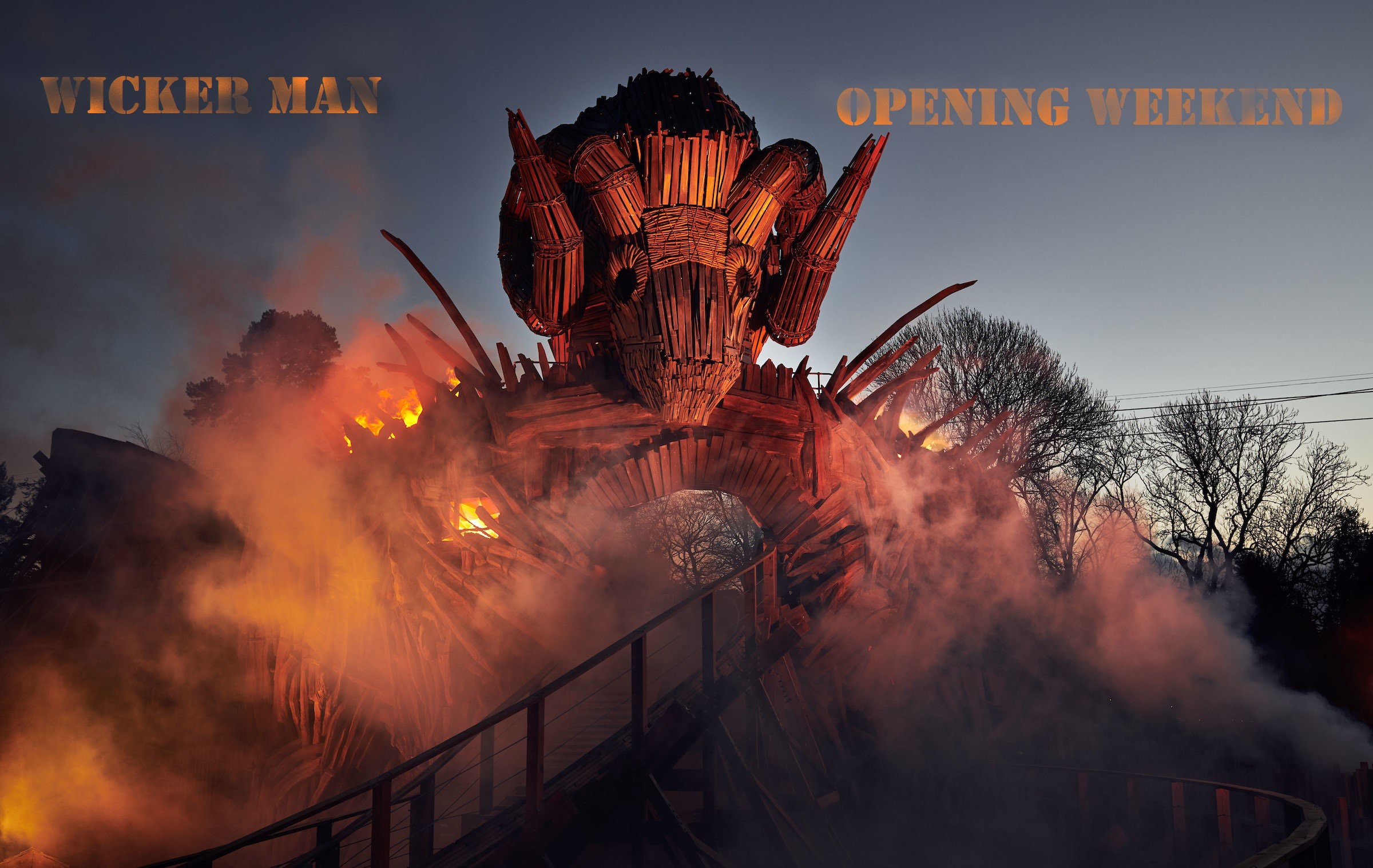 Wicker Man, possibly one of Alton Tower’s worst kept secrets. Dubbed Secret Weapon 8, Wicker Man is the UK’s first wooden roller coaster in 21 years and to be constructed by GCI (Great Coasters International). This 16 million pound investment is the Resort’s new thrill attraction for the 2018 Season and newest Rollercoaster since 2013’s The Smiler. On April 23rd, plans were submitted for the Wicker Man ride to be constructed on the then current site of the Flume, bringing its 34 year stay at the park to end where in 2015 it would close. The ride was demolished for the 2017 season where throughout the season the site would undergo the construction of the ride with the theming, structure and majority of the track being completed before the end of that year. During this season, its name and logo was leaked to the public but then eventually confirmed on January 8th where it was dubbed at the time “The World’s first roller coaster experience to fuse wood and fire”. As well as this, the ride was given the taglines “Ignite your senses” & “Find your freedom”. The ride has had many marketing tactics such as the 2017 maze “The Welcoming” being created; where thrill seekers ventured into the unknown world with “The Beornen”, a fictional group of people related to the ride, giving the ride some further lore for the setting. 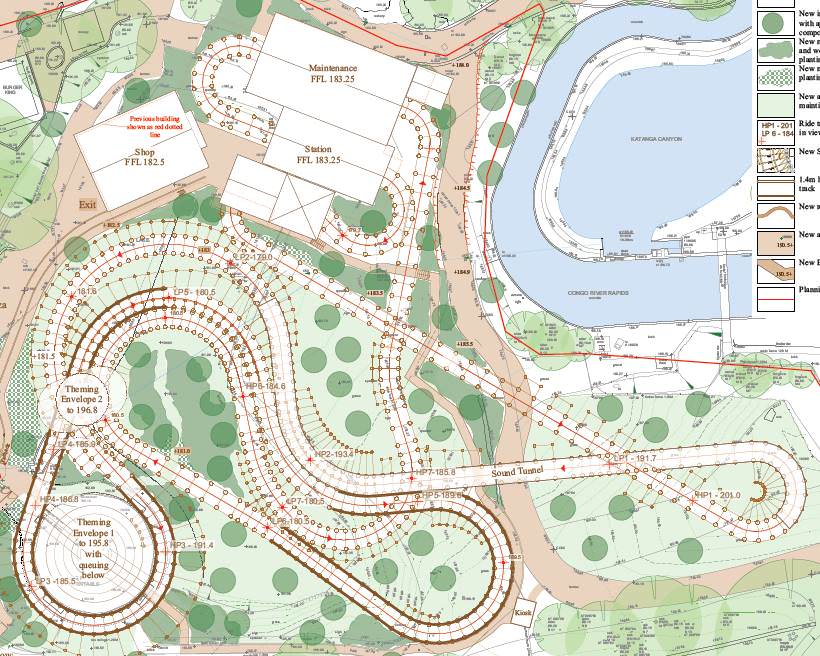 For me, Wicker Man when first announced wasn’t too exciting. I thought its layout looked bland and uninspiring. For 2017, my views on this ride changed on an increasing scale; having seen the progress made and transformation of the ride, my opinion was positive. For me going into 2018 I had high expectations for the ride, it would need to impress me on a visual aspect as well as an experience perspective. Having had my views changed in the space of a season, I was excited to experience Wicker Man which had promised to be an immersive experience with effects featured throughout. Although not the most intense or thrilling ride; the theming for this ride was one of the crucial draws for me as it always stood out as an interesting concept and as time passed and more information was released, it filled me with more hope.


3 weeks prior to the opening weekend, I asked some other members of the TTSP community their opinions on Wicker Man and what they expected of the ride. Below are their views and expectations before riding Wicker Man for the first time.


Dom: I think it will be a fun, highly themed experience and whilst it won’t be as thrilling as some of the other coasters at the park, it will be one of the most themed and most theatrical and I can’t wait to see it for myself.

Jack: SW8 has excited me since plans were released, of course it has, it's a wood coaster for Alton Towers. However since then I lost a lot of confidence in the ride, mainly during mid 2017 season. BUT, there is a but, since the name reveal, seeing the ride test on video and hearing it test in real life, I've gained a lot of hype for Wicker Man. Everything looks great now, and here's hoping opening day won't disappoint

Alicheesy: Watching the construction of the theming and coaster itself has made me really excited for SW8. It's the woodie we've been waiting for and I'm hoping it will be my favourite coaster on park. It may be known as a 'family' coaster due to the height restriction but I think it will still be thrilling and very enjoyable.

Capt. Barnacles: At the end of the 2017 Alton Towers season I was still hyped and very impressed by the as-known-then SW8. Since the name reveal of Wicker Man and various leaked images and testing videos, I'm anticipating a solid addition to the Alton Towers line up, nothing spectacular, but still definitely fun!

Morgan: I'm sceptical about the Wicker Man, I've been disappointed with previous Merlin projects, so I've been staying away from the hype. It'll be a fun ride, but nothing more than "fun". The layout doesn't look great, after the recent video of it testing it seems to have a nice amount of speed which is good. As for the theme, I wonder why it's a darker theme on a family ride. Hopefully the pre shows won't be spoon-feedy either. 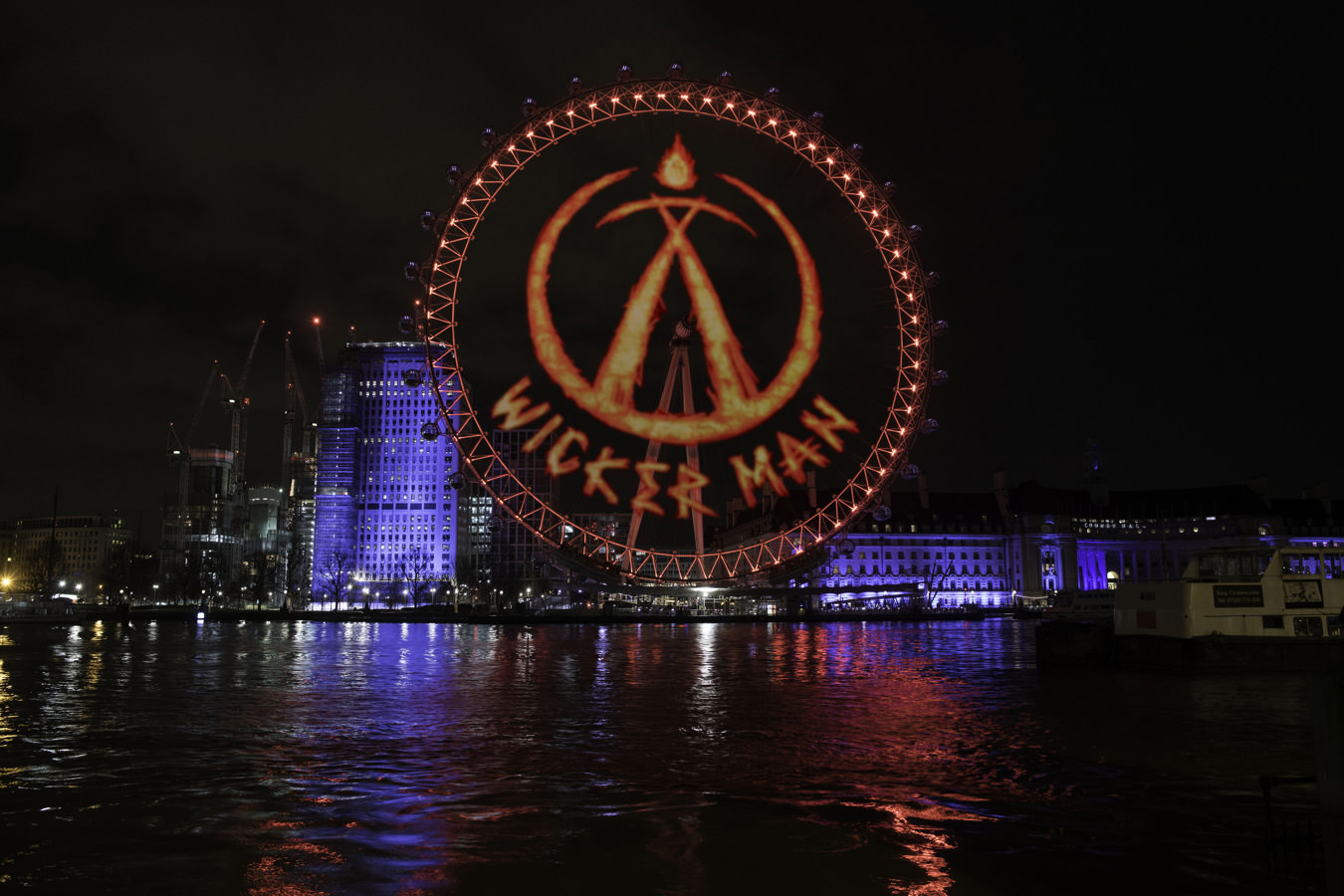 
Due to weather conditions, the original opening for Wicker Man was scheduled for the 17th of March but was moved to the 24th where it received its full opening ceremony. As well as this, the ride opened to the public on the 20th of March for the first time as part of a soft opening where it continued to operate throughout the week. I was unable to attend the opening on March 24th but was able to be at the resort on the original opening weekend to take a look at the ride itself and its shop, I attended the resort on the 25th for my first ride of Wicker Man. The plaza is pretty simple with no real theming until you get into the main queue, torches can be found around the edge of the ride area featuring real and fake fire providing a nice touch to the lighting. Included is a warning sign before entering the ride, The Beornen’s own personal threat to any riders daring to enter. It’s a clean ride plaza which provides some great views of the Structure itself and track, something which I approve of. The shop is extremely well themed, Merlin have done a great job of creating a shop complimenting the ride’s own aesthetic. In my own personal preference, this is on level with Derren Brown’s Ghost Train at Thorpe Park – both of which are truly incredible. The shop is full of wonderful souvenirs and collectables for any fan to get giddy over.

Upon joining the queue, you’ll be greeted with an outstanding amount of theming, from signs written the mysterious “runes language”, to festival-esque banners drooped around the queue. You do get a sense of walking into a different world whilst queuing, it’s a queue line which doesn’t feel as repetitive as other rides at the resort. You get some close encounters with the ride track, lift hill and even the Wicker Man itself. Before boarding you’ll be asked to “surrender” your belongings and experience the ride’s preshow. Whilst I shall not spoil what happens in said preshow, what I can say is it’s something truly special, something which feels appropriate  to any rider who is about to experience the ride. The station itself is again well themed and keeps with the storyline of the ride well. You’re sent to your gate where the ride hosts (suited and booted in their unique Wicker Man themed uniform) will secure you in place for the main event. 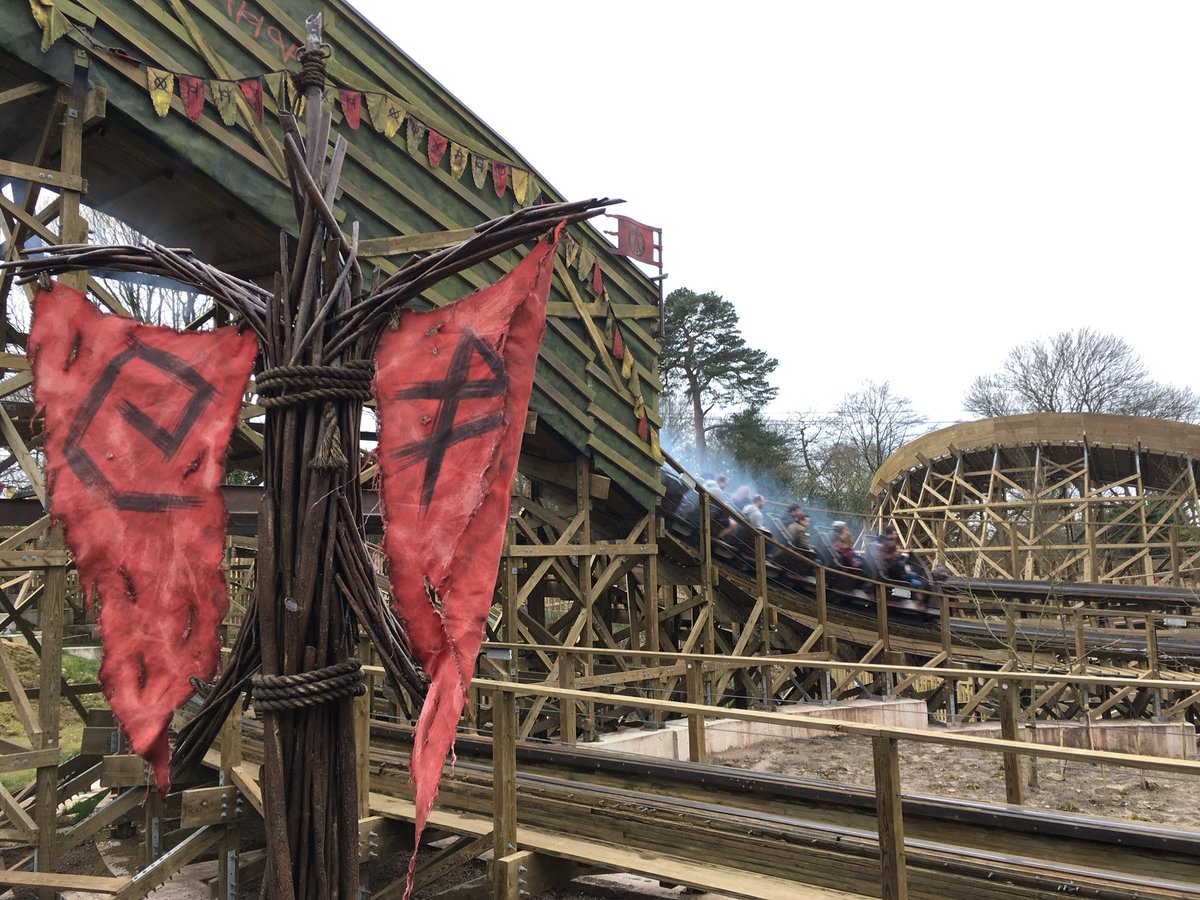 
So, after waiting and following the build-up for the UK’s first wooden rollercoaster in over 20 years, did Alton Towers impress me with their newest investment worth £16 million pounds?

Wicker Man may not be an extreme, white knuckle ride but it deserves the respect. They’ve created a thrilling rollercoaster combining ride effects with a twisting and turning layout to make a great ride. All this combined with the preshow and queue line experience makes for a truly unique attraction, something that hasn’t been seen since Hex. From entering the first sound tunnel, rushing through the theming structure that bursts alight with flames, it creates some real spine tingling moments. When you think it’s over, it kicks back offering more and more with each turn of the track. This ride on the surface doesn’t seem that exciting but it’s a whole new story whilst on board. Moving onto the negatives of the ride, on its official opening weekend it was plagued with numerous technical difficulties resulting in the ride being delayed for hours on end and several evacuations throughout the 2 days. Obviously this is nothing new for a brand new roller coaster but it still taints the ride’s overall look when looking back. With this, some of the mist effects featured in the structure appeared to be faulty, leaving some riders to be dripped on whilst riding; again something that doesn’t reflect well. I feel this ride is great when it works and is maintained, only time will tell how this latest attraction holds up. 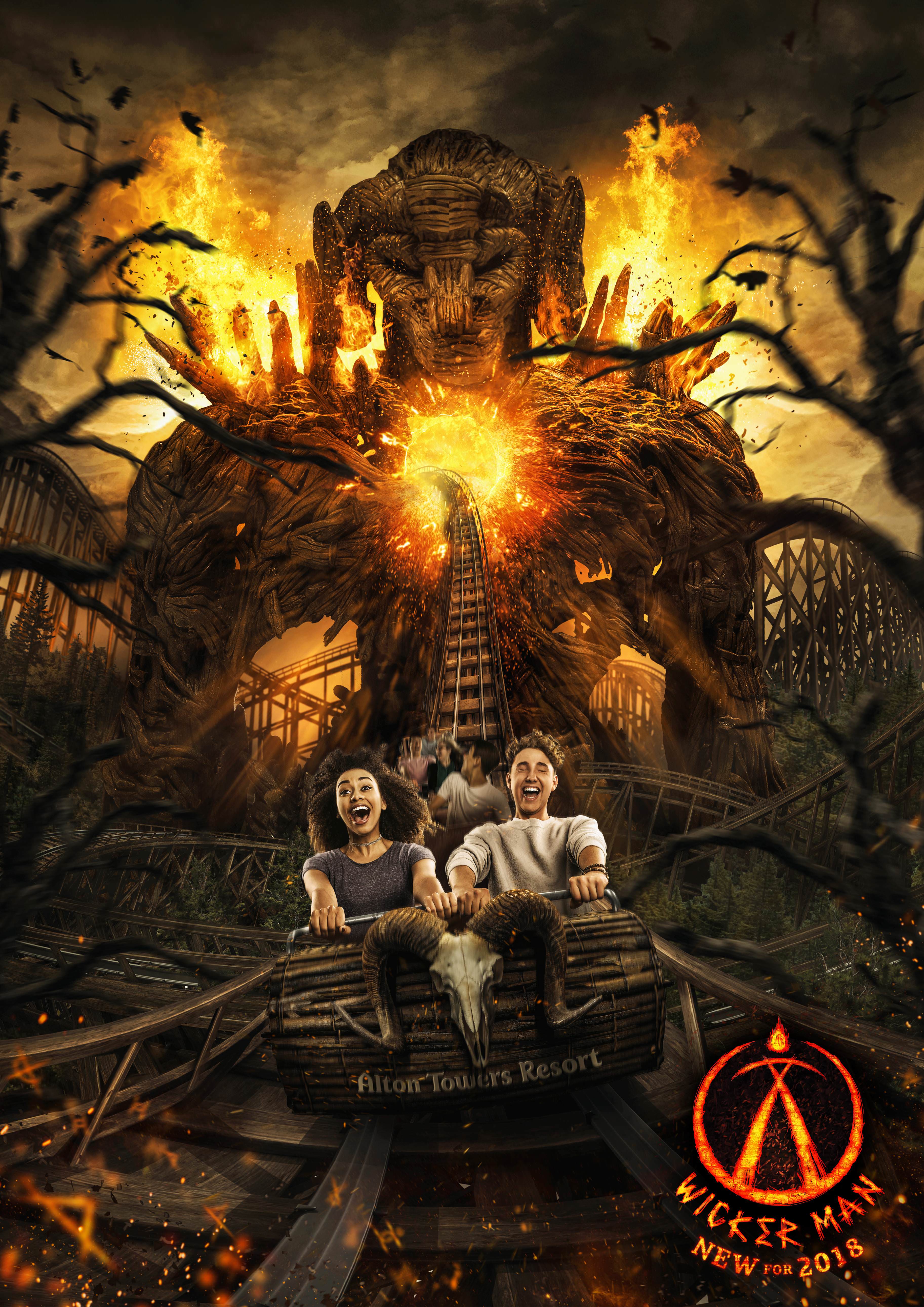 
As well as my own opinion, I gathered the views of a few of the lucky riders to have experienced Wicker Man.

Jack: It's not the best ride I've been on, but it's my favourite, the theming and ride just make it amazing. It's a sign of Alton Tower’s future I hope, to return to a totally themed experience.

Alex Partlett: Whilst Wicker Man's actual ride doesn't look anything special off ride, it packs a punch. It has plenty of airtime and a surprising amount of intensity, and is in my opinion the best ride at Alton Towers

Capt. Barnacles: Wicker Man is an experience I've waited 3 years for alongside a wide community. Seeing it grow has been an exciting journey and it culminated in a fantastic experience from start to finish. Alton's got a winner here!

NemesisRider: Wicker Man definitely surprised me - I was expecting an immersive theme surrounding a strong family oriented coaster, but I found both the theming and ride experience exceeded my expectations. Surprisingly intense, detailed and well rounded, Wicker Man is easily one of the best additions to the park in years


Whilst Alton Towers have certainly created a new attraction to bridge the gap for their family market, some may feel it was a safe decision in terms of on ride experience. Aside from this, Merlin Magic Making (the team behind the story and theming for this ride) have created a unique experience which many will feel justifies the attraction and brings a unique theme to the park. Personally, if the minor issues are addressed and rectified and the ride is maintained to a respective level, this attraction can stand as a strong attraction for many years to come at the resort. 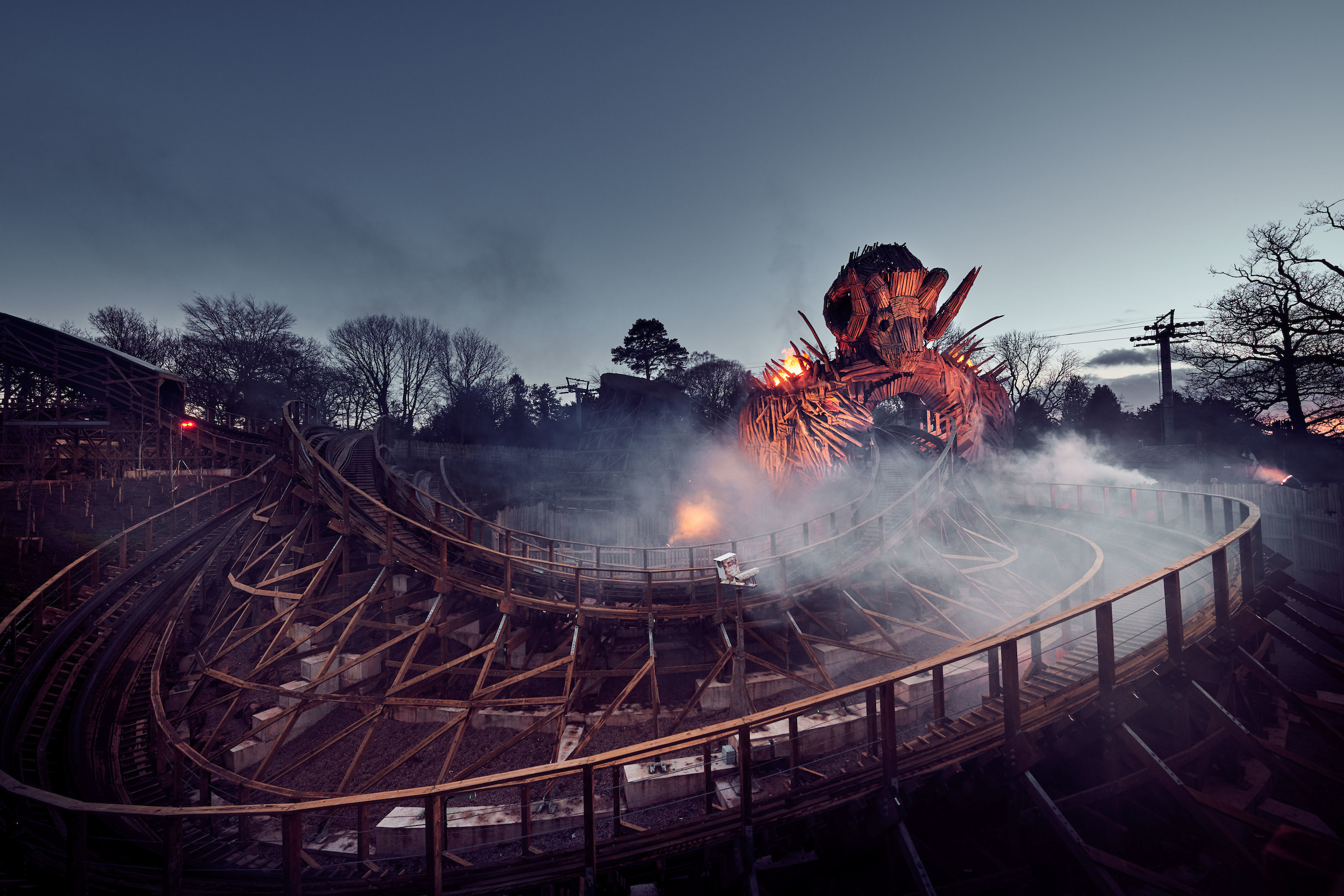 Final promotional shot of the ride released by Alton Towers

Massive thank you to everyone featured in this article! I wouldn't have been able to create this without your opinions and views on this ride!

I'm the boy with the bubbles
Top
Post Reply