500 non-mainstream places to go in Britain

A beautiful place with some really cracking views of the surrounding area. Also a nice place for rock climbing. :P

34. Alton towers
Well, it is a resort,what i am talking about is the hotels, golf, mansion and waterpark

35. Kenilworth castle
The bestruined castle in the world.

TOPIC RESCUE ON!!
"I am like fire, and ice, and rage.
I\'m like the night, and the storm, and the heart of the sun.
I\'m is ancient and forever, he burns at the centre of time, and he can see the turn of the Universe."
Nemesis
Top

St. Michael's Mount, Cornwall. It's quite cool going over to the Mount, and Cornwall is just a fantastic place anyway.

Tenby's a beautiful little village tucked away in Pembrokeshire, SW Wales. Has an interesting history with tales about the Norman Conquest and the Civil War, with some remnants still existing today in the shape of like, old walls and monuments and stuff. :P

Also, while you're there, sneak in a visit to Oakwood, it's about 10 miles away? :P

I think we're on 39.
Dartmoor, truly inspring national park, with amazing walks and places to discover if you dare to venture beyond the tourist honeyjar that is Hay Tor. Above is Grimspound, an ancient settlement that really makes your mind wonder in amazement at what may have gone on here. 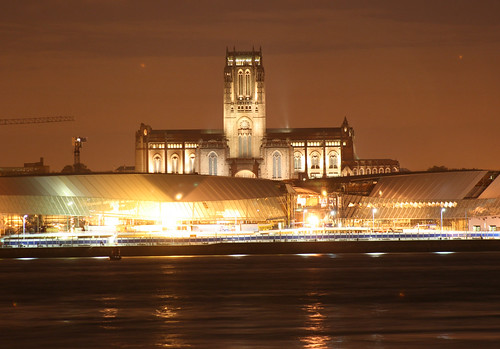 Home to the heaviest ring of bells in the world (the tenor weighs 4.5 tonnes) the church being very very beautiful with architecture that will stun, its very peaceful.

Over 30 stores across Hertfordshire with friendly staff, delicious cakes and coffee and fresh food to go or eat in all day, every day!

Even though I don't work there anymore - Waitrose is too maintstream :P.

41. Cheddar Gorge - home of the cheese and also Wookey Hole and Caves
Top

One of the reasons why I bloody love living up here :D High Force, although not the highest waterfall in the UK, it's certainly one of the most impressive. One the way back, I'd suggest wandering over Wynch Bridge too, a nice suspension bridge that you can bounce along. Although it comes with a warning that only one person should cross at a time :P 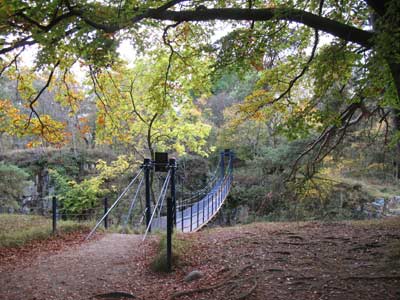 43. - Lindisfarne
A gorgeous, gorgeous island off the north east coast. Accessible via a causeway, there's a fantastic castle along with some nice walks around the island. 44. - Goathland
Ok, now some people might not recognise it's proper name. But, Goathland is otherwise known by it's showbiz name Aidensfield. yup, this is the place where they film Heartbeat. Just a short drive from Whitby, and on the way to Flamingland for moi, it's a nice quick visit if you're in the area, but watch out for the sheep as they roam freely around there :P. As well as being used for Heartbeat, Goathland Station is also known as Hogsmeade Station from Harry Potter :D

I got another one... again, cornish :P btw, I love Goonhilly :D haven't been since the nineties though... :(

what number? ooh 45. slowly getting there!

Land's End is one of the most popular outdoor attractions in Cornwall. Situated on the westerly point of mainland Britain, it is surrounded by spectacular views of the Atlantic Ocean.

I mean, come on, it's so amazingly beautiful :)

now one closer to home...

Me local Castle ^_^ it's packed with so many amazing exhibits, and some really quite fun activities, while there is so much history around you! simply amazing :D I know it's a museum, but it's truly fantastic :D not only that, but our Chapelfield centre is so close, by, with loads of big brand shops, you can have a good browse in their too!

47: Now, not Britain, it's in Ireland, but close enough for me to feel it counts! Newgrange is such an amazing place, an ancient burial mound, with a tunnel passing right into the central chamber, which contains some of the most amazing stone etchings in the world, with designs so accurate experts have struggled to work out how they were created. The site is amazing at all times of the year, but there is one day every year where Newgrange becomes one of the most amazing experiences I have ever witnessed in my whole life, The Winter Solstice.

Every year a group of people are selected through a lottery, and are allowed entrance to the tomb on the day of the winter solstice. At sunrise, a series of stone openings let one shaft of sunlight through to the tomb, the only light ever to reach the central chamber in the year, and lights each one of the burial chambers. This beam of light is blinding in a chamber that is pitch black 364 days of the year, and the feeling as the light passes over the intricate spirals and symbols on the wall is euphoric. The beam lasts for 17 minutes, but doesn't fade away, it's sharply cut off by a beam covering the opening, and the whole tomb is plunged again into darkness.....you're in the dark, surrounded by hundreds of tombs....intense isn't the word!
Top The Royal Armouries is a large museum in Leeds, showcasing all types of weapons, clothing, wars, battles, stories. Infact, every war you will have ever heard of, or anything to do with crime or violence throughout history, you are sure to find in this one place!

Great day out, would recommend it to anyone. Such a lovely place to go. Pugneys is just a large lake on the out-skirts of Wakefield West Yorkshire. The park around the lake is great for dog walkers, walkers, chilling out and genrally relaxing. You can hire a boat if you want to venture out on to the lake, or perhaps you just want to sit at the side and chill.

I find that if i'm bored, or maybe feeling a bit ****, Pugneys is just a great place to go. It's just a good place of solitude. Great day out for the whole family! I have been here a couple of times in the past, and it is really intersting. They have a museum showcasing all the ages of the coal mining history, from the very start to modern day mining. You can get on the underground tours, but the tickets do go fast (as it is a free attraction), so get there early (before 12 midday) otherwise you might not get a ticket for the underground tour.

I'm guessing week days wouldn't be too bad, but holiday time and weekends are packed. If ever there was a brilliant beach to visit, this would easily be it.

Just a 1 mile walk away from Lands end (Via a walk accross the cliff top) The cove can be simply smashing when at sunset and just as good during the day.

This for me is easily my favourite place in all of Plymouth.

One of the largest aquariums in all of Britian, NMA offers so much and an entire day can quite easily be spent here.

As well as having the one of the largest tanks in England, The tank above (Pictured) uses the largest single pane of glass in all of Europe! In fact, a couple of the tanks are so large that you cant actually see the opposite side of the tank. Simply an amazing visit.

53. Devizes Museum
Well, my dad is the director of it, but with a whole range of exhibits ranging from nearby Stonehenge, Avebury, Silbury hill, and much more, it really is a class institution.
Sorry for the advertising [-o<
"I am like fire, and ice, and rage.

I\'m like the night, and the storm, and the heart of the sun.

I\'m is ancient and forever, he burns at the centre of time, and he can see the turn of the Universe." A really good experience for the whole family, taking a tram to the top of the Great Orme, with fantastic views over the ocean and Llandudno. There's also a great place up there where for decades people have used rocks to make their name on a steep hill, visable from the cafe at the summit.....lush
Top

Amazing place, very popular and totally free. Plus you are allowed to climb on anything and your safety is put into your own hands ;) 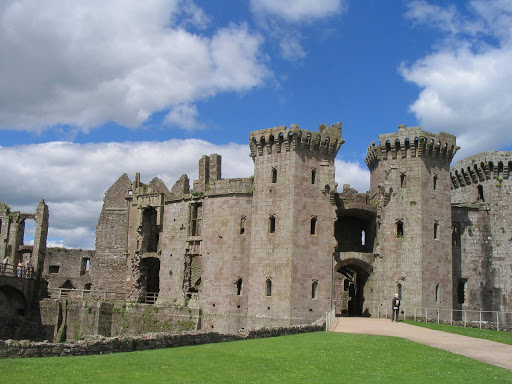 Ressurecting the topic again so here's mine

A great zoo, and one of Britain's biggest. The only downside is it is very hilly & steep, and is hard to get around if you're disbled. :)
58.

A great little museum, with lots of hands-on exhibits. It's not been quite as good lately due to the closure of the IMAX Theretere & the Wild-Walk. :)
Top

The only reason anyone in their right mind should go to Hull, Easily the best aquarium in the country

Just a really underated city. It just has much more charm that other cathedral cities such as York and Canterbury

An amazing array of places to visit, attractions and stunning scenery. It's also the 'Gateway to Snowdonia'.

Examples of what's on offer:

Portmeirion - set of the 1960s Cult Sci-fi series The Prisoner, designed and constructed by Sir Clough Williams-Ellis in the early-to-mid 20th century:

Rheilffordd-Ffestiniog Heritage Railway The 'oldest independent railway company in the world' - this railway takes you on a 13-and-a-half mile journey from the coastal town of Porthmadog to the slate-mining town of Blaenau-Ffestiniog, through some breathtakingly beautiful countryside as the railway snakes its way through areas completely inaccessible by road and cut-off from the rigours of modern life. 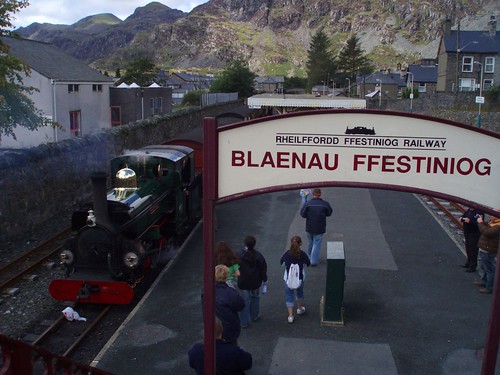 
Harlech Castle An imposing 13th Century castle, built by Edward I (of Braveheart fame!) during his conquest of Wales. This fortress was considered unassailable until taken by Owain Glyndŵr in 1404 - and even then it took a long siege to finally starve the occupants into surrender. In the Wars of the Roses it was the last Lancastrian stronghold to finally surrender to Yorkist rule after the battle of Towton.

Cricieth A beautiful coastal village overlooked by another castle built this time by a welsh prince, Llywelyn ap Iorwerth, in 1320. It includes a visitor attraction with details of the Welsh history of the area, including the journey of the cleric, Gerald of Wales in his quest to convert the Welsh to Christianity (including fantastic Asterix-esque cartoon of the events!). It also has a lovely (small) high street with independent shops, and plenty of places to stay, two beautiful beaches with interesting geological cliffs and features.

And there's a lot more, too, but no time or room to include it all! Highly recommended, though!
Top
Locked

Users browsing this forum: No registered users and 75 guests
×