hi people, i wanted to make this topic to discuss political beliefs

I will start with my self. as i am more left wing people can think i am not serious. But i am. if this was more left it would make the UK a better place as it would make people more equal

I really can't stand this random hatred for Eastern Europeans working in the UK. They are a convenient scapegoat for British laziness.

I am right wing. Should support the Tories but these guys are in my opinion far more interesting...

Also i should support labour but i dont. they are rubbish tbh
Top

Labour are more right-wing than the Tories these days!

I'm a democratic socialist. So very left-wing, but with all the communist/revolution/dictator bit. But I believe in equality, and closing the gap between the rich and the poor.

I would say I am a labour man, but I am not a fan of Ed Miliband.

I wish David had won

Whilst being a member of the labour party, I would say I swing more towards Sam's beliefs than the right-wing labour. Sorry Ed, but Dan is right, your brother should be leader
Top

I am considerably liberal, with many very left wing views, but I take an extremely hard line to crime and punishment for repeat offenders.

I don't align myself to any political party (any more), but I voted Liberal Democrat last time.
Top

I really don't know where I stand.

On the one hand, I am very left wing. I think that the chasing of profit is a bad way to run everything because, when can you ever have enough profit? I think that all of the job cuts are not because the companies are going under but because the profits are falling and shareholders just want profit, they don't really care about the companies.

Ideally, I would have everything that is intrinsically linked to a persons' human rights nationalised. Power, raw materials, water, communications (to an extent, that's a tricky one) and transport. These things should be run as services. Yes, you still have to pay but the prices could be far more reasonable as they're not run for profit but obviously maintainence and progression of technologies needs to factored in to the pricing. Everything else, luxury items, keep capitalism. It's unfair, sure, but it's the best we've got at the moment. On non-essentials, there needs to be capitalism and markets. Why would you ever make doughnuts under a centralised economy? You couldn't ever justify making most of the things we take for granted as available under a centralised, demand-based, economy. Just have enough things nationalised so that the essentials can never be truly lost or restricted by those without morals who chase profits.

But there is so much more. Education, war, social issues, crime...it's pretty impossible to have an opinion on everything and it's all very fruitless.

I just want to get enough money to go and live in Maui and swim in the crystal clear water and chill out behind an awesome waterfall in a lagoon of some description.

I have to say this. Labour brought this on to us (the economy wise) if labour had been sensible with the money it wouldnt be so bad.

Still at the moment even though i am very left (Not dictatorship) but nothing appeals to me at the moment party wise
Last edited by Poison Tom 96 on Wed Feb 01, 2012 8:52 pm, edited 1 time in total.
Top

It wouldn't have been 'so' bad, perhaps, but this isn't just us. Other countries are in an even worse state.

Blame the banks. Not sure how the Tories 'appeal' - what they're doing to the education sector alone is deeply worrying.

Ooops, I meant to say WITHOUT all the communist/revolution/dictator bit.

I don't associate myself with any political party but I'm almost completely anti-Tory.
Top

AstwoDan wrote:
I am not a fan of Ed Miliband.

I wish David had won

Satch wrote:
Whilst being a member of the labour party, I would say I swing more towards Sam's beliefs than the right-wing labour. Sorry Ed, but Dan is right, your brother should be leader

If you two think that Labour would have done anything other than track to the right with DM, then you're sorely mistaken.

Anyway, as a bit of a way of making this topic a bit more demonstrative, why not have a go at the Political Compass (http://www.politicalcompass.org)?

Here's me...progressively getting more....erm..anarchist by the year it would seem!!

**I should add, I answered the question giving free rein to my pie-in-the-sky idealism. When it comes to politics, I do temd to be a little bit more pragmatic and willing to compromise. Still a raving lefty though.**

And as a bit of a reference, here's what certain famous political leaders may have scored:

There's also a great page about the position of political parties in the UK based on their recent manifestos as well as how the parties have shifted position over time.

If you need any more of a damning indictment of the Labour Party today, it's here. http://www.politicalcompass.org/ukparties2010
Last edited by Simon on Wed Feb 01, 2012 8:15 pm, edited 1 time in total.
Top 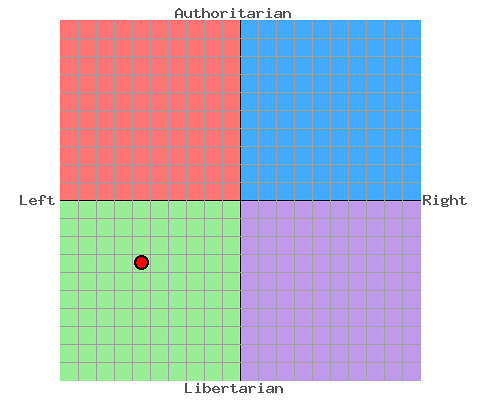 
is where i stand Anarcho-Communist and proud

Everyone so far seems Anarcho-communist

Pretty good, I'm happy. Looking at the comparison chart on the site, being closest to Nelson Mandela and Gandhi can't really be a bad thing. No-one else on there is anyone I would consider a good person.

Users browsing this forum: No registered users and 53 guests