Tom G wrote:
A civil union provides a couple with all of the same rights, privileges and benefits that a marriage in a church brings.

Because some gay couples want it to be recognised as a marriage and on the other foot, some straight couples want to have civil partnerships.
1. Expedition Everest 2. Hollywood Tower of Terror 3.Superman De Acero 4. Katun and Nemesis 6. OzIris 7. Blue Fire 8. Black Mamba 9. Manta 10. Oblivion

Tom G wrote:
Marriage in this country has its roots from religious acknowledgment/endorsement/whatever.

A civil union provides a couple with all of the same rights, privileges and benefits that a marriage in a church brings.

Your argument is basically the same as saying it's fine that black people and white people had to use different, but identical, drinking fountains in pre-civil rights America. As long as the actual outcome is exactly the same, it doesn't matter if they're different ceremonies with different names... right?

Anyway I've handed out the first batch of userbars! Let's turn TTF into a sea of rainbows! Any more for any more?

Gay people are aloud to be religious are they not?

If so surely if they wish to have a religious ceremony to celebrate there love...

And even if they are not religious... Does that mean atheists are now not aloud to get married...
Top

Done, sending a PM as I speak, I may be straight, but love is an everlasting thing, being the same sex should not hinder such things as marriage if the devotion to each other is there.
Top

There's no argument here, I was basically asking questions. It's my understanding that the bible condemns homosexuality, so I was intrigued as to why people would want to be aligned with such a facade - but then again, like many things, the bible is open to different interpretations.

I would be happier if marriage was STRICTLY a religious institution, and straight couples could also enter a civil partnership. However, there are religious homosexuals, and they should be entitled to the sanctity of marriage the same as heterosexual couples.

Note, the bible does not condemn homosexuality. It is the interpretation of many Christian religions since that have made it seem that way
Top

Sadly, it does: "A man shall not lie with a male as one does with a woman. It is an abomination" - Leviticus 18:22

No religion invented marriage, so why should it be a strictly religious institution or be dictated by religion?
Top

Blaze wrote:
Sadly, it does: "A man shall not lie with a male as one does with a woman. It is an abomination" - Leviticus 18:22

No religion invented marriage, so why should it be a strictly religious institution or be dictated by religion?

To that you could argue that the Bible has become outdated in some of its points. Are slavery and sexism right? They are both in the Bible.

Anyway this is a bit off topic. Let's just allow gays, who wan't it, a religious marriage, or let straights have a CP- we don't have to argue about the specifics.
Top

How is what The Bible says even relevant? Chances are, it's a book about a story which is nearly entirely fictional.
Top

I'm fairly certain, although don't ask me to cite a source, that the 'it's an abomination' line has been adds in later texts. Plus it's only Leviticus that mentions it, and there are theories that the book was written following the famine and subsequent population crisis, to urge people to have sex for purely procreation purposes.

As for strictly religious, marriage does have its origins in religion, as it was declaring love and commitment in front of God(s). But that doesn't mean it should be the case now. By point was as a compromise, perhaps take marriage back to its religious routes, but allow homosexuals, whilst also making civil partnerships carry the same rights and be available for hetero an homo couples
Top

Sam, I did all this ages ago, can I have a banner thingy?

Even posted the link to the consultation on my Facebook back when it was first put online to get friends to fill it in!

Tom G wrote:
Marriage in this country has its roots from religious acknowledgment/endorsement/whatever.

A civil union provides a couple with all of the same rights, privileges and benefits that a marriage in a church brings.

That's why civil marriage was created for non-religious heterosexual couples. I want gay couples' unions to be recognised as civil marriages.

Irrespective of whether civil partnerships are equal to civil marriages in the eyes of the law (which they're not due to them not having the same annullment options), the fact they're called different names is troubling.

Google "separate but equal" to see how the same logic you're using was applied to stop racial equality in America.

New userbars have been sent out!

Thought this would be Appropriate for the topic: 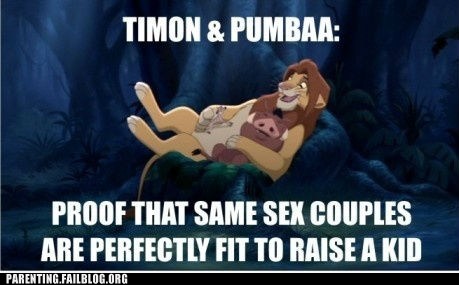 See, even 2 cartoon characters of the same sex can raise someone perfectly fine

Couldn't agree more with this. I'm 100% straight but I just find it ridiculous that a drunken chav can get some girl pregnant, marry her and spend the rest of his life beating her up - yet two intelligent and caring individuals who have been together for years and years can't get that piece of paper to certify their love. It astounds me.
Keep on whistlin', folks.

Wow guys! I'm getting a steady trickle of PMs every day asking for banners, keep them coming!

I'm thinking of how to move our efforts up a gear.

The MP for Alton Towers is a Conservative who entered parliament at the last election, Karen Bradley.

According to the Coalition for Equal Marriage's list, she has not indicated either way whether she will vote for or against equal marriage. This is probably because she's undecided yet.

My idea: we gather as many names as possible for a TTF petition, and e-mail it to her, under the banner of "Alton Towers Fans for Equality!" or something like that. It'd be awesome to send a message to her showing that as a community, we support LGBT rights! Thoughts?

I think it's a good idea, and on top of that people could write to their own MP's using the following link: http://www.writetothem.com/

AKA the vocal minority.
Top

My home MP, Stephen Gilbert, has already declared his support for the Coalition for Equal Marriage, and has signed the petition. Seeing as he is an openly gay MP, this comes as no surprise to me at all. George Eustice, my uni MP (as in the MP for the constituency where my uni is located) has not declared whether or not he will yet, so I think I may write to him asking for his support on this.

I thought that all this year, my uni MP was Sarah Newton, as I'm right next door to Falmouth - her constituency - yet I'm in Camborne & Redruth! Weird!

I believe these videos by the VlogBrothers, aka John and Hank Green, perfectly support marriage throughout every sexual orientation and are certainly ones for people to watch. They bring up brilliant points about the way marriage works, what counts, what doesn't make sense and so hats off to them.

I did this a couple of days ago but forgot to ask for a banner, could I have one please?