Did you ever think they could pull it off? - This ride has been around a bit in Germany - But has just been re-themed. And if I say so looks very impressive!

Still cant get over this is crap-flat-ride-manufactuer-zamperla!

What, so Zamperla make a Move It now?
I've never managed to get on the KMG version, but I'd love to given half a chance!
Top

Its actually 13yrs old believe it or not. But got its make over this month.

The closest I've been to a Move It is the Stargate, or possibly the thing at South End. I know it's technicly a Move It, but It just seems to 'kiddy' for me. I like to think the larger models are more hardcore. Hopefully I'll find out one day. [-o<
Top

Dont forget there still is a Move It 32 in this country - but for some reason its been packed up in the yard for a year and hasnt done any fairs.

The closest I've been to a Move It is the Stargate, or possibly the thing at South End. I know it's technicly a Move It, but It just seems to 'kiddy' for me. I like to think the larger models are more hardcore. Hopefully I'll find out one day. [-o<

Don't mention that ride, it was spawned from the very depths of fair ground hell sent up to bring an obscene amount of G and kill my remaining few brain cells. :dizzy: :dizzy:

Stargate is a very good ride but it doesn't match Move It 32 for ride experience. Much more comfy and looks better than stargate. Its sad news to hear that Move It 32 is not out on the circuit anymore, what happened its always been a popular ride?

Would love to ride the zamperla version if it ever came into england.
ThrillJunkieUK
Top

I went on a Move It at Goose Fair a few years back expecting amazing things from the reviews I've heard and was frankly disappointed. The upside down bits hurt and the rest had hardly any forces at all for me.

Still, they LOOK like they should be awesome in theory and in real life so I'd love to give this one a try if it comes round my way. Maybe the KMG was just running on a crap setting...
Top

The Move It 32 is usually on manual as with most travelling rides. Strange about it being a bad ride though Sam.

I thought it was amazing when I rode it at Dorset Steam Fair. 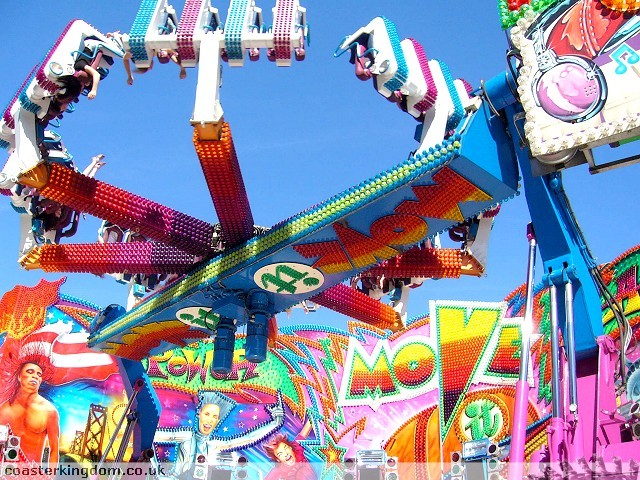 Don't mention that ride, it was spawned from the very depths of fair ground hell sent up to bring an obscene amount of G and kill my remaining few brain cells. :dizzy: :dizzy:

LOL. The Ride That Shall Not Be Named is an endurance test, I'll give you that! I think I went on that before I first went on Rameses Revenge. My mate convinced me it wasn't that bad :lol:

If only the hight-adjusting seats worked it would probably be much more comfy.

I've become quite obsessed with SG over the years. It always makes an apearance at Pinner Fair (my 'local'). I've even built a model out of Lego! It doesn't work, but it looks cool and can fold up onto it's trailer. It's not quite finished yet... still need a few more bits.

Anyway, back on topic: even if they hurt, Move Its have to be one of the best looking rides around.
Top

What does a Stargate look like? I decided to mount this abomination at Tunstall fair a few years back, it was akin to a MI32 but with a floor, and ridiculous harnesses with only one arm....is that it? If so it must be banished!
Top

Sounds like you went on a Superstar though Ryan..

I remember doing Stargate at Leeds fest half cut - NEVER again! That includes sober or hammered!

Loving the paintwork on that ride though Mark, absolutely awesome stuff :D
Top

I remember that ryan that thing was awful. I think ive been on the ride in the 2nd picture as well. Thunderbolt and Flambards no?

Yeah, Thunderbolt at Flambards is a Superstar and is made by NA Super rides, who are actually a brit firm IIRC :o

I must say though, that machine originally posted does look fantastic, and i've heard its a good ride aswell, being German fairs i'm sure a good cycle is inevitable! Also, the Top Star Tour (40 seat Move it), is made by Soriani and Moser, not Zamperla. its the same thing I guess, bith are Italian and sadistic :lol:

I've not got the balls to try the UK stargate yet, or should I say I have got the balls to ride it! A stand up saddle affair with Shockwave inspired restraints? No thanks, just look at the bloody things:

Oh god, that picture of Stargate brings back some bad memories. Was at Godskitchen's Global Gathering in 2002 and although I hadn't been drinking much, I had consumed *cough* "other things". It seemed to go on forever and ever and I've never felt so bad on a ride lol. Didn't know what ride it was until I saw that picture and now I'm convinced it was that evil contraption. Never again.....(at least not when I'm in that state.)

:D Yes it was Stargate at Global Gathering
Top

You learn the hard way not to do that kind of thing before going on rides!

It was that Stargate at Tunstall, me and Ash went on it, I'm pretty sure the ride cycle was 300 days, I actually thought about dying, or at least killing myself!
Top
Post Reply