Anyone watching? I know this is only the 1st test and we're playing for the draw but blimey this is agonizing!
<3 Gashead\'s Mother <3
Top

I'm loving this. I thought Australia were going to win days ago, never thought it would come down to the last few minutes. A draw is a pretty good result.

Panesar is a genius!

I know time-wasting isn't very sporting but any other team would do exactly the same.

Fantastic finish, it looked like the match would be over before tea at one stage, well done Collinwood, Swann, Anderson and Panasar.
Top

Staggering to get a draw from that!

So the 2nd test has begun and England have again elected to bat first. No Monty (for Onions) or Harmo in the starting XI which is a bit annoying as I do like them, hopefully the bowlers will produce this test. Annoying that Onions is in rather than Harmo as the wicket favours him more.

Remember hearing that we haven't won at Lords in the Ashes in like, 75 years or something...oh dear.
<3 Gashead\'s Mother <3
Top

Well I'm personally glad Monty has been replaced with Onions, selectors have got to go for form and Monty had a bit of a mare at Cardiff and has struggled to find his form in recent weeks. Harmison is only starting to recapture some form so Onions seems a reasonable choice, but only time will tell I suppose.

Looking good at the moment *touches wood*, lets just hope that we don't pick up those stupid batting mistakes as we did in the 1st innings at Cardiff (a la Cook, Bopara, Pietersen, etc).
Top

Yeah we couldn't have got off to a better start really. On top of that, Johnson couldn't had bowled any worse could he?

Ponting's face was a picture, on your bike!
Top

Hopefully England will bat on for another hour this morning, stretching thier lead to around 600, leaving England 5 1/2 Sessions to bowl he Aussies out. Won't be easy, Australia proved that they can bat at the Cardiff Test making nearly 700. I just hope that the other bowlers support Anderson and Flintoff better, if they do they England should win.

Strauss declares overnight good decision IMO, we'll find out for sure over the next 2 days though!
Top

Good start by the England bowlers. 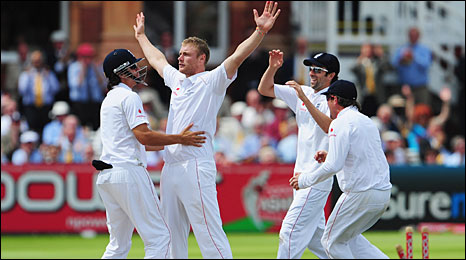 Boy are we going to miss him!
Top

Pietersen to miss rest of Ashes

England batsman Kevin Pietersen has been ruled out of the rest of the Ashes series against Australia after undergoing Achilles surgery. The England and Wales Cricket Board confirmed that the 29-year-old had an operation on Wednesday and will be out of action for up to six weeks.

You are kidding me? Kevin is awesome.

Watching now as the rain has finally stopped and play has been able to begin.

Can tell the pitch is very quick with Australia getting easy 4s. Good that Swann got that wicket before Katich got 50 and got too settled.

Well the less said about the 4th test the better. Flintoff is supposed to be fit for the final test so hopefully we'll know for sure in the next week or so :) I think we have to drop Bopara for this test as his confidence will be so low, I know dropping him won't help it, but it's such a big game.

I'd go with (in batting order)

Strauss - solid opener, questionable as captain though
Cook - done well throughout the series really
Ramprakash - his test average ain't great but he's on form having hit over 130 on Sunday
Bell - Best replacement for Pieterson tbh
Collingwood - Done alright this series, just collapsed at Headingly tbh
Flintoff - Must have, England not the same without him
Prior - Done well as wicky and proven he can bat
Swann - Only spinner who is consistent enough and he can bat unlike Monty
Broad - Earned his place at Headingly despite the teams crap performance
Anderson - Up there with Flintoff as a must have, lets hope he's properly fit this test
Onions - Done well since he came into the team at Lords. Can't bat but excellent bowler.

Really need the middle order to do miles better and bowlers to perform better. Australia no doubt have the better batsmen, and Clark has been outstanding all series for them tbh, but I think we have the better bowlers.
<3 Gashead\'s Mother <3
Top

I'd go with something like what you have got Danza, Bopara has been dismal.

I think the 4th test was a one off, England will definitely improve at the Oval.

Personally, I wouldn't have played Flintoff even if he was passed fit during the previous test, its much more important for him to be fit for the next test.

I'm still confident England can do it.

Users browsing this forum: No registered users and 70 guests