After looking back at the plans there's a lot more space in the SW7 building than I remember, so I've deleted my previous post saying the exact opposite!

I dont think it's a canopy, it's part of the labelled 'Station' building, the canopies have seperate labeling and dark lines all around them.

EDIT: It also appears on the side views as solid (see Elevation DD).
Top

Nemesis94 wrote:
Just a thought on the track front. Is it possible that Intamin and Gerstlauer track are fabricated by the same people? Hence how Euro-fighters have Intamin-like Ladder and Tri-track. Could this new track be at the fabricators suggestion, hence why it looks similar to the New Intamin mega/giga coaster track?

It is indeed possible that Intamin and Gerstlauer track is fabricated by the same people. This is certainly the case with Intamin and Zierer; hence why their tracks look identical.

Chris wrote:
Screamscape are reporting today that KumbaK are currently on property for "Ride System Improvements".

Oh dear, then the ride will never work properly again. Kumbak were responsible for the breaking system on The Grand National plaguing it with problems which still happen to date. they were also responsible for adding the breaks on Space Invader ruining the ride experience when it was open. In the words of a top Pleasure Beach official "Kumbak will never come back to the Pleasure Beach again"

They are rides breakers not improvers.

They made some mistakes, they've done a lot of good since.
Battlefield 4 Forum
Top

Chris wrote:
Screamscape are reporting today that KumbaK are currently on property for "Ride System Improvements".

Oh dear, then the ride will never work properly again. Kumbak were responsible for the breaking system on The Grand National plaguing it with problems which still happen to date. they were also responsible for adding the breaks on Space Invader ruining the ride experience when it was open. In the words of a top Pleasure Beach official "Kumbak will never come back to the Pleasure Beach again"

They are rides breakers not improvers.

They made some mistakes, they've done a lot of good since.

Do tell us then?

They made a right hash of the new trains on Efteling's Python, which are being replaced again after only 6 years.
Top

The sentance im referring to is on page 3 of the below document.

There is a small section of the station building behind the maintenance shed that is in a different colour, it does appear to be solid on the "DD" image, however on the overhead image it is labelled as "Raised Platform". What could this be?

Worth noting aswell that the curved piece at the bottom left of the Station building is half the height of the rest of the building, and also the actual building is bigger in height than I thought. So nothing other than a turn on the track could go in here at a lower height. (The same level as the track exits the station to the lift hill). On the other hand it could always be dug slightly lower as "Sub Terra" is, the plans dont have to detail this (i dont think).

Or most of the building could just be queue line/pre show!!

edit:
It states on the 'station elevations' document that this is the case:
http://publicaccess.staffsmoorlands.gov.uk/upload/PublicAccess/stationelevations%20(37879).PDF
Last edited by Ryan. on Fri Jan 06, 2012 3:44 pm, edited 1 time in total.
Top

The curved single storey section of building is the retail and ride exit as far as I could see from the plans.
I'm guessing that the track will need to use the space to some degree to make the turn back towards the lift hill.
Top

People are just looking into it too much, but thats what people do! They read into it and just get confused, i believe this is a Gerstlauer and i can see why people will get confused, on the statement it showing how Saw has a beyond vertical drop and doesn't make much noise, just comparing the two rides
Im gonna sit back and wait till Alton kicks in its first little signs at the start or middle of the season, cannot wait for scarefest 2012!
Top

as I said yesterday, I am modelling the plans in Sketchup, station building is finished now and i thought a few pics might be in order.

the model is accurate to 0.2m 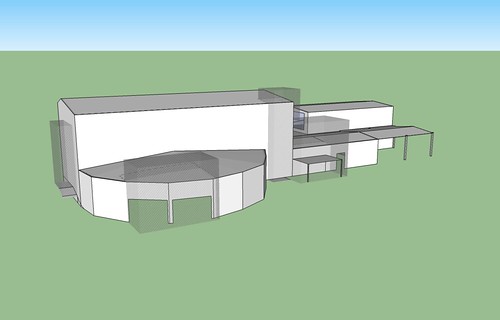 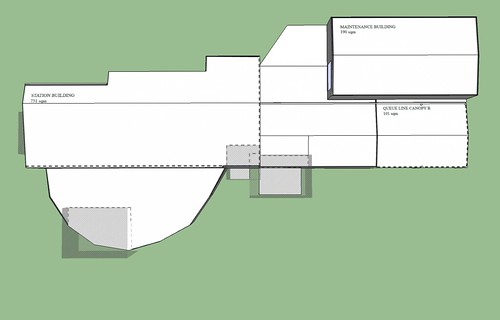 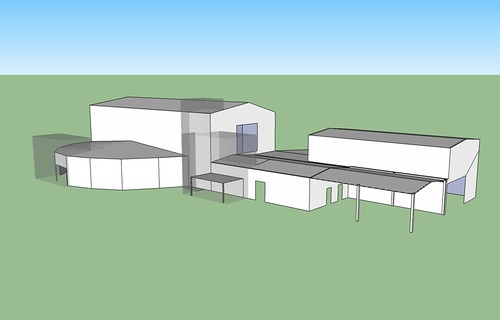 incidentally the return hole in the station is 4m wide which is definitely not enough for a 4 across train and the maintenance track hole is only 3.5m so i think we are looking at 2 across trains.

Oh so it does, i missed that one. Ahh well that pee's all over my theory.  There has to be a turnaround in there somewhere, it will be very tight if the scale of the track is correct.

There certainly does seem to be a opportunity for something to happen within the building. I'm hoping for some sort of mini dark-ride section, like what Blue Fire has.

I think a lot of the space will be taken up by the queue line though. I'd love a pre-show.

I've only ever ridden one X-Coaster, that being G-Force and to be quite honest I really don't understand all the hate towards them (Though I do see why people dislike them after RRR

) The seats are comfy and provide good support, the trains are reasonably smooth, and the restraints manage to feel secure whilst allowing plenty of freedom and movement to the upper body. The open design also makes them feel rather thrilling if you ask me

Whilst I'd like to see Gerstlauer take on this I wouldn't have anything against an X-Coaster using the current X-Car design.

As Rob said it's not that uncommon for coaster companies to use the same track fabricators as each other. I know Intamin and Zierer both use the same one sometimes (Hence why Verbolten looks so Intamin esque). It is possible that Gerst are using someone else for this project which could explain the major difference in track design.

) then it could be that we are seeing someone else building this. It would also explain why we can't see a beyond vertical drop on the ride layout, unless it's hidden indoors. I'd imagine that if that was the case though the building would go deeper into the ground than it looks. If it was to do that though wouldn't it need to be highlighted on the plans? Especially if the building is the thing which needs approval and extra permission.

Just my thoughts at the moment

Although the station / building is built over two levels it still seems very small to fit a station, queue line and fingers crossed pre-show

as well as a turnaround?

I do like the idea I've read over on TPR of putting the name "Staffordshire Knot" to the interlocking cobra roll and batwing.
Top

darrenhosker wrote:
So what is this "raised platform" thing then?

This is a guess, but access to the maintenance building. There's a proposed access road to the north of the platform out of guest sight.

This might sound like rubbish but could the track turn underneath itself and then invert so it is then the right way up again before leaving the building?

Looking at the Google Skethup designs I'm coming to the conclusion that nothing really happens in the station building.

There looks to be enough room for the ride car to turn right and descend to ground-level and that's it. Once there there may be a pre-show before a launch or even a launch with no pre-show.

It doesn't look like there's room for anything else as there needs to be enough room for people to exit the ride, load onto the ride and a ride operators' booth.

Another idea for the shuttles leaving the station - could they move forward onto a piece of track which slowly lowers while rotating 180* as a short of pre-show then carry on along the lower part of the building and out up the lift hill?

Users browsing this forum: No registered users and 21 guests
×