Frustrating that their biggest area and attraction won't be ready in time.

Will be gutted if I miss them on my visit in late Jan.

Some fantastic new photos of Motiongate.

Themeparkinsider have done a video tour of the park, which can be seen down below:
https://www.youtube.com/watch?v=UQugJci-BpQ

Some work is still being done on the park, including a few rides not being operational yet (Smurf's Village Express, Cloudy With a Chance of Meatballs, the Lionsgate area and the Dreamworks section) but are aiming to be open within the next few days.

A fifth theme park in Dubai Parks and Resorts is currently in the planning stages.

The CEO of Dubai Parks and Resorts said, “We have plans to add a fifth park. We are still working on it – it’s an amazing idea but it’s at the conceptual stage at the moment and once it’s the right time we will go out and expand it.”

If this fifth park does start construction, it will probably open after Six Flags Dubai (Q4 2019) which is the current focus of Dubai Parks and Resorts.

Reports are coming in that the Dreamworks section of the park is finally open! This area holds 2 coasters, Madagascar: Mad Pursuit (Infinity Coaster) and How to Train Your Dragon: Dragon Gliders (Mack Suspended Coaster). This leaves only the Lionsgate section to open.

All looking very good and can't wait to visit it on the 4th! (please please be good

Here are some POV's from Motiongate.

Drove past the site for the park yesterday, as you can see INCREDIBLE progress has been made on the park. 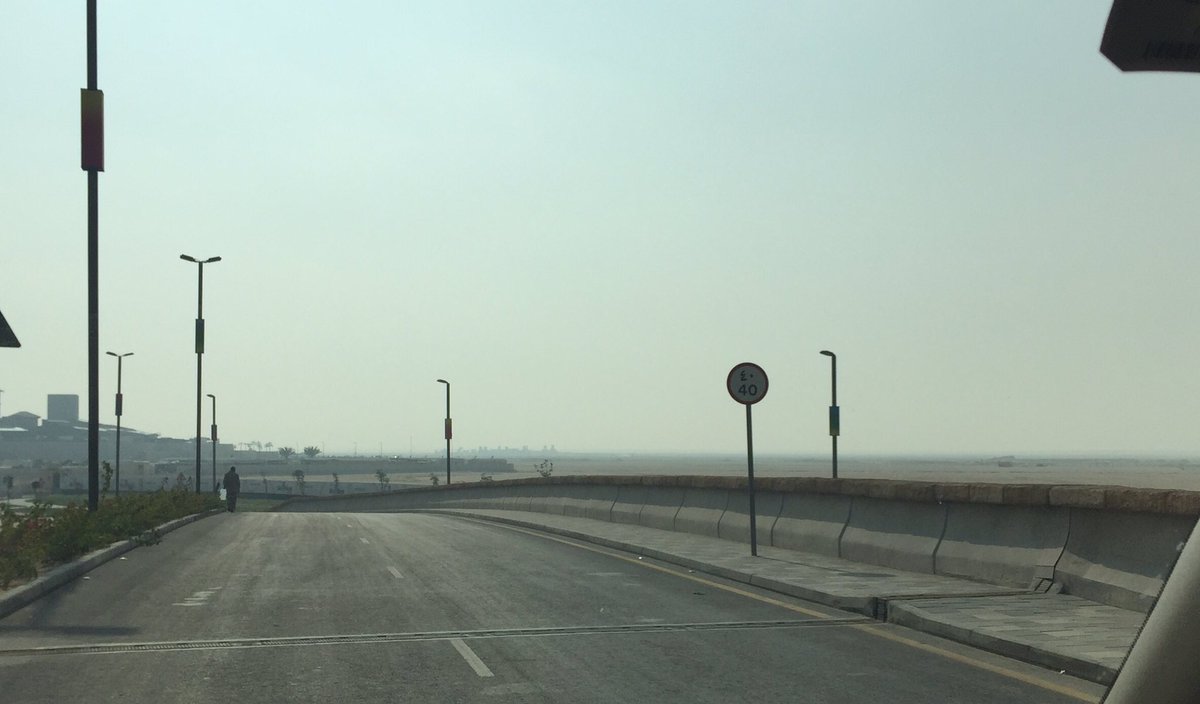 Dubai Union Properties have renewed plans to build a "motor racing themepark" in the Motor City part of Dubailand.

The company said that it is currently developing a feasibility study for the project, which was cancelled in 2013, used to be dubbed as "F1-X Dubailand" and was actually left 30% completed.

The masterplan will be revised however, making the original theme park designs smaller and more affordable while relocating half the land for mixed-use development.

In other news, one of the other palms, The Palm Deira, is making a comeback. The bottom of the Palm dubbed "Deira Island" has been reclaimed from the sea and will open a AED 500 million beach resort which will include a waterpark. Its set to open in 2020.

Dubai had its first themepark open in 1996, it was called "Wonderland" and was known for not being that good. The main stand out for the park was a Vekoma Roller Skater and that and the rest of the park closed in 2013, where it remains abandoned to this day.

Plans have been revealed for a Dhs1.8 billion ($490 million) redevelopment of Wonderland, which will feature amusement parks, apartments, shops, restaurants and a cultural centre. The reconstruction will start in the first few months of 2017 and is scheduled to take three years to complete and according to plans will be indoors.

Ok, I think they need to calm down a bit with all the new parks being built!

Hoping Universal Studios is the next project to be revived.

Anyone know if the rest of the rides are open at Motiongate? The 'opening soon' text has been removed from the relevant rides on the website..

Baffles wrote:
Anyone know if the rest of the rides are open at Motiongate? The 'opening soon' text has been removed from the relevant rides on the website..

From what I've heard, more rides are now available compared to the last time I was at the park. However the How To Train Your Dragon area I believe is still getting its finishing touches and maybe the Shrek dark ride. The Lionsgate area has still got a bit of work that needs to be done also.

Visited today and did the whole park including Step Up in 2 hours. The Hunger Games area has a long way to go.

It's really disappointing that these rides are still not ready.

The 20th Century Fox World park has been more or less dead in the dirt since it's announcement at the end of 2015. Buzz has gone radio silent and there has been no movement as far as construction. Fox apparently was originally planned to be an entire land at Motiongate Dubai joining the likes of DreamWorks Animation and Sony Pictures Studios. However, Fox dropped out of the IP running with plans to make an entire theme park in the region. So it is highly unlikely that Fox Studios will be part of the Dubai Parks and Resorts development. This open IP space at Motiongate Dubai was filled by Lionsgate. Considering how the park is slated for opening next year and no construction has started, its pretty obvious that it has ether been delayed or cancelled.

Interestingly enough, the location of the park was to be adjacent to the original location of Universal Studios! Maybe this part of land is cursed for no park being able to be built there! 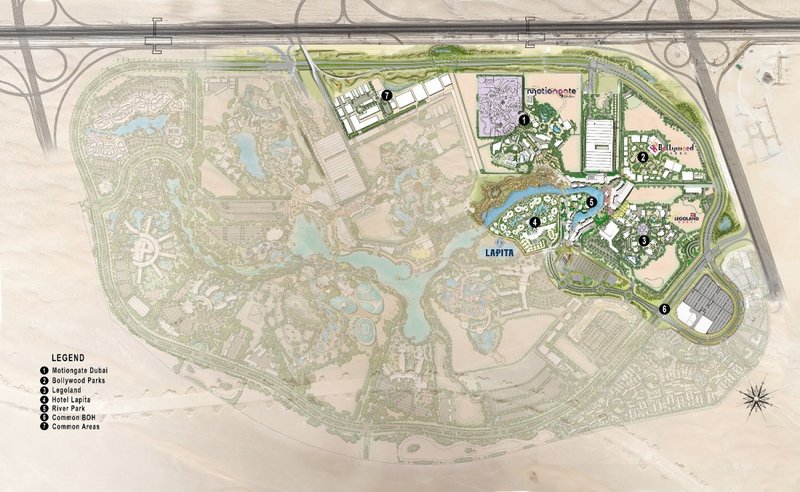 This plan has obviously changed, with where Six Flags is now going, but hey, more parks to come!

Very optimistic! Huge as it is.

They seriously need to stop expanding.....

First Legoland Hotel in Middle East to open in Dubai

The hotel, a collaboration between Dubai-based leisure and entertainment company DXB Entertainments PJSC and Merlin Entertainments Group, will be the seventh Legoland Hotel in the world and will come complete with disco elevators and Lego modelled rooms.

The hotel will be located next to the Legoland theme park in Dubai Parks and Resorts, and while developers have not announced a time frame for completion, the design is said to resemble the playful nature and Lego-themed international chain of hotels.

Lego storylines and characters will adorn guest common areas and rooms, and the hotel will be fitted with disco elevators and a castle play and adventure area which will provide for an immersive experience.

The 250-room hotel is being built on 300,00 square feet of land and will have easy access to Legoland Dubai and Legoland Waterpark.

Legoland Hotel Dubai is the second hotel within Dubai Parks and Resorts. The addition of the Lego themed hotel, along with Lapita Hotel, will bring the total hospitality offering at the destination to more than 750 rooms.

I'm actually quite worried about this, a rumour is going around that about 150 employees have been sacked, from ride ops to the heads of projects, this apparently is due to the parks not becoming profitable, even in its current timeframe. So please DPR, slow down.

From what I read the project is only 40% owned by merlin with merlin taking charge of the hotel's operations.
Top

When I visited DPR last week, I made sure to stop by the Six Flags Dubai site. 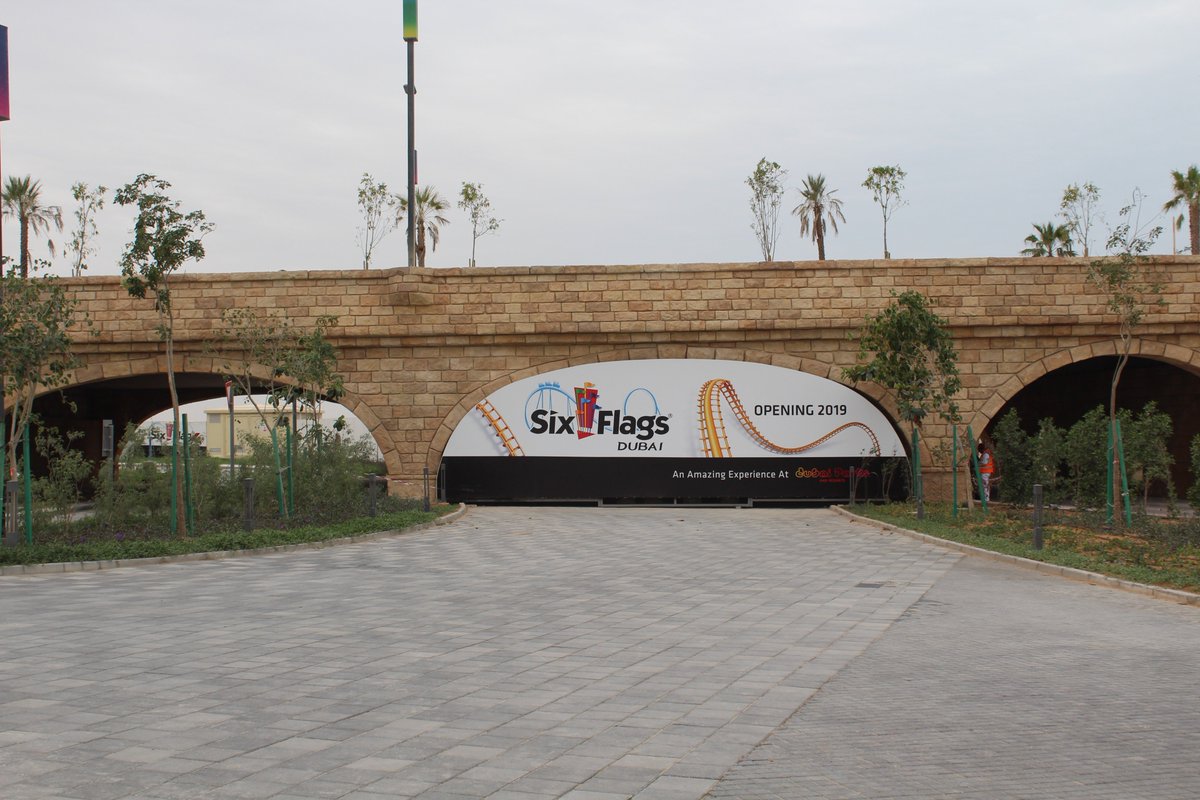 So dotted around Riverland are posters teasing the upcoming park. 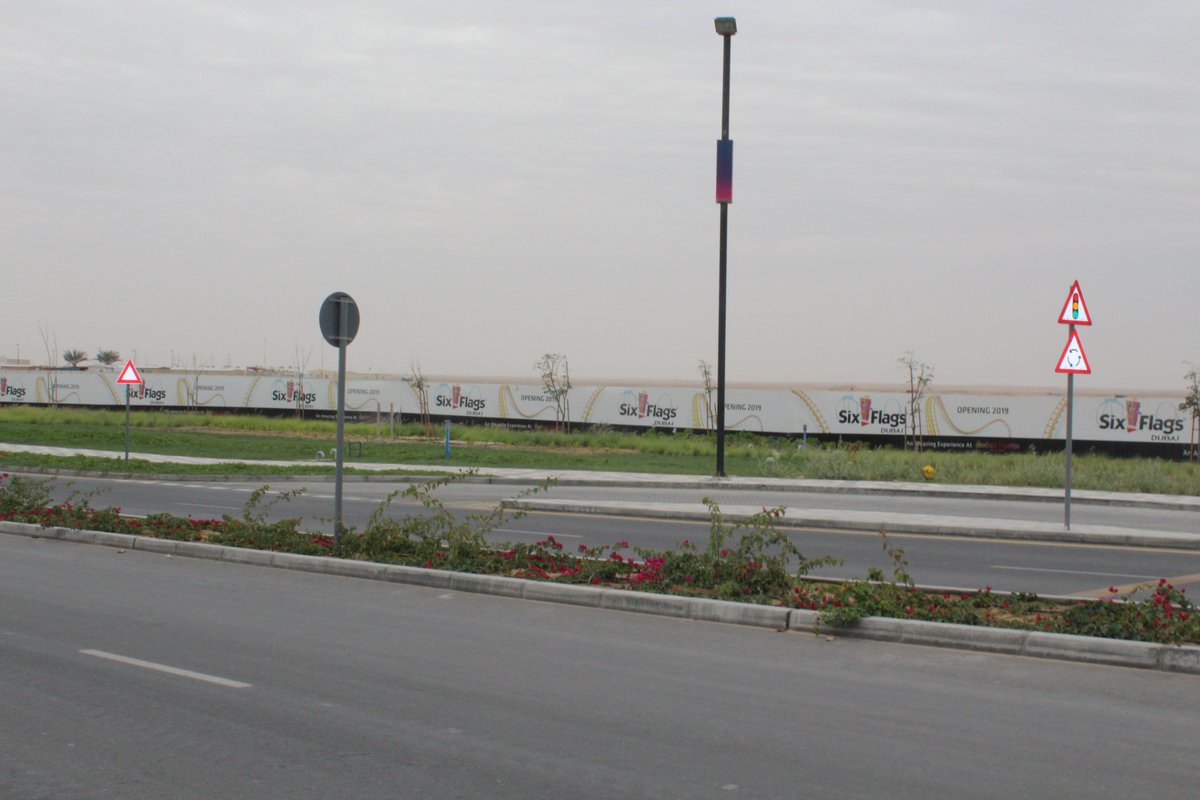 The walls of the site are also teasing the park 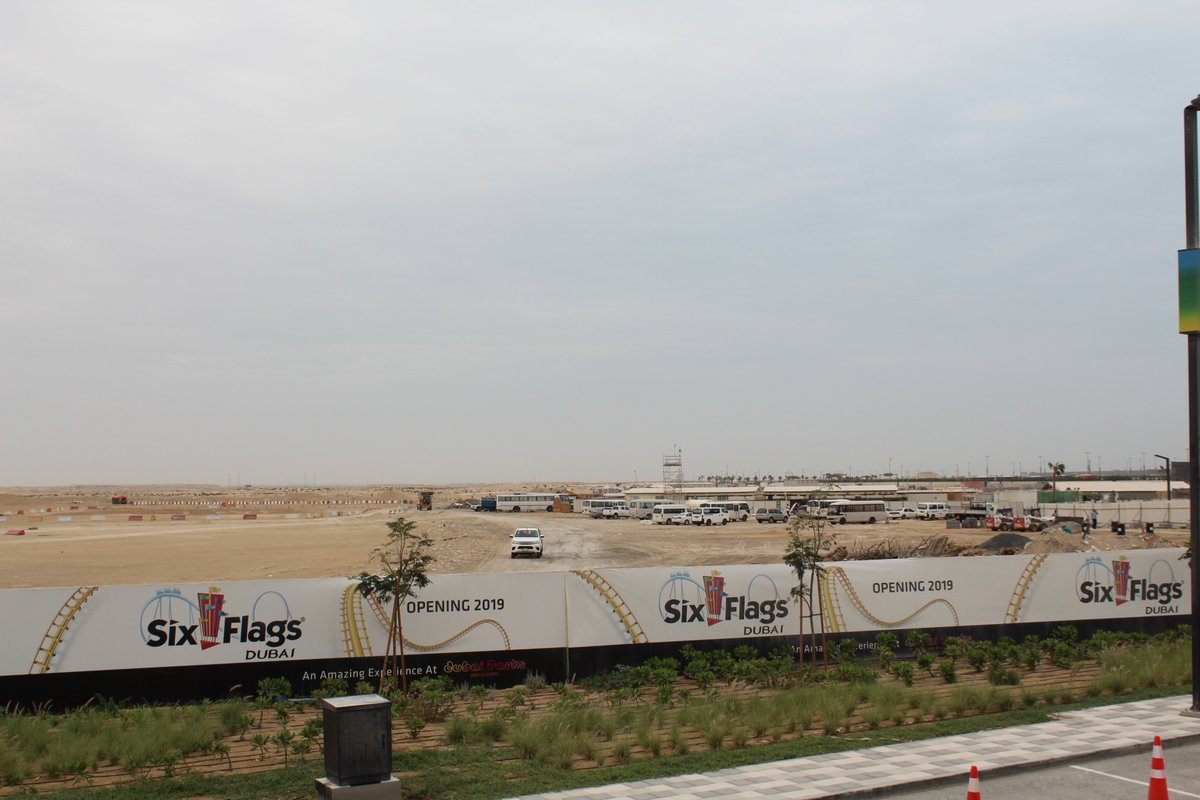 The site office and workers buses are all present 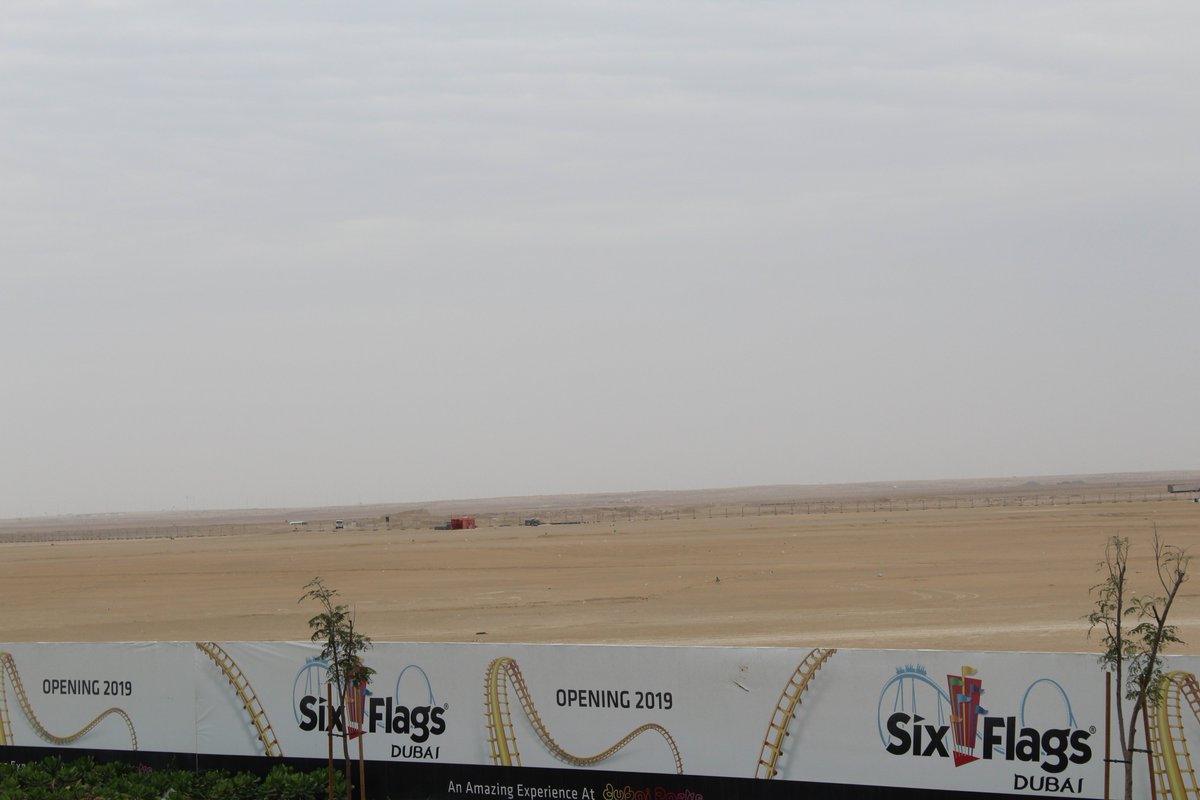 Desert land has been completely flattened as well as fences outlining the park. 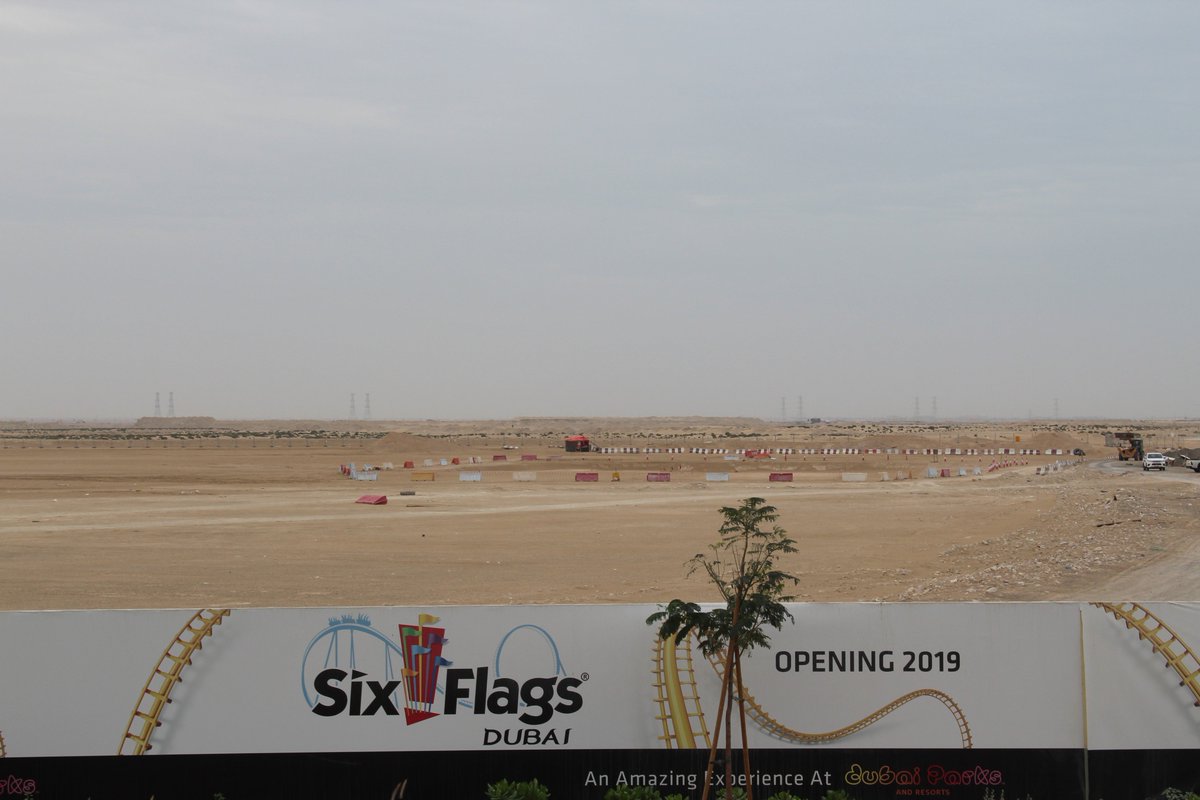 In this section a pit was being dug, I looked at plans and worked out where I was looking, I'm guessing this is the water trough for the Pulsar clone.

Slow but steady progress, but they may want to pick up the pace for a 2019 opening.