Haven't managed to find a topic for this but stated to open in late 2018 is Warner Bros World Abu Dhabi, an upcoming indoor theme park located on Yas Island.

Construction commenced in 2015 and is moving steadily ever since The rides at the park include 2 rollercoasters, 1 flume ride, 6 movie based dark rides ( 3D /4D ) and 10 other family friendly attractions. Anyway, Miral, the Abu Dhabi Government-backed company bringing the indoor theme park to the capital, said delivery and installation of rides had started.

"Warner Bros World Abu Dhabi marks an important step in the development of Yas Island as a complete leisure and entertainment destination, and we can’t wait to share it with the world," said Mohammed Al Zaabi, chief executive of Miral. "We’re very delighted to see the park coming together and on track for the 2018 launch."

SOMEBODY BUILD A B&M!

Part of the Cartoon Junction area.

Hall of Justice area for presumably a Justice League ride.

https://www.youtube.com/watch?v=ZeYrfPoqL-U
Along with this, they released a time lapse video of the parks construction so far.

All is apparently on track and the park is expected to open next year.

It looks nice, but hope it offers something IMG doesn't. I find that the indoor parks can lose their immersiveness as you are constantly looking at a roof.

Agreed, there's rumours that done of the main coasters will be a Sierra Sidewinder clone, one of which can already be found at IMG. Im hoping they might theme the roofs and room off the different areas, but I wouldn't get my hopes up.

Quick update, but someone on themeparx found a picture of some workers inside the park, whats interesting is that track for a Vekoma suspended coaster (rumoured to be a clone of Freedom Flyer) is in the background!

Hopefully this means that construction is moving swiftly and will be on track for a 2018 opening!
Last edited by Chris on Mon May 22, 2017 7:37 pm, edited 1 time in total. Update on the entrance.

We have a water tower!

A little update on the outside of the building.

Not much to report on, but the parks website has been updated, hopefully we'll see some ride info soon.

Update on the building:

Warner Bros have released concept art and names for some of the attractions in the park, which is expected to open this summer. 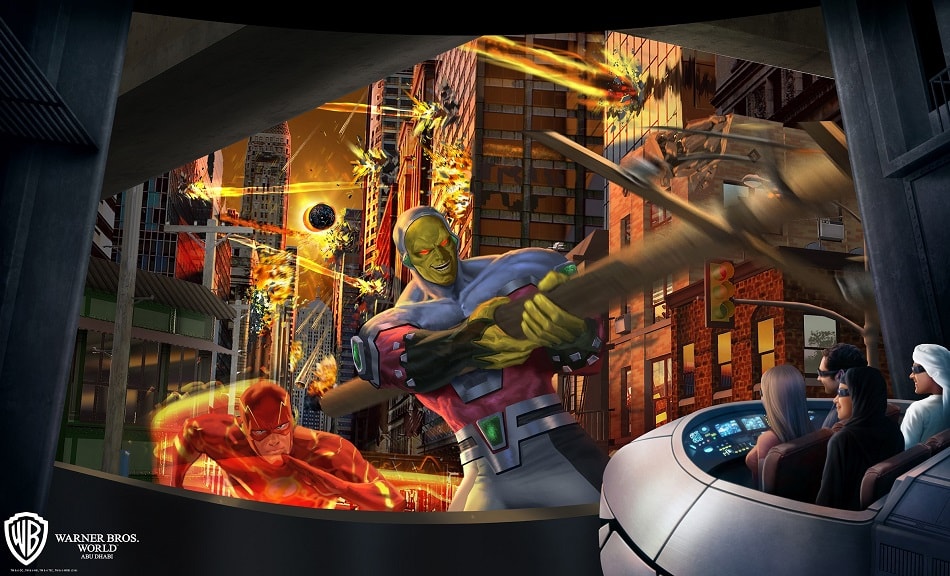 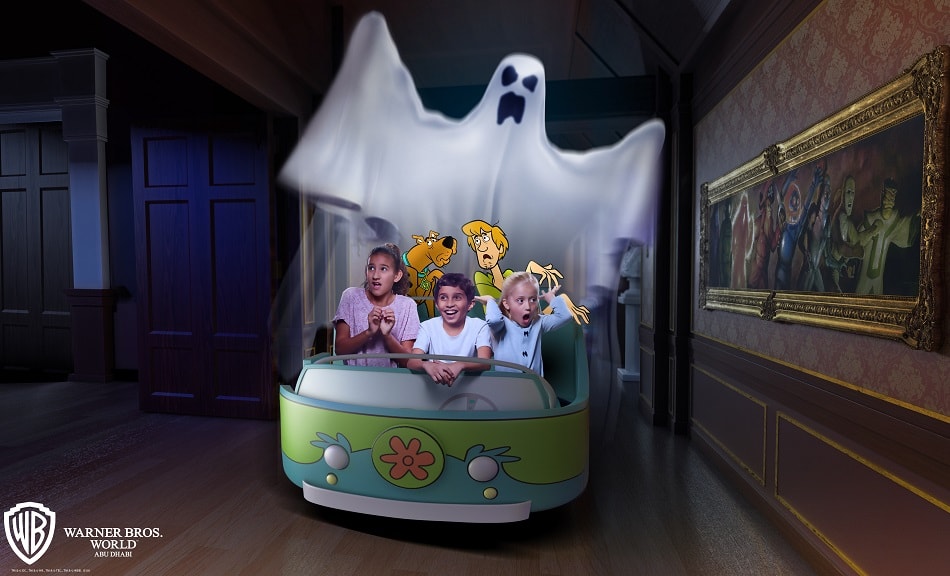 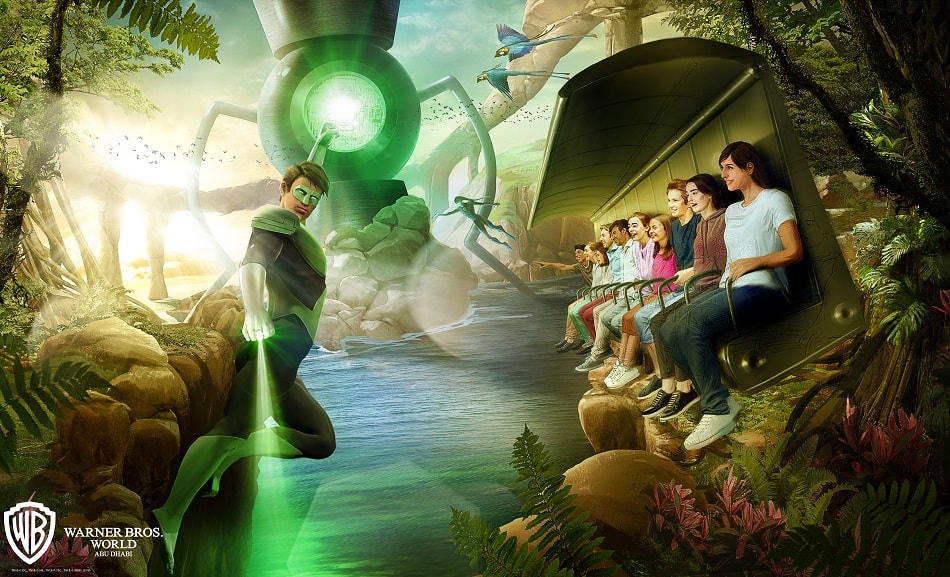 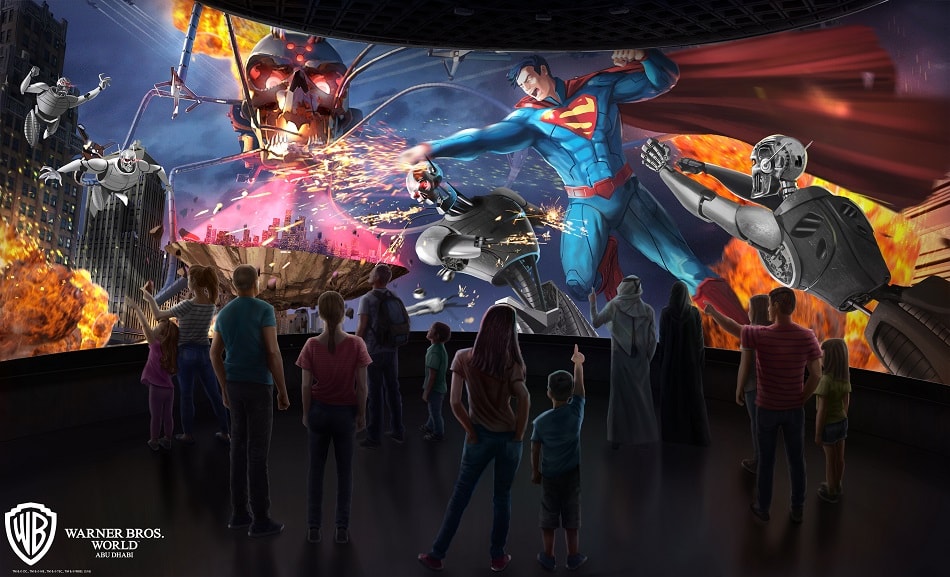 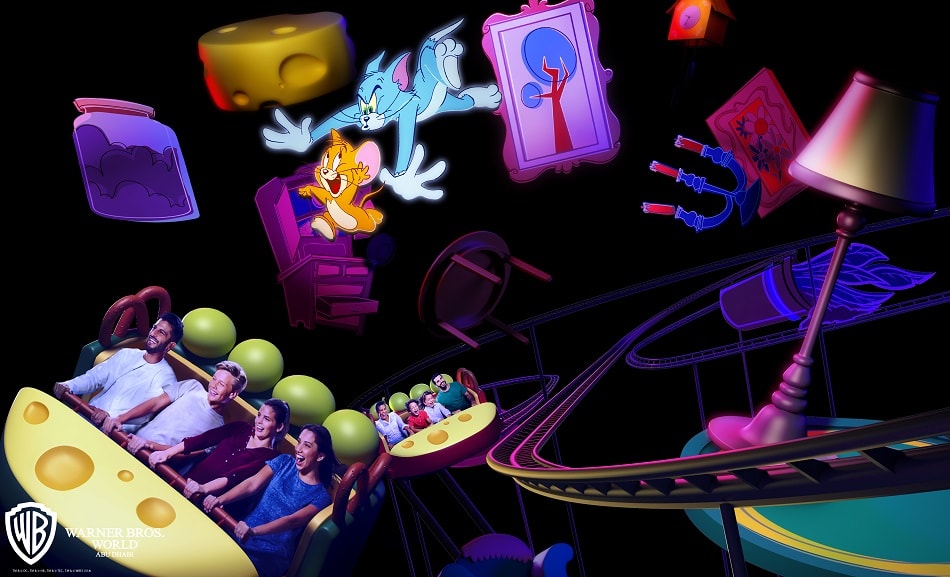 Wait they're getting two versions of Justice League - Battle for Metropolis(The ones found at the Six Flags parks) but with different stories?
[Insert Signature Here]

These rides don't have anything to do with the ones at Six Flags, other than the fact they are the same brand, this will be a different ride, I'm guessing something like Avengers at IMG.

Dubai seem to love a simulator/screen based ride. With the kind of budgets they have I’d love to see them invest in some great quality coasters... hello B&M?

The park map has just been released showing the areas inside, the park should open this summer

Park will open on July 25th!

Here are some ride descriptions and pics:

In Bedrock:
The Flintstones Bedrock River Adventure – tucked away in the natural beauty of Bedrock’s Stonetrail Park, this star attraction invites passengers to embark on a scenic boat ride through stone-age wetlands, prehistoric neighborhoods and the city’s picturesque downtown area taking in the awesome sights and sounds of a day in the life of The Flintstones and The Rubbles. Guests should know that this isn’t just any day in Bedrock – it’s the town’s Centennial Parade! Rumor has it there’s Snorkasaurus-sized trouble in store when Dino is set loose to run amuck during the big celebration.

In the Dynamite Gulch we have:
Fast & Furry-ous – This premier attraction invites passengers to climb onto Wile E. Coyote latest gadget – the ACME Road Rocket 9000 – for an exciting journey through the desert cactus and chasms joining Wile E. Coyote on yet another pursuit to catch the Road Runner. Beep! Beep!
Jetson’s Cosmic Orbiter – The Jetsons Cosmic allows guests to fly their own futuristic spaceship as they circle a space-age landing pad on a high-energy joyride.
Marvin The Martian Crater Crashers – Marvin the Martian: Crater Crashers – Marvin’s new recruits will smash the hovering space‐pods together to generate enough kinetic energy to power his broken rocket ship back into orbit —giving a whole new meaning to “kaboom!”

Cartoon Junction:
Ani-Mayhem – a visually immersive and interactive dark ride that takes guests on a rollicking mission to deliver their own cartoon chaos. Aim your “barcode scanners” to deliver ACME packages and accumulate the most points to become ACME Employee of the Month.
ACME Factory – features three kid-friendly rides like Daffy Jet-Propelled Pogo Stick, Ricochet Racin’ With Taz, and Tweety Wild Wockets.
Meet Bugs! (And Daffy) – Guests can immerse themselves in a one-of-a-kind walkthrough attraction and join Bugs Bunny on stage.
Tom and Jerry Swiss Cheese Spin – a family‐friendly spinning coaster that careens guests throughout their house on a fast-moving chase full of twists and turns (and cheese)!
Scooby-Doo The Museum of Mysteries– a family-friendly dark ride that follows Scooby-Doo and the gang in search for clues through a spooky museum filled with laughs and frights.
Cartoon Junction Carousel – a colorful twist on a classic carousel that allows guests to ride along with their favorite Looney Tunes and Hanna-Barbera characters.
Daffy Jet-Propelled Pogo Stick – a vertical “jump” tower that bounces guests up and down with Daffy Duck as he tests ACME’s latest invention.
Tweety Wild Wockets – Tweety Wild Wockets lets kids spin “awound and awound” as they try to avoid Sylvester, that “bad ol’ puddy tat”.
Ricochet Racin’ with Taz – a giggle-inducing children’s car ride that whips racers around the track at Tasmanian Devil-like speeds.

Gotham City:
Batman: Knight Flight – a highly exhilarating dark ride where guests help Batman patrol the skies of Gotham City in a one-of-a-kind robotically controlled flying Batwing vehicle capable of sudden maneuvers including drops, climbs, spins, and rolls. This ride combines a high-tech flight simulator with immersive scenery and state-of-the-art special effects for a thrillingly unforgettable experience.
The Riddler Revolution – a thrillingly roundabout ride where supervillain Edward Nigma lures guests into a run-down shipping warehouse for a thrilling nightmare. This rocking, spinning rollercoaster features dizzying movements as guests are caught at this fiendish contraption designed by The Riddler.
Scarecrow Scare Raid – a rousing flight experience with dramatic aerobatics and whirlwind barrel rolls that will rattle the cage of any bat or man. This ride blends wild interactive adventures with dizzying maneuvers from Scarecrow’s latest psychological experiments.
The Joker’s Funhouse –a villainous twist on the classic carnival walk-through experience featuring a series of physical and mental challenges conjured up by Batman’s biggest foes. The Joker’s Funhouse includes
a hall of mirrors, a shrinking corridor, a labyrinth, a hallucination hallway and moving carpets— among many other memorable encounters.

Finally we have Metropolis:
Superman 360: Battle for Metropolis – 360-degree action spectacular that pits the greatest comic book hero of all time against an alien menace threatening the city. Featuring the Man of Steel, this battle of good versus evil will decide the fate of Metropolis.
Justice League: Warworld Attacks – a thrilling dark ride featuring immersive theatre experience and special effects which will rapidly dart, swoop, and spin guests amid a colossal clash that teams them with the Justice League in an all-out battle to save the planet.
Green Lantern: Galactic Odyssey – an awe-inspiring “flying theatre” experience that transports guests across the cosmos to extraordinary worlds, enriched with special and visual effects.
Teen Titans Training Academy – a multi-level play area featuring a zipline and other physical activities that invites up-and-coming heroes to showcase their skills alongside the legendary Teen Titans. Requires climbing, crawling, and navigating uneven walkways.

Users browsing this forum: No registered users and 38 guests
×